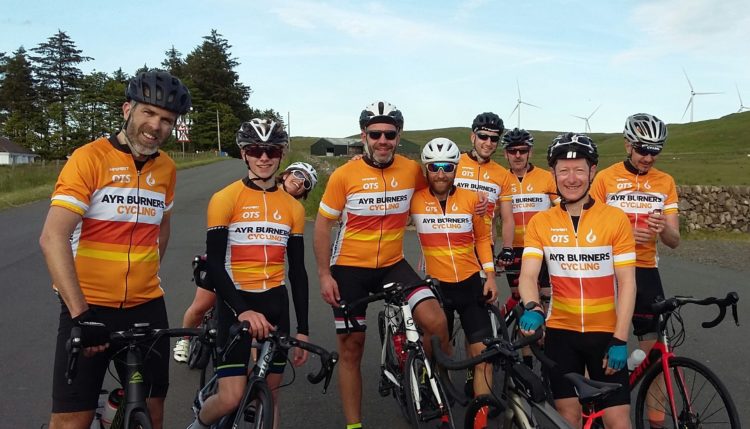 June was a pretty packed affair for the Burners with lots, lots, and lots more riding being clocked up.

We started with a group jaunt to Arran (as described in a previous post), whilst across the water on the Emerald Isle, Gary Currie was embarking on a truly epic journey – 2500kms of the Trans-Atlantic Way …

9 days later, Gary arrived in Cork, slightly weather beaten and bemused, but still smiling despite the arduous challenge.  We’ll have an in-depth update from the man himself coming up shortly.

Roll forward to the Solstice weekend where we had 9 Burners ready to Chase The Sun.  This is a 200 mile dawn till dusk ride from Tynemouth to Prestwick.   The lads and lassie struck lucky with the weather (sunny and NO wind) and hence made good progress along the fantastic scenic route that the organizers had plotted.

Well done folks ! Special mentions go to John Duncan and Steve Prince who both drove support cars for the duration of the 200 ride. Kudos !

Ride To The Sun works along the same lines but in a different format – Carlisle to Cramond.   This is just over 100 miles, arriving in Cramond at sunrise.   Hats duly doffed to Leona and Kev who completed this well-established summer Solstice event.  Last, but by no means least, was our family treasure hunt at the Troon Gala day where we had 20 families scurrying about the town searching for answers to some cunningly cryptic questions – thanks to Chris for organising and thanks to SAPI for the invite !