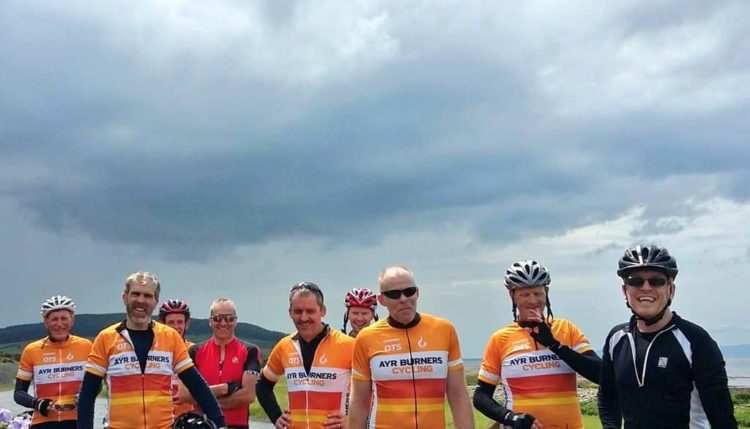 A total of 10 Burners and a guest / prospective new member (Brian from Troon) made their way to Ardrossan last Saturday to catch the boat over to Brodick for a circuit of Arran. And, as Barry Manilow once sang, it looks like we made it. Well, most of us did (but more of that later).

Despite the poor forecast, Saturday dawned dry, and just over half the group rode up from various points along the way. Furthest travelled was Duncan McArthur who rode up from Kirkoswald, but unfortunately he didn’t have time to join us for the ferry trip, so he turned round and made the solo journey back home.

The rest of the group took their cars up, in a move which would later turn out to be pretty sensible indeed.

Once on board, the first competition was to see who could eat the most for breakfast in the CalMac café. Jon Mahoney took the honours as he made his way to the head of the queue to claim an epic 8 piece breakfast.

A fairly uneventful start to the loop followed, despite the first hills over to Lamlash and Whiting Bay. However, just before the drop down to Kilmory, disaster struck. The cable for the rear mech on Anne Nichol’s bike snapped, leaving her stuck with just a couple of high gears left. Rather than struggle up the remaining hills, she took the tough decision to retrace her steps back to Brodick to get an early ferry home. Despite the Burners being a chivalrous bunch, Anne refused all offers to accompany her back to Brodick – cue many relieved waves as she set off on her way !!!!

Half way round found everyone in the teamroom at Machrie Golf Club, where a heavy shower of rain passed over while lunch was consumed. That was gone just as we set off for the much anticipated climb out of Lochranza, and the rest of the ride looked set to be completed in fine weather. That was until we reached Corrie, where a fine drizzle quickly developed into a biblical downpour. Everyone was drenched by the time we got to the ferry terminal, but it didn’t take long to dry off in the warmth of the ferry on the way back.

The rain was still falling when the boat docked back in Ardrossan, and those who had taken their cars up looked very smug indeed. However, soon there was a rapid improvement and the ride home was pretty much dry all the way.

Everyone agreed that it had been a top day out, and that we should arrange a 5 Ferries ride before the end of the ‘summer’. Watch out for it on here or on the Facebook page – if it’s half as good as this Arran trip you won’t want to miss it.