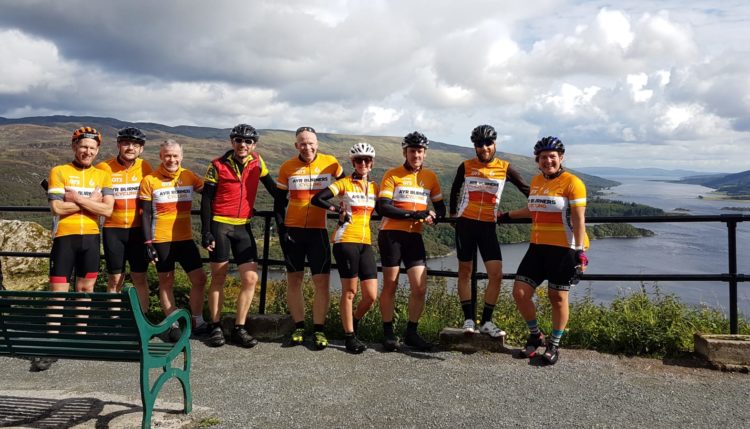 Last Sunday saw 11 Burners make their way to Ardrossan for the first leg of the much-anticipated (and slightly delayed) 5 Ferries Ride. Being a Sunday towards the end of ‘summer’ meant the boat was pretty quiet and everyone managed to get to the café without resorting to rough tactics.

As you may expect, as soon as we landed in Brodick the heavens opened, and the rain didn’t stop until we were almost in Lochranza, but the sun appeared and was never far away for the rest of the day.

Straight out of Claonaig, another hill was despatched and it wasn’t long until we found ourselves in Tarbert – with plenty of time to kill until the next boat to Portavadie. Needless to say, some mischief was to be found ….

Thankfully the rest of the troops were slightly better behaved (although is that a fish supper, Mr McArthur ?) ….

At the slipway, we said farewell to Leona who was off to see her grannie, so the rest hopped on the boat, with the longest stretch to Colintraive to follow (including a little incline out of Tighnabruaich). An exhilarating descent from the viewpoint was worth the trip on its own and soon another slipway beckoned, this time in Colintraive.

Unlike the rest of the ride, Bute is flat as can be and the average speeds got a boost – possibly the incentive of hot food in Rothesay played a part in that too. Even better, the ferry back to Wemyss Bay had a nice beer selection to help us rehydrate after a fun, but challenging day on the bikes.

The day the Tour of Britain came to Ayrshire