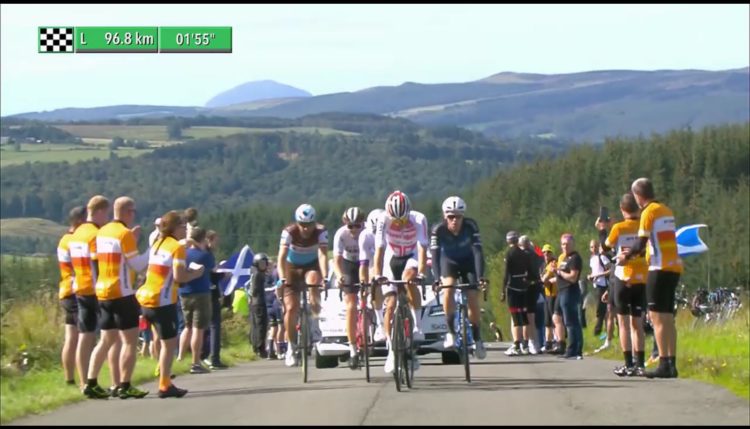 The day the Tour of Britain came to Ayrshire

On Saturday morning (slightly later than the normal 9.30 start) over 20 Burners gathered at the Burns Museum to ride out to watch the Tour of Britain on their way to Kirkcudbright from Glasgow.

The orange peloton had a head start on the pros as they made their way over familiar roads through Dalrymple, Kirkmichael and Straiton, all of which looked lovely in the late summer sunshine.

It was a bit surreal seeing Movistar, Lotto Soudal and Ineos team cars waiting in lay-bys round about Grimmett (presumably in readiness for a scheduled feed stop). It reminded us of how big an event this really is.

From Straiton, it was a sharp left turn up Lambdoughty Hill (or Largs as we know it) where the first of the days KoMs was being held. Crowds were starting to build at the top, and there were plenty of pedestrians walking up to the top, where we met our friends from Ayr Roads and Coylton CC. The chocolate cake from the ARCC gazebo was certainly welcome after the climb up to the top !!!

The sun stayed out and kept us warm as we followed the progress of the race on mobile apps to see how long it would be before they’d reach us. The number of police, para-medic and race control motorbikes steadily increased – these guys were certainly enjoying themselves on the country roads – as the race drew closer.

Shortly after, about 1min 20sec actually, the main peloton came through en-masse, led by Jumbo Visma. Mikel Landa and one of his Movistar team mates made up the rear as they tried to re-join amongst the cavalcade of team cars that followed. Mikel Landa !!! In Straiton !!!!

After they’d all passed by, it was time to jump on the bikes and follow the pros over to Dalmellington where they turned right for Kirkcudbright. Instead, we went left and returned to the Burns Centre via Patna, Ballycoach and Dalrymple again.

Soon we were sitting in the sun enjoying coffee, scones and a gentle game of wasp-swatting reflecting on what we’d just seen. Then it was off home to watch the recorded highlights to see who we could spot on TV. Turns out that was pretty much everyone – the Burners jerseys really stand out in a crowd !!!!