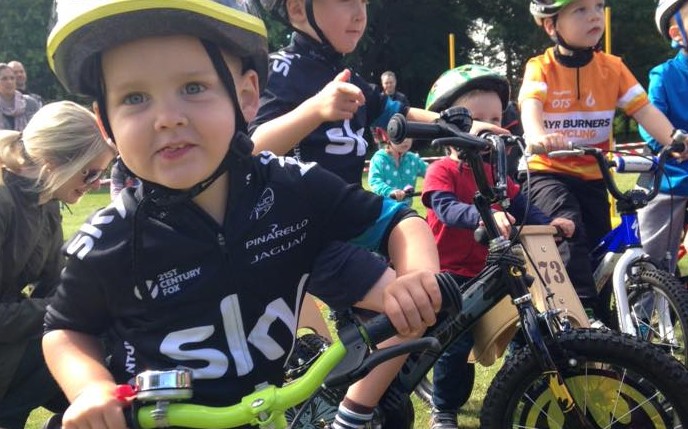 Tour Fever! Weekly round up

Where to start this week?

We had a record breaking turn out for our third Balance Bike session, we saw Joanne beat the boys in the Summer Series, and our new Tour de France inspired Strava Series kicks off tomorrow.

After a night of rain, the sun came out once again for our Balance Bike Games at Belleisle.  We were expecting to welcome a full class of 16 to the session and were almost overwhelmed to welcome 19 riders age 2 to 6!  Fantastic to see so much enthusiasm from both parents and youngsters. 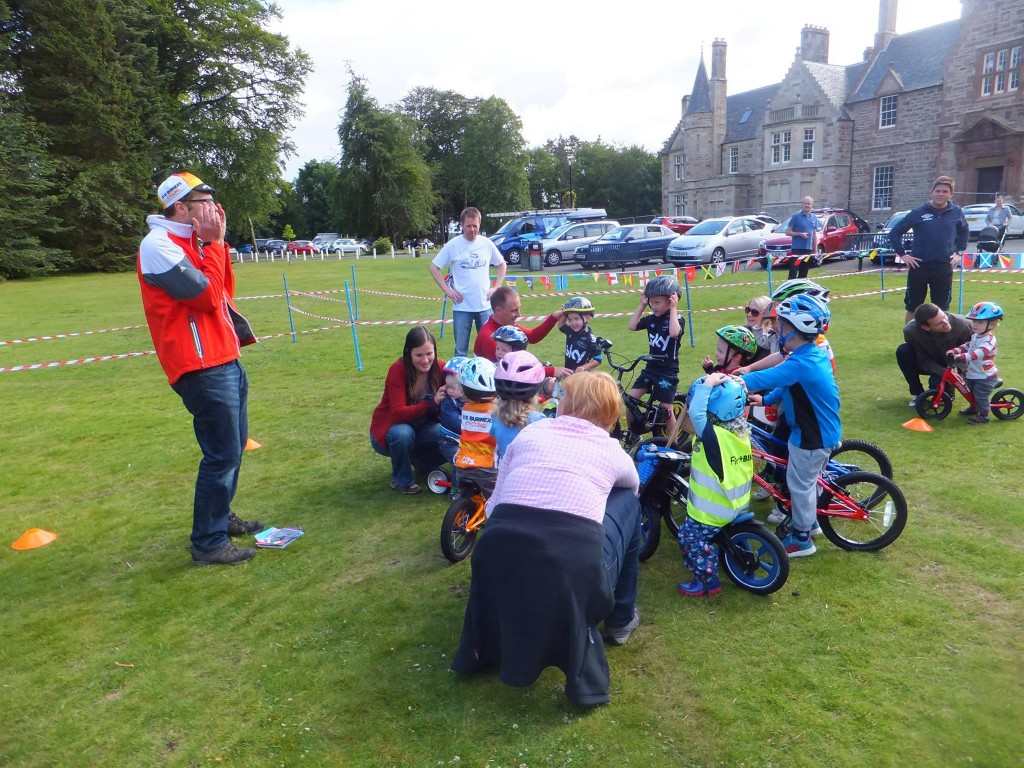 This week we set up a full course round the perimeter with some obstacles in the middle to allow more free-play.  But just as the adults were starting to relax it was time to gather into the centre for a stirring rendition of ‘Helmets, Shoulders, Knees and Toes’.  Big thanks to Burners regular Ryan F for rousing the crowds.

The wheels on the bike go round and round, especially when there are fires to put out and fish to catch.  Frances and Marie laid on some delicious cakes to provide a sugar rush to see us to the end of the session.  And what better way to finish the games than a trip to the magical playpark at Belleisle? 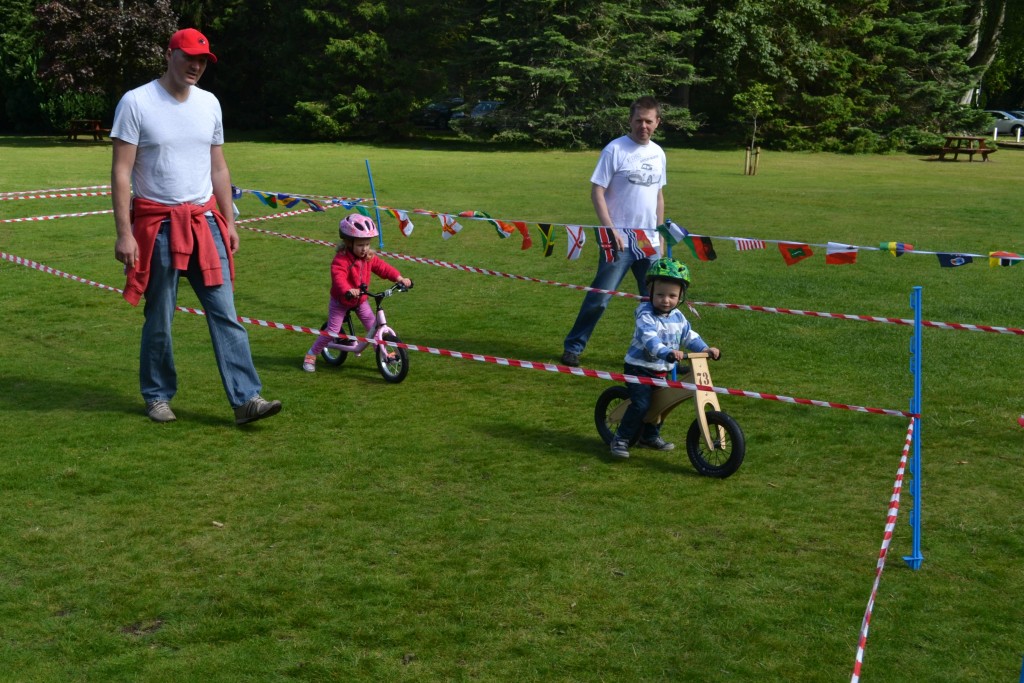 Big thanks to everyone who attended today.  With summer holidays coming up we’re going to take a short break before putting on another session in late August.

The format for round 5, the Marine Drive GP, was two and a half laps of a quiet circuit near the Irvine, with ability groups.  Each group had to work together and no one could be dropped, unless the group behind caught up. 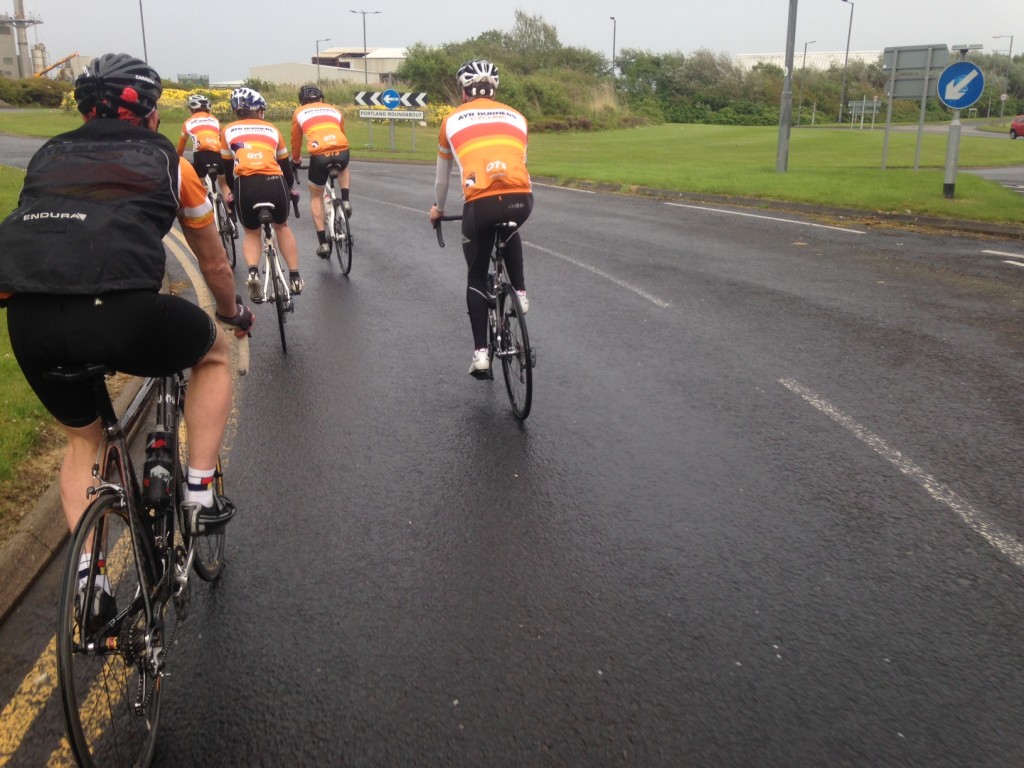 Lindsay, Cammy and Joanne formed group one, with a 5 minute head start on group 2, featuring Gary, Chris, and Jonathan.  Then came the protests from the scratch group as our man-in-black, JP, wanted an easier ride than Peter and series leader Scott Knox because he had ‘the wrong tyres’.  Group 3 was meant to set off three minutes behind group two, but along the way they got into deep conversation and missed the start.

Not until the the last quarter did group 2 catch group 1, picking up Joanne as a passenger.  Group 3’s scintillating conversation had left them out the running.  On the final dash to the line no one would go near the front.  Jonathan attacked, Gary chased.  Chris countered.  Joanne waited.  With the boys worn out it was simply a matter of turning on the speed and racing past them to the finish line.  Mark Cavendish eat your heart out! 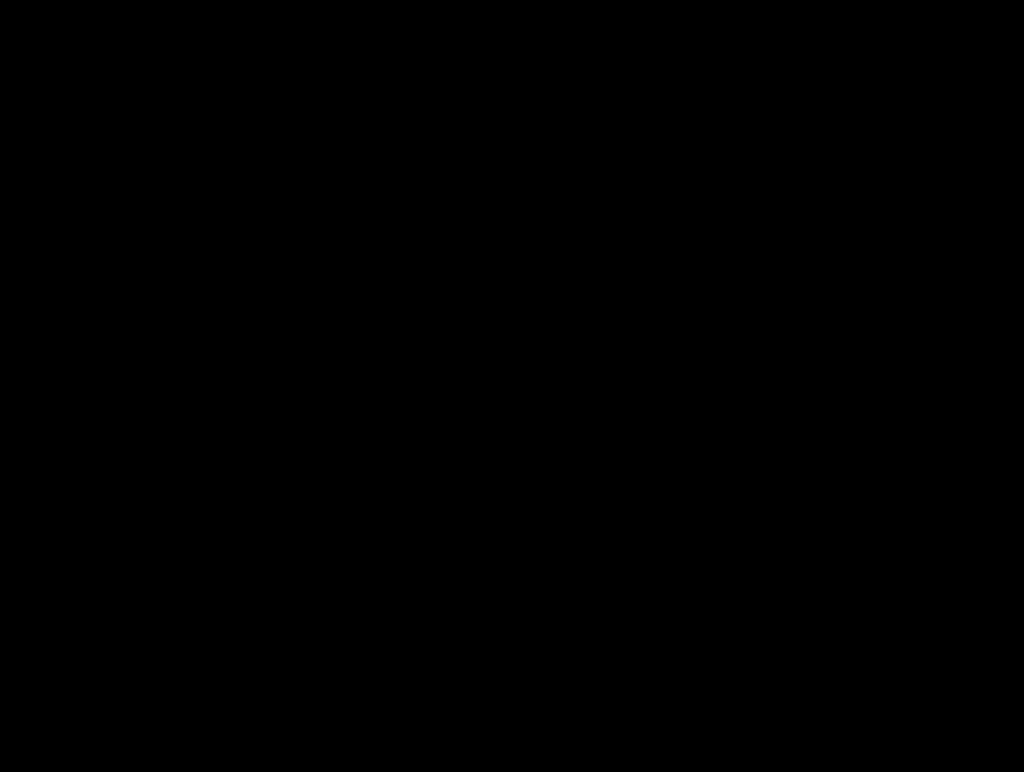 Scott maintains his lead, for now.

The Summer Series will be contested over the best six of eight rounds.  The next event is the ‘Skills Olympics’ on the 23rd. 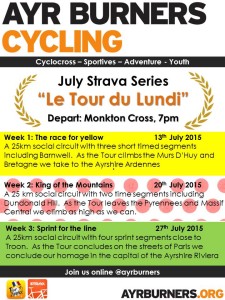 Our three week Strava series inspired by the Tour de France starts tomorrow night.  Over the next three Monday evenings we are meeting for short road rides chosen in tribute to the parcours of the Tour.  This week the pro peloton raced across Belgium to the Mur d’Huy, before going cross country to the Mur de Bretagne.  Our closest equivalent is the Barnweilberg and the Wardneuk Wall.  The winner in week one will proudly carry our special Bidon Jaune for week 2.

The pace of these rides will be relaxed, and there will be no pressure to race up the hills so come join in the fun!

We’ve had a few enquiries about what level our rides are at, so we are going to trial a new star rating all our events to help identify which appeal to you.

Star ratings will still be subjective for some rides, but let’s give it a try!