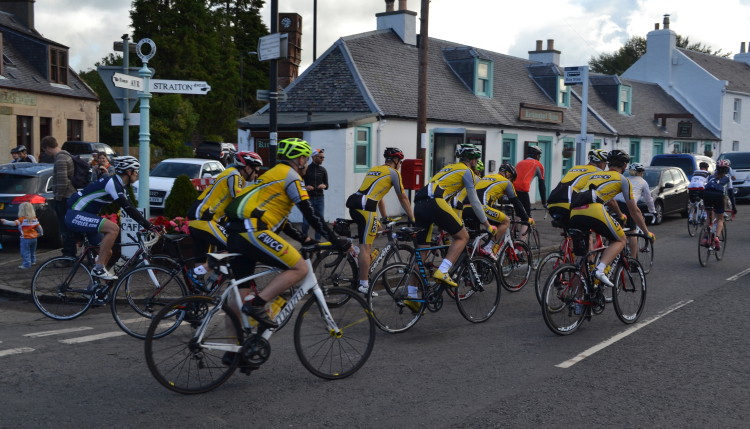 The Best Of the FPP Ayrshire Alps Friendly

Phew! We had a truly wonderful day of cycling at the FPP Scotland Ayrshire Alps Friendly. As the dust settles and we catch our breath, we take a look back at 10 of the highlights of the day.

When we first launched the idea we were expecting half-a-dozen riders from Walkers, Ayr Burners and Fullarton Wheelers to show up.  In the end we welcomed 92 riders from Ayrshire and beyond.  Big shout out to Irvine’s Fullarton Wheelers who fielded a team of 18.  Others on our start list included: Ayrodynamic Triathlon Club, Ayr Burners Cycling, Ayr Roads CC, Carrick CC, Coylton CC, Dunlop CC, Wallacehill CC, Glasgow Green CC, Walkers Cycling Club, Deeside Thistle CC and Bishopbriggs Falcons CC.

Riders aged 10 to 65, novice to racer – brilliant to see so many colours being worn.

The real star of the show.  As the routing teams commented on Saturday night “We don’t ride here enough”.  The reality is we ride here non-stop, but never get bored of those views.  We had panoramas of Ailsa Craig ascending Blackie’s Brae, Glimpses of the Merrick descending the Nick, and views right up the Ayrshire Coast from Glenalla.  We haven’t even mentioned the idyllic hobbit-like lands of Straiton either…  Great to hear riders from further afield confirm how awesome a setting this is! We’ve heard one rider describe the route profile as a see-saw. Fitting description!

It was like a massive Bake Off competition.  The friends and families of Ayr Burners had been hard at work preparing an odyssey of sugary snacks for hungry riders.  Huge thanks to all the donations.  Especially to whoever left the ‘Rum Sponge’! 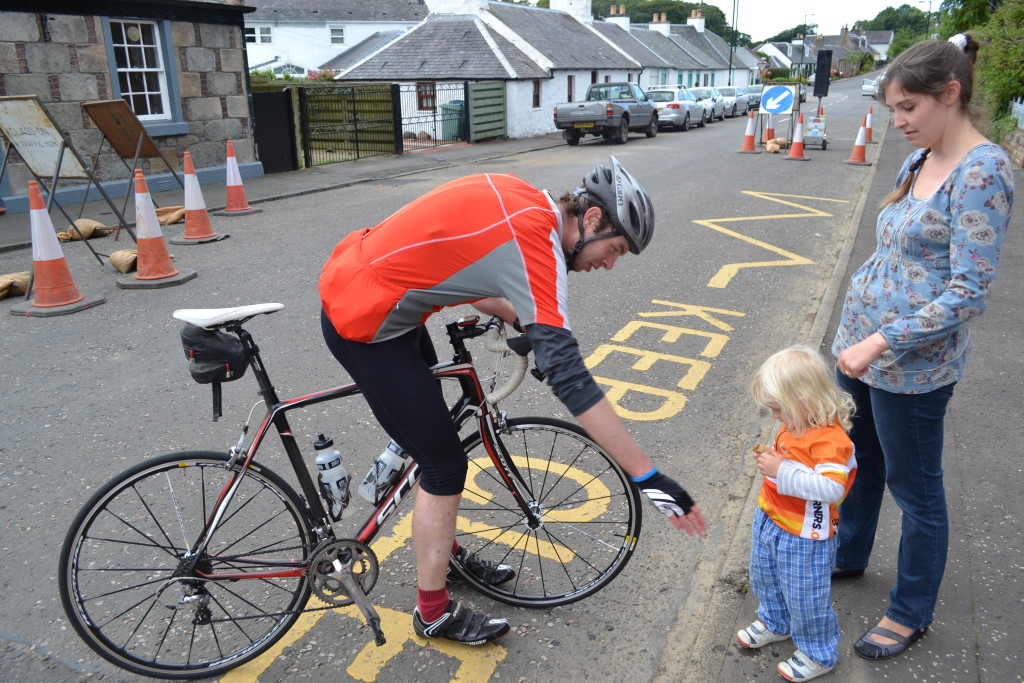 We were proud to have along one of our young ‘Sparks’.  Two-year-old Kenneth proudly pulled on his top as he took on the important roll of ringing the bell to set the riders off.  A regular at our Balancebike games, Kenneth had come out to see Uncle Alasdair take on the 100km route. 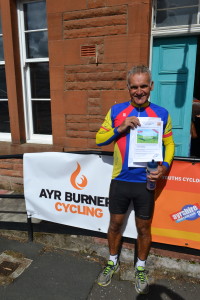 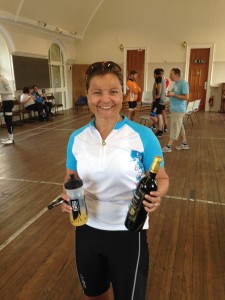 6. Tim’s Amazing Elliptigo Tim was one of the very first people to join Ayr Burners, back in December 2014.  On our first outing up the Carrick Hills we were all amazed to see him charge up on his special runner bike.  Fast forward 9 months and we are amazed to see him take on not just the 100km route on his amazing bike, but to learn he rode out and back to the start from Ayr as well.  The whole time he had no opportunity to sit down.  We don’t know about you, but Tim is making us feel very very lazy!  Chapeau 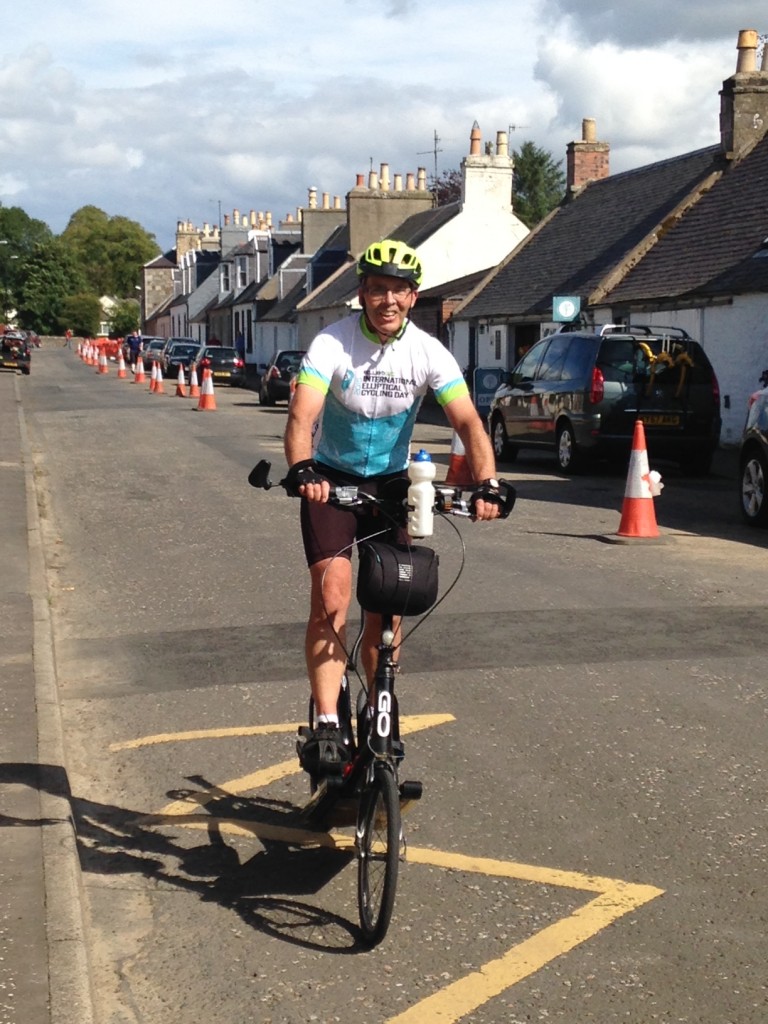 7. The camaraderie We mentioned the size of the field at the start, but not yet the quality or the friendships formed on route.  Its one thing to see names or start sheets or strava, but what a great change to catch up and make plans to do more cycling.  Hooray for Ayrshire cycling!

Among the many amazing people to take part was Patrick Kiehlmann.  Last year, aged just 11, Patrick completing Lands End to John O’Groats in just 11 days.  Supported by his father and support team, Patrick raised an incredible £5,000 for Yorkhill Children’s Charity – a cause to whom he owes his life.  Patrick has recently been nominated by just giving as their young fundraiser of the year.  It was a real privilege to have Patrick along – not only is he polite and very modest, but he is also tactically very smart.  “We hear the wind from Dalmellington to Patna was strong?”  Patrick: “I didn’t really notice it, I made sure to shelter behind the Fullarton Wheelers”.  Smart guy!

Today Patrick was joined by his younger sister Beatrix, who completed her own challenge across the hills in the colours of Falcons CC. 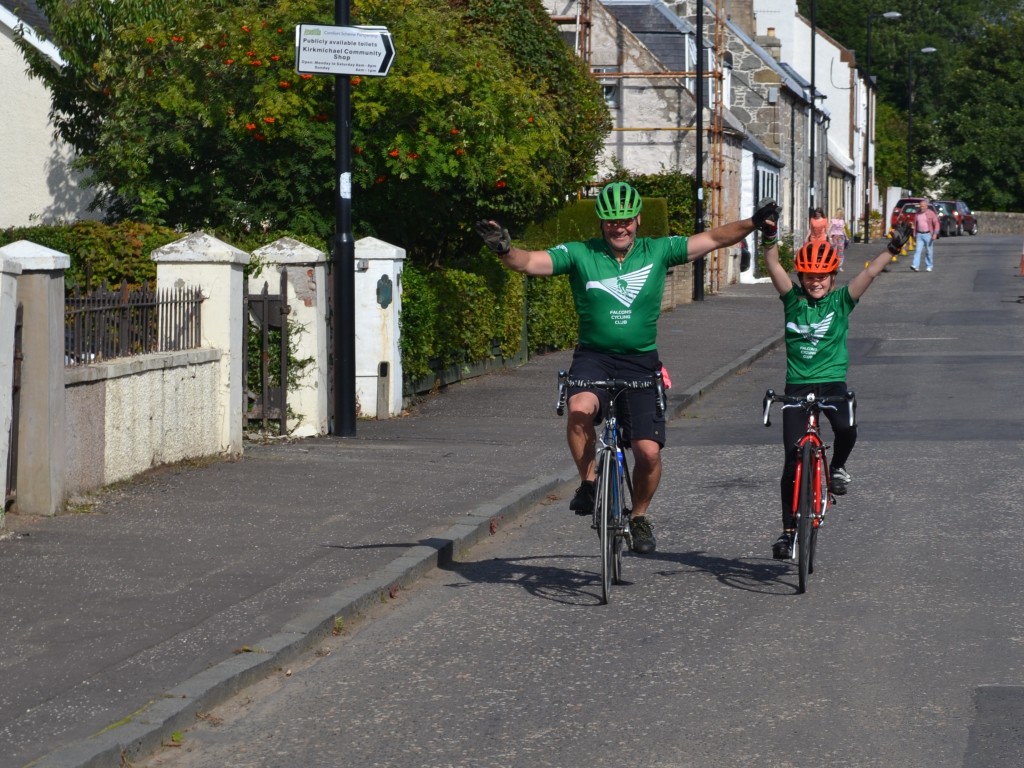 Let’s be honest, for all our organisation, what made the day was the weather.  Finally the sun gods delivered for us.  Light winds, clear skies and perfect cycling temperatures.  Short sleeves in August – oh yeah, now we are talking!

Big thanks to everyone who has responded positively to the event.  This was Ayr Burners Cycling’s first open promotion.  We are all chuffed to hear that people enjoyed themselves, and this gives us real confidence as we explore the opportunity to repeat the event in 2016 as a Sportive. 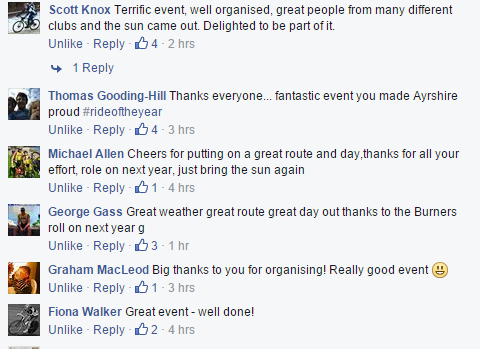