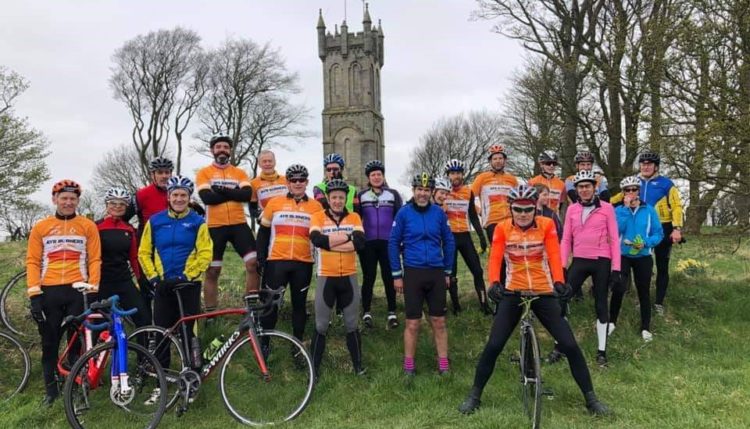 This years edition of the Ronde van Ayrlaanderen saw competitors kept on their toes with some new bergs (climbs) and some extra mileage bolted on to previous formats.

Ronde van Ayrlaanderen ? That’s the name given to The Burners homage to the best and without doubt the hardest one day race in the professional cycling calendar  – The Ronde van Vlaanderen  (Tour of Flanders).

20 riders set off from Monkton with 8 timed sections to tick off. These times would be added up through the power of Strava to provide an aggregate time for each competitor.

The traditional opening climbs of Corraith and the Rumbling Burn gave everyone the chance to warm up the pistons, with new sector 3 (Muur du Old Rome) allowing the puncheurs to flex themselves on its short slope after 8 miles.

Sectors 4, 5, 6 and 7 are where the bigger time gaps started to appear as the climbs became longer and legs became softened.  Staffler (4) led us onto the real deal of Barnweil (where Wallace told us that “the barns of Ayr burn weel”) with its unrelenting stats (5%, 1 mile, 259 feet) coupled with its ‘rustic’ surfaces.

The longest sector of the day (Muurgersland at 1.6 miles) led the group onto the brutal 16% slopes of Rammagetonberg where the days leg damage was finally done.  The final two segments (Wardneuk and Gannet Sprint) were played out with the top spoils and the hallowed cobble looking to have almost certainly made its way back to the McGarvie mantlepiece for the second year running already (in emphatic fashion).