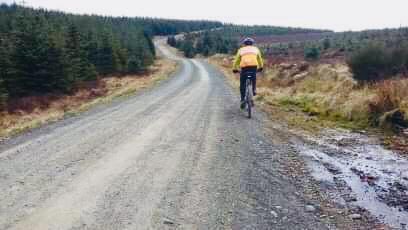 An Epic Tale by Gav McKellar

Sometime ago in 2018, it was decided that doing the 4th edition of the Dirty Reiver in Keilder Forest on April 13th 2019 would be a good idea, even better would be camping out before and after 200kms of gravel roads in the middle of nowhere.

Fast forward numerous months, turbo sessions and long winter jaunts and myself (Gav), JP and Kev Pugh were signing in on the Friday night (12th April) in Keilder Castle….

What struck me on arrival first was just how desolate the place was, we had driven for what felt like hours through moors and forests to reach the village of Keilder. On arrival we were met with a huge array of camper vans, fat tyre bikes and beards, lots of beards. The hipster scene is still very much alive in this bustling Gravel scene !!!

The Dirty Reiver is an American born and based event, in America the Gravel racing scene is huge and this is now filtering over the waters here. It is a great mix of abilities, beards and bikes and one big, big party. As we arrived the flags were flying, coffee machines buzzing and we collected our first freebies, and met a very enthusiastic Dutch man giving out Free Beer!!! Getting stuck into this real ale we sauntered around promo tents and ummed and awed at the sights on offer. At sign on, JP had a rather strange Orange number – a sign? No, sadly not, his number was lost and they’d given him a new one. We dropped off our feed bags to be taken to Stop 2, mine Tuna wraps, jelly babies and biscuits ! JP kept his foot long baguette tucked in his jersey pocket and placed the rest to go. In my head I had Jo’s words ringing in my ears from a training ride we did a few weeks prior where her hubby arrived home mid-bonk having not eaten during the ride….. kept it in my head to feed him during this epic adventure and keep Mrs B happy so the jelly baby bag was doubled to share the rations.

We then headed to the campsite, 20 minute drive away and saw several route signs en-route, nerves were kicking in, oh and did I mention it was cold, by now showing 1 degree in the car. Setting the tents up, beers in hand we had a burger on site and settled down in our tents for the night.

Alarm went at 0600hrs and we woke into sub zero conditions, minus 4 to be exact….. Kev was already showered to try and warm up, I had to de-frost the car and the bike saddles, scoffed porridge, coffee and we set off for a 0740hrs brief.

Getting the bikes off the car the cold set in, even colder with the wind chill, a wave and chat with fellow riders and mad Ayrshire men who’d also ventured down cheered us up, as did the great promo chat from the organisers and the Forestry Commission on the line. 1200 riders set off at 0800hrs for a 1 mile long neutral ride to the start. The Grand Depart was awesome, bells, cheers of support, big waves and the sun was shining! The taste in my mouth I suddenly realised was minerals from the gravel road stour, dust everywhere, clouds of it coming off riders tyres.

JP and myself were on 29″ wheel Mountain Bikes, Kev on his Cx bike. Immediately on every descent there were Cx riders stopped, punctures everywhere but thankfully Kev kept going, no issues with his tyre choice.

I tagged onto the Army Team riders and didn’t realise I had dropped my fellow Burners so a quick stop in some bushes for a call of nature and I turned round, was that Orange in the distance, were they by me or behind me? I needed to keep going. I met another rider as a frozen rain shower set in, my lord this was cold, Baltic even, and only 20 miles in, we chatted and kept riding along. A great descent into the first feed stop and I spotted some coffee urns, heat, I needed heat! Scoffing flap jacks, coffee and jelly babies, half a frozen banana I suddenly saw JP coming in, Kev had a back injury and was backing off to roll home easy so it was me and him, sorry Kev, hope it heals soon.

35 miles in and we realised we still had 80 miles to go and the day was beginning to drag, miles went very very slowly but we were comfy enough on the Mtb’s. Still the trail was littered with broken Cx bikes and then a huge descent appeared. Suddenly the rider ahead went over the bars at plus 30mph, Garmin, Di2 and bodies everywhere. Trying to treat and help a rider in those conditions was challenging but he came to and other riders went ahead for medics. We got the rider and bike together and took him out the forest to Forestry Commission staff marshalling a crossing where medics were coming.

We trundled on, taking turns in a bunch on the main road with a Lothian Tri rider, hard on a fat tyre bike with a blaring head wind!! The tar turned into gravel again and on to the side of the Keilder water into fast flowing red ash paths, superb riding and great fun and suddenly the sound of music hit our ears, the smell of wood burning also?! The Alpkit feed zone at Stop 2 suddenly came out of nowhere in the woods. Teepees, bean bags, fire pits, music, this was superb, what a stop, cold but great fun! We heated up over the fire barrels, ate our drop bag supplies and trundled on.

Feeling surprisingly ok but cold we kept a steady 13mph average. Coming across random farm houses in the middle of nowhere, amazing sights of hidden valleys, forests and hills, rivers and wildlife, this was superb, an area I’d never been to before was surpassing all expectations.

Remembering Mrs B’s words my hand would go out for jelly babies to feed JP, his huge baguette still sticking out that back pocket. By now we were nearing 70 miles and the pain was setting in, still 50 to go. JP took us up the hills, I held the flats and we worked well as a team, just pacing each other, bikes churning away, the odd chat to other riders on the way, small talk now though as the bodies battled the cold wind and energy sapping climbs over rough roads.

At 80miles we suddenly came into a village, sign posted to the village hall we met the most super feed stop yet, boiled tatties with cheese on offer with hot coffee and the now standard Shimano service vehicle. JP’s bike went onto the stand for a headset repair so I gathered two good helpings of hot tatties and cheese and got us fed, taking on as much as we could including, by now, pain killers – backs, necks and legs were feeling this. A quick coffee, more jelly babies… and we re-mounted, ouch this was sore. Still 40 miles to go as well.

A great descent put out Mtb’s by a few riders and onto more tarmac we worked together again. By now we were making small stops ourselves, 5 minutes here and there for a stretch, gel etc. Hands were so numb (no pictures) and cold so the wind jackets were on, Ayrshire Alp snoods up over the face.

10 miles later a big climb came after sapping lumpy gravel. Another quick stop for a mechanical and riders passing by shouting “don’t give up now!” got us back on a into rhythm, suddenly we were crossing the main road, over to the Keilder water with marshals shouting support and the words “you’re nearly done!”  I was by now hitting a hard place physically and mentally. The wind over the dam was horrendous and The Lauf special stage was sprung on the other side. This turned into nearly 10 miles of the hardest, roughest riding I personally have ever done. JP took the lead on the hills no problem, I struggled to hold his wheel but as we had noticed before my bike took the downhills faster so I played a game of letting him go on the hills and catching on the descents. I couldn’t talk to anyone by now, 110 miles on an Mtb on this terrain was brutal and had taken its toll, hands, legs, bum all numb, I had hit a wall mentally and physically and needed to finish quick.

A huge rocky descent appeared, this was the Lauf Special stage after all, built in to promote Cx bike suspension forks with the fastest riders winning forks and places into a Norwegian gravel event. Wow, did it finish us in style, sapping every last wee bit of life out us both. I could see on the next climb a big Lauf Stage Finish banner and got my head down thinking JP will catch me on the rise again.

The last few miles I can’t really remember, it hurt bad. Keeping the tempo going and head down I rolled along the side of the Keilder water, passed a sign saying 1 mile to the Castle, the start then only to get directed in the opposite direction.  JP wasn’t with me now, I felt bad but wanted home and couldn’t slow, I knew he was with the Lothian Tri rider we had met previously and I wasn’t much company to anyone now anyway. Following a very fast flowing red ash path I suddenly broke out of the woods, disorientated I quickly realised this was the road up to the castle, lined with supporters, all cheering, ringing bells and my head went up, I locked the front forks out and got up out the saddle, sprinted up that hill and over the line, at last.

Kev was there waiting, how glad was I to see a friendly face for help. The organisers gave out a finishers badge and time slip while Kev went straight to the free hot food stall and lifted a hot Chicken Kebab wrap thing, absolute dynamite food but where was JP ? I felt bad at leaving him and worse now he wasn’t in with the Lothian lad. Suddenly here he came and rolled in, eyes blood shot from the stour and face filthy. Once he had his hot food and we sat in a tent having free non alcoholic beers he explained his quick release had come loose and rear wheel slipped just a mile out from the end, damn.

We had done it, Kev had his own battle with injury but completed a shorter route. JP I and I took just over 9 hours moving time to do the 185km route, short of the 200km due to a diversion for forestry works but could I do another 15km?

Loading the cars up after 10.5 hours out on the bike we made a team decision to pack up the camp and drive home for a warm bed and proper sleep. Getting home at midnight was worth it as that was a hard, hard day. The next morning a woke up with numb hands, took a week to feel better but cannot wait to re-book that event, honestly what a day, so well organised and presented.

Everesting and Strava Series Round 3 – Tour of the Alps 2019