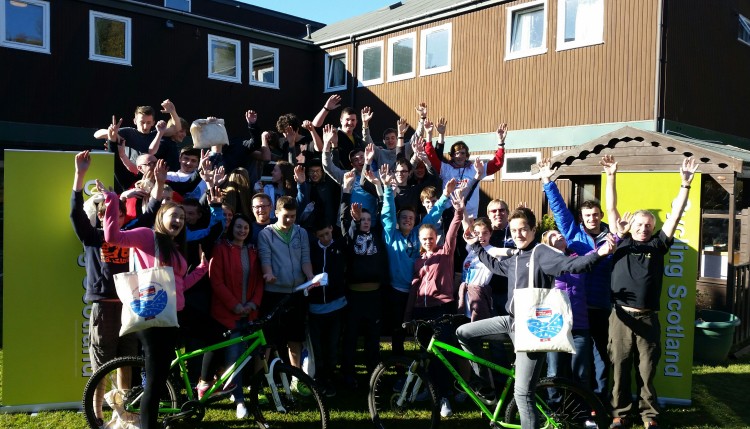 When we discovered from his father Alasdair that Ayr Burners’ Douglas Glendinning had won a place on a cycling camp for secondary school pupils we had to learn more! Here is Douglas’ account of a week in the peaceful Cairngorms national park…

Cycling Scotland had a competition to give schools the chance to go up to the Lagganlia Activity Centre just outside Aviemore, learn basic bike maintenance skills, CPR first aid qualifications, new mountain biking skills and earn our school £1,500 to help promote cycling in our school. The competition was open to all Scottish secondary schools – to win a place we had to come up with plan to show how we would promote cycling in Belmont if awarded the money.

Only nine schools were selected, thankfully Belmont was one of them.  Myself and three others traveled to the Activity centre in the October holidays to begin the training courses.  Back at Belmont we plan to open a bike maintenance workshop for school pupils and the community that live around Belmont. We also plan to get a couple of new bikes to join our current fleet, along with maintenance equipment to service the school community’s bikes

Day 1
Lagganlia is around 170 miles from my house, three hours in the car. I hadn’t been to the Scottish highlands for a long time and it was weird, the twisting roads after the A9 were perfect for road races, smooth and fast.  [Terrible, terrible idea Douglas! Ed] (We need a Burners’ trip there sometime in the future).   We arrived at 11:15 at Lagganlia activity centre and were shown our rooms.  We take part in a couple of “ice breaker” activities with the 9 other groups from schools around Scotland.  The games were a tight rope style trust and skills game where we were told to get everyone across the tight rope as quickly as we could.  We were rubbish so we moved onto the next activity.  We had to get in pairs and do a trust fall. Which was terrifying because i had only met the person ten seconds before.  We were then given an inner-tube and had to find a way to get all of our team through it in less than 10 seconds. It took us 4 attempts to get to under 10 and 3 further try’s to get to 8 seconds.  We decided to get into groups of two 5’s and one 3 where the three would stretch the inner tube while the 5’s would stand in the middle of them in a group. We would have the tube pulled over us and we would jump out.  And the same for the other five.  I cant even describe how the three who were stretching the tube managed.

We then did some mountain biking on the single track trails around the sight.  It was quickly clear who had not been to the Burner’s cycle school!

Dinner was served at 5pm followed on by presentation making for what our bids were in order to get the £1500. This was then followed by two hours of free time and lights out at 10:30pm.

Day 2
After the difficult task of waking up at 7:30, we met for breakfast at 8:15.  At 9 we were briefed on our day and did a cycle relay with baby bikes, cones and a limbo pole.  We had to cycle round the cones that zig-zagged up the course.  We then had to do a sprint back to the start, ducking underneath the limbo pole at the finish.

It was time to start working and refining our plans.  We had a class on budgeting, travel planning and time lining for our presentations for our projects.  By lunchtime the sun was out so we went about the grounds and took photos of the scenery.  We then went away on a mountain biking trek about the camp grounds. The paths were very difficult, thin and scary.  After showering it was time for dinner before evening activities with a man hunt style hunger games.  We then went to Aviemore to get some scran.

Day 3
The day was made up of three activities, after breakfast my group went on a mountain biking trek for an hour, learning skills like rocky hill ascents and descents, rear breaking downhill, nose wheelies, looking ahead to find the smoothest ground when mountain biking instead of looking at where the front tyre is etc. 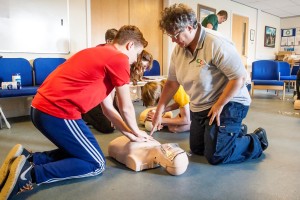 Afterwards we completed a 6 hour SQA first aid course where we learned emergency skills for people with conditions like epilepsy or asthma or if they were having a heart attack or stroke or if they had sustained a significant injury. We also learned how to do CPR on another person and how to wrap wounds in bandages. After dinner we spent time on our projects and then had free time

Day 4
On our last full day we completed a 6 hour bike maintenance course where we did basic bike mechanics like changing a tyre, adjusting brakes , adjusting wheel position, lubing chains, cleaning bikes and replacing brake pads. Then came the tyre changing challenge: we were put in groups with a bike each, we had to take off the tyres and change the innertube and place the wheels back on the bike. The team that did this fastest won.  We came in second (I blame the bike!)

We then finished off our day with a two hour mountain biking trek around the area, going through more thin paths and learning new skills like wheelies, bunny hops etc.

Day 5
Our last day, we finalised our presentations to show our projects and what we plan to do when we get back to the school. We presented to William from Cycling Scotland and the rest of the group. They seemed to like our idea more than they did when the week began: no bribes or deals took place, honest!

We left around 12pm, a bit later after the other schools. It was quite sad to see the others leave. We had made this friendship in 5 days and now we could only keep in touch over facebook. It was weird being picked up and seeing other human beings apart from the 40 odd people in total i had seen day in and day out for a week. I went the whole week completely cut off from the world, no wifi and no phone signal. I think i enjoyed the experience more because i wasnt thinking or worrying about things that were happening at home and with friends.

I sound like a grandpa but you don’t need technology to have fun (what has happened to me?!) 😂

Thanks to Douglas for his account of the Cycling Scotland School Camps – congratulations to Belmont Academy for securing a space and good luck delivering the plan.