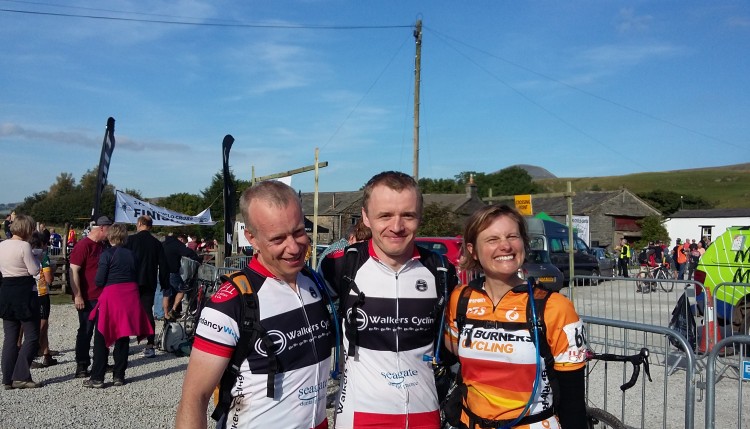 After months of preparation and nervous anticipation, The 3 Peaks CycloCross finally arrived for Jo Baxter on Sunday September 27th. This legendary event is now in its 53rd edition, and is steeped in Yorkshire folklore – Commonly regarded as the hardest CX race in the world with its 45% ascents, its technical descents, and the customary rough at best weather thrown in for good measure. Jo’s training involved countless climbs of Straiton Hill to mimic the steepness of the first “peak” at Ingleborough, not forgetting The Merrick and other local lumps of sizeable proportions.

Arriving on the Saturday, we were greeted with beautiful sunny conditions as we went for an evening scout to suss out the starting area and the first couple of miles of the course. If you haven’t cycles in the Dales, then do it. It’s awfy lovely.

Getting the bike right is essential for the 3 Peaks – Regulations state that there can be no flat bars, and no tyres over 35mm width. A survival bag and whistle are mandatory (gulp), and riders are expected to carry enough equipment to cater for any mechanical eventualities. Tyre choice and pressure is crucial to avoid punctures on the gnarly descents, light-weight is always preferable with all the bike carrying involved, and gearing must be small enough to get you up some of the climbs, but also big enough to get you moving along on the size-able tarmac sections within the race.

We opted for 33mm Challenge Grifo tyres at 60 psi, and a 1×10 gearing set-up (34 Retainer Chain-Ring to avoid chain shipping on bumby bits, with an 11-32 cassette). We also fitted bar top brake levers to relieve the soreness and stress that the shoulders and fore-arms would be forced to endure .

It’s worth noting that the 3 Peaks is all about experience – the help and advice that “broken-in” 3 Peaks riders like Vic Possee, Rod Henderson, and Russell Mowat gave Jo was absolutely 100% invaluable. Big thanks guys.

So, as the morning came and Jo set off with 650 other crossers, there was another race that was starting to unfold. A support crew is invaluable for this event. In fact, it’s essential. Just about every rider has family, friends, or team mates equipped with spare wheels or spare bikes ready for the call to action. So, as the riders left the start gate, hundreds of support crew cars, vans, motorbikes and MTB’s headed along the narrow country lanes to the first service point of the day. The impressive sight of dozens of vehicles embarking on 12 point turns (to ensure the correct direction of travel for the next service destination) was followed by back doors being flung open and hordes of people with bikes and wheels making their way like the clappers up to Cold Cotes just as the first riders were coming down. Luckily, our driver for the day was ex Rally Car driver (no joke) Catherine Logan, who was on support duties for her other half Russell (Walkers CC). Our third rider Kev Pugh (Walkers CC) had his better half Hannah on-board the service vehicle, equipped with that Yorkshire CycloCross essential, a six pack of pork pies. 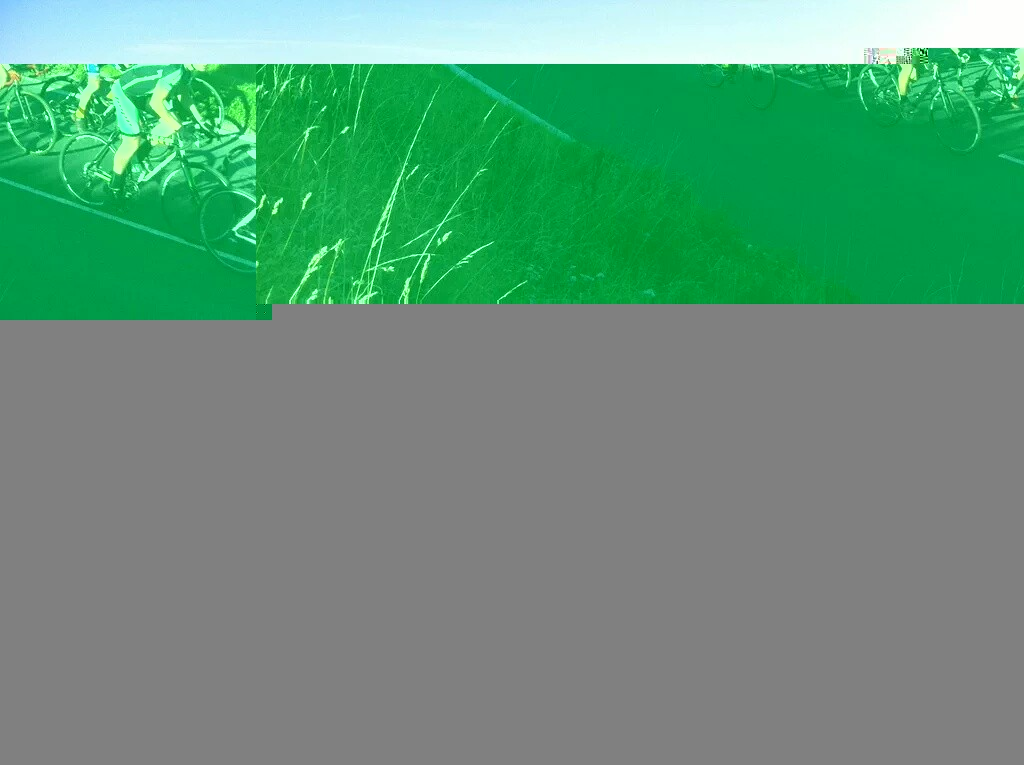 Hope factory racing pair Robb Jebb (11 times winner) and Paul Oldham were first to checkpoint number 1, with veteran MTB legend and previous winner Nick Craig not far too behind. The speed at which these guys descended, with rigid forks and damn hard tyres, was very, very impressive. Peak one (Ingleborough 723 metres) is horribly steep, and requires the bike to be shouldered all the way. It’s un-rideable, even for the elites….Our 3 (Russ, Jo, and Kev), all made it off the first peak in one piece with no mechanical or physical issues – Hats off. All good to go. 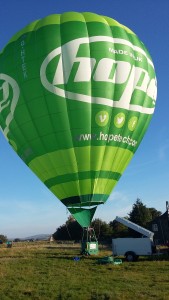 Next up was the climb of Whernside (735 metres) near Ribblehead, home of the famous picturesque viaduct, and scene of probably the most treacherous descent of the day. We arrived in time to see the well known face of Jason Barnes (Glasgow Nightingales) fly by on his Single Speed machine – Kudos to the big chap. Kev Pugh cycled past us in a trance like state (as he did at all 3 check points) seemingly fulled on nothing but an auld Wham bar and a flat can o Tizer. Impressive. Russ and Jo followed and stopped for a quick Camelbak change and a chomp on a jam butty. No punctures, broken chains, or rider/ground interactions. All good and everyone still on track physically.
According to Jo, Peak 3 was a psychological killer. Pen-y-Ghent is steep, very long, and the riders have the added bonus of being able to see the path rising up all the way to its 694 metre summit in front of them. Ouch. Plus, it’s a two way section, so riders are coming down as your going up. It’s a toughie.

Russ motoring on at Ribblehead after the Jam Butty re-fuel.

Waiting at the bottom, the joy, relief, and elation from every rider who made it off Pen-y-Ghent was very much in evidence, safe in the knowledge that there was only 2 ish miles on hallowed tarmac left to endure. Nothing could stop them now – We saw many punctured tyres, broken chains, skee-wiff handlebars and battered riders. But at this point in the day there would be no-one stopping. Finishing was the only option, even if it meant scooty biking your chainless bike for 2 miles. 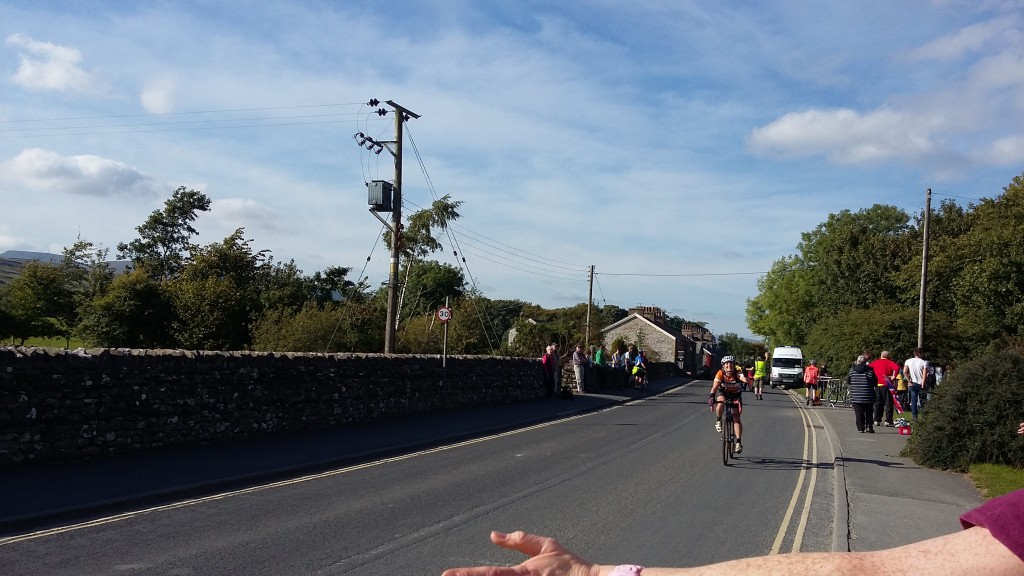 Our 3 all came through that final service point…Kev in a trance, Russ with a grimace, and Jo with a big smile…All that was left to do was to ride to the start-finish village, check in, indulge in some back slapping and hugging, and eventually grab a well earned Beer/tea/cake/pizza/beer/tea/beer combo.

Thanks to JohnPaul for the works and pictures – congratulations to Jo, Kevin and Russell