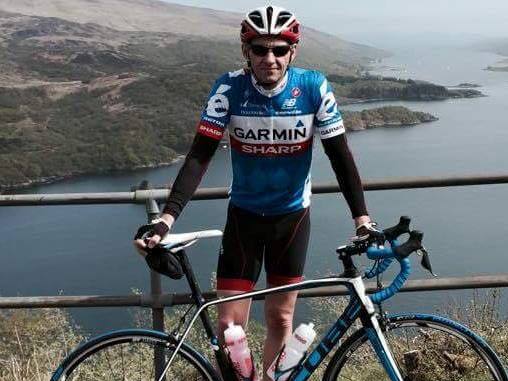 Next to enjoy the ‘meet a Burner’ treatment is Will Jackson.  Once you’ve heard Will’s incredible story you’ll understand immediately why we where so keen to find out more…

What do you do Will?

I work with Bibby Distribution, I mostly work in an office, but I used to be a long distance lorry driver – it wasn’t the healthiest lifestyle!  KFC, Burger King etc.  you name it…

How long have you been cycling?

3 year past in March

How did you start?

I had a kidney infection and ecoli-  so I ended up in solitary room.   I was attached to a IV drip.  One of the nurses told me I had an athlete’s heart – with a good slow resting pulse rate.  She said that if I gave up smoking I could be quite fit.

I’d smoked since I was 13, maybe up to 40 cigarettes a day.  My fiancée said that I always had a cigarette in my mouth.  Looking back it was probably true.

So I decided while I was in hospital, that was it!  I had to stop smoking.  So I dug out the MTB from the shed and starting riding round Irvine.  That was in March.  Then through my work I got a road bike in June with the Bike to Work Scheme, and it just went bananas. Saying that though,  if I did 25 miles or a ride like Irvine to Troon that was a big day – it seemed massive at the time.

Had you tried to stop smoking before?

No. Here’s how bad it was…  I had pneumonia when I was 30, and a collapsed lung.  As soon as I got out of hospital, first thing I did was get a packet of fags!

What were the benefits of stopping?

You hear people say cycling changed their lives – this is definitely true for me.  If you see how far I’ve come in the last 3years I can’t believe it.

However, financially…  You’d think I was saving, but  my fiancée says I’ve just replaced buying cigarettes with buying bikes!

You ride Sportives – can you name which ones you’ve done? 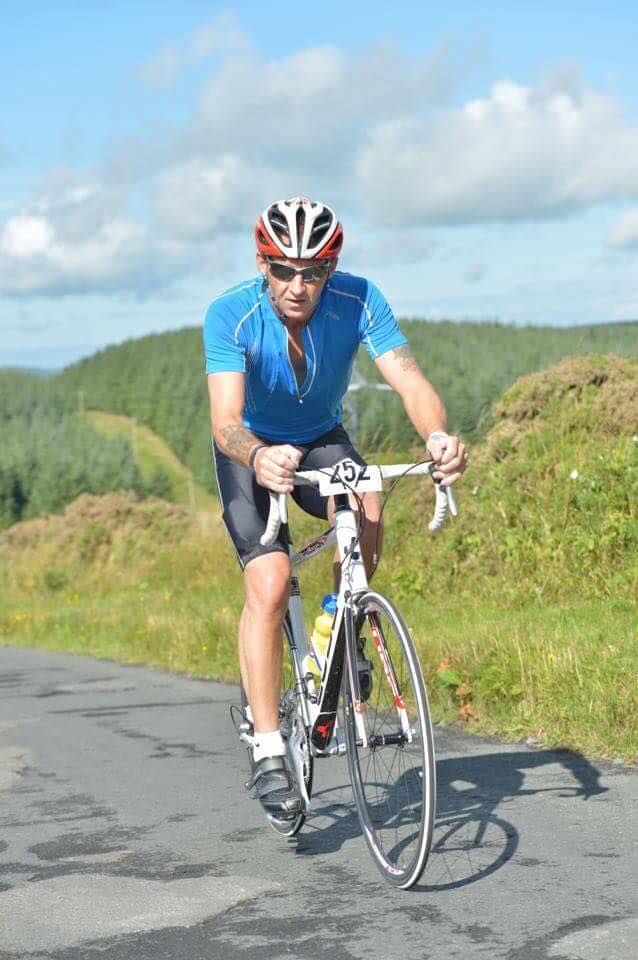 riding the 48mile Obree Sportive in 2013

The following year I did the Obree Sportive again and the 110mile Pedal for Scotland Sportive.  Up to that point the furthest I’d cycled was 48miles in the Obree ride.  From Crawfordjohn every mile was a bonus.  My time was 8hrs 2mins.  I was really pleased at the time.  Then last year I took over 2hrs off my time – I believe I was in the top 60.

What is your favourite Sportive? 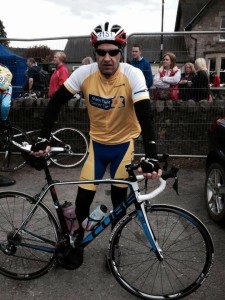 After the first Etape Caledonia

I like the Etape Caledonia – I’ve done it twice.  I was chuffed this year as I felt an improvement despite the weather being challenging.

Have you set any challenges?

I use Strava – that’s been one of the main things that has motivated me as well – when I see I’m getting into the top 10 I know I’m doing ok at my cycling.  I had a KOM on Moorfield to the Crematorium.  I also clocked 13th for going around Arran.

How often do you ride?

Depending on the weather, and also my work (I often do 6 night shifts a week), I try and do 100miles a week.

I don’t really have any other sporting interests.  When I first stopped smoking it was the year Wiggins won the Tour de France and that got me interested.  Then I watched the National Road Championships in in Glasgow.  Last years I saw the Tour in Yorkshire

What would be your dream ride?

I’d like to ride Alpe D’Huez.  I thought about going over to see the Tour in Belgium this year, but it’s not going to work out.

What kind of bike do you ride?

I’ve got the Cube Peleton that I got the June that I stopped smoking, I ‘ve also got a Cube Agree with electronic gears.

What would be your dream bike?

Probably the bike I’m on is doing more than fine!  I’m saving up for some new wheels and that will be me happy.  I’ve still got the MTB, but only really use if for taking the dog out.

Who would be your dream guest at a Burners’ Dinner?

David Millar I think.  He’s been there, done it , visited dark places and come back. He could have walked away.  I read his book when I stopped smoking and I wouldn’t say it inspired me, but It made me think you could change the way you were.

Do you ever crave a cigarette?

No – maybe the odd time it will come into my head, but I know I’ve come too far getting fit.

I ride because…  it makes me feel good.

Any advice for new or young cyclists?

Don’t be afraid to try it – I remember when I went to my first sportive I remember sitting in the car thinking ‘just drive home’ as I thought I’d make a fool of myself, but just go and let your legs do the talking.

Thanks Will for sharing!  And well done to the Nurse for recognising Will’s natural ability on a bike 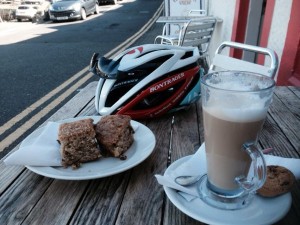 Apparently Will initially put weight on after stopping smoking.

I’ve always been built like a butchers pencil.  I put on weight when I stopped smoking, but lost ten kilos last year just through cycling an watching what I was eating!