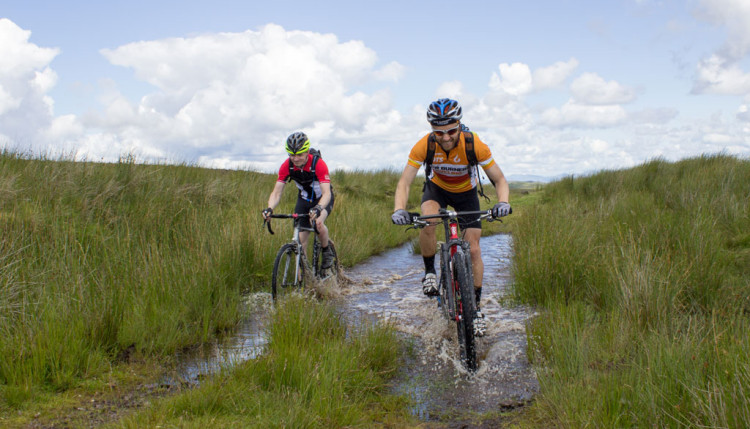 Four adventurous Burners (and a Walker) met in rare summer sunshine early on Saturday morning to tackle the latest of our ‘adventure cross’ rides on Duchal Moor.

After a quick chat in the railway station car park we headed for Lochwinnoch proper and National Cycle Route 7. While only seven or so miles of today’s ride would be off-tarmac, over 70% would be off road so we were free to chat and get to know each other as we coasted along the shores of Castle Semple Loch. 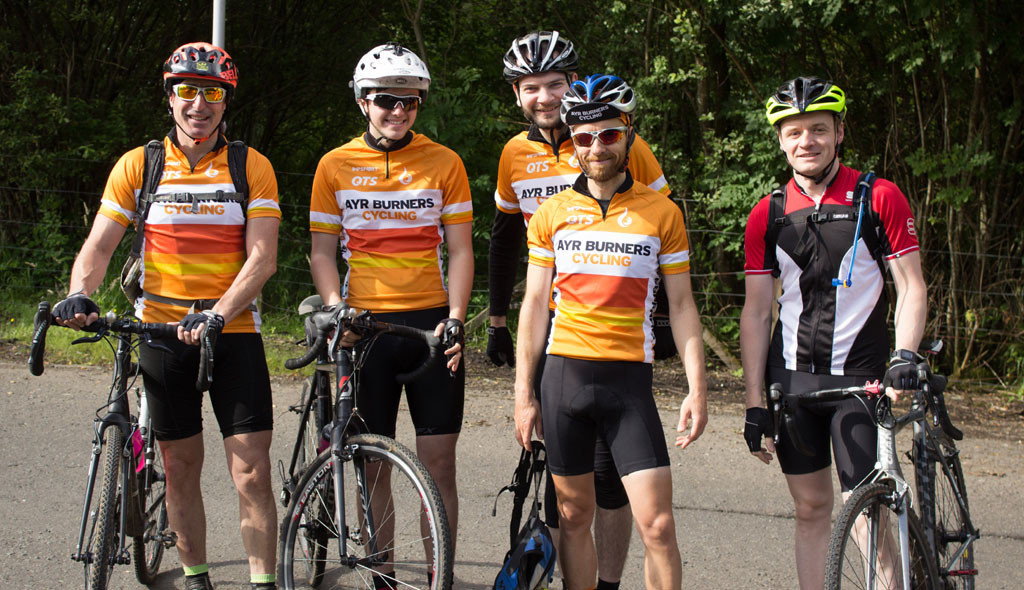 At Linwood we turned onto NCR75 to go up the hill to Quarrier’s Village. I usually feel the long, shallow gradient in my legs by Bridge of Weir but with the sun our backs and the banter flowing I didn’t notice where we were until the police pulled us over for a chat.

Anyone who’s been for a ride with me will know that I’m a not-so-closeted tour guide at heart, and that started in earnest when we made our way into Quarrier’s Village. Built as an orphanage 140 years ago it’s wide open spaces and grand villas are stunning but the most important building is Three Sisters Bake, my favourite cafe stop in all of cycling. Sadly it was a wee bit too early for a cafe stop on this ride, so you’ll just have to check their Instagram to see what you’re missing out on.

This was also our first taste of road riding of the day as we took the back lanes between farms and climbed towards Hardridge Farm, where the adventure really began. 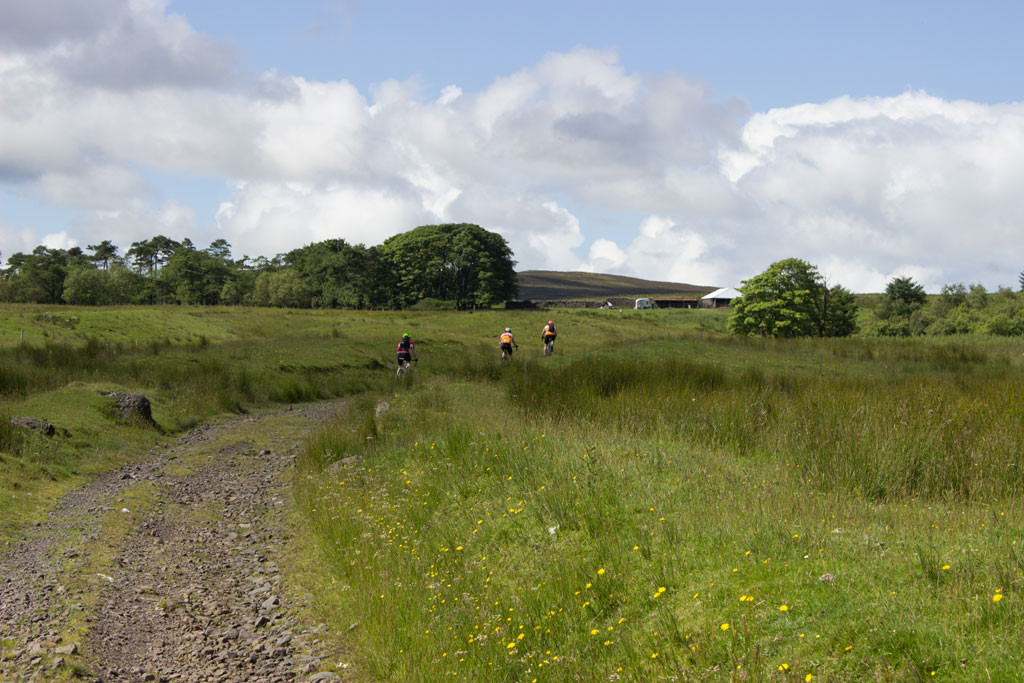 The final lead up to Hardridge is a good hint at what’s coming. The road surface looks like it’s been ploughed but it got the adrenaline pumping for the long climb ahead. Coming through the gate onto Duchal Moor one of the first things you see is an old red tin shed, which used to act as the main station on the Duchal Moor railway. The railway was built in the 1920s and carried shooting parties into the hills in search of grouse.

A rough track follows the railway for a mile or so up the hill, where we turn left and cross a ford on the Blacketty Water. Having done this route before I knew the best part to cross, but I’m not sure everyone was as keen to get their feet wet! 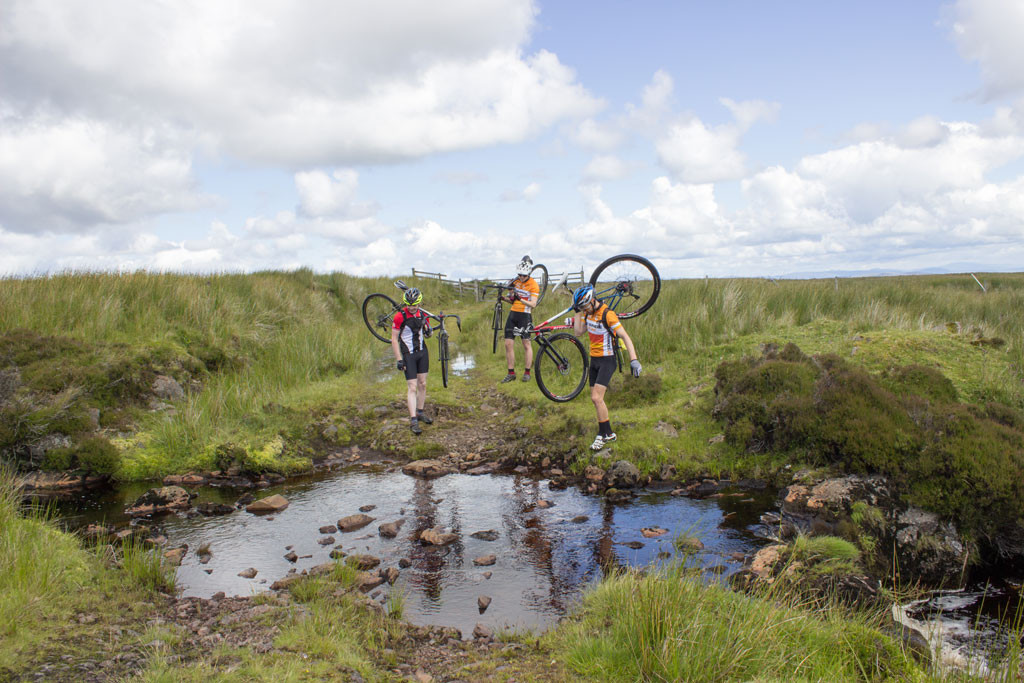 I’d been worried all week that the track would be so wet that it wouldn’t be much fun but we got lucky. There were lots of pools and the odd loch along the way, but the trail is in great condition underneath and we could ride most of the route.

Not long after we started on the cross moor route we ran into a herd of Highland Cattle which just didn’t fancy moving, so Rod went and had a friendly word with one of them only to discover it was a rather large bull when it jumped up! After a fairly brisk sprint past them we settled back into a nice rhythm.

I always like to use photography as an excuse to cover up my slowness going uphill but speed doesn’t matter on these trips, it’s all about the adventure. 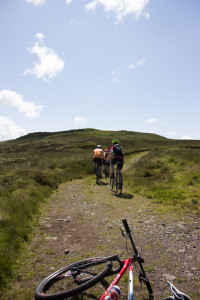 We had regular stops on the way to the highest point of the moor so that we could take in the views over Glasgow to the east and as far as the Arrochar Alps to the north. From the top of the moor the track descends fairly quickly down to the Calder Water, where I was shocked to see another human being for the first time in miles.

The descent was great for me, which was unexpected. Back in April I’d done this route and was fairly terrified on the descent as it felt steep and loose on a cyclocross bike. This time I felt a wee bit silly that I’d warned the others as it felt so easy. It’s amazing what getting a few rides under your belt will do for confidence.

When we reached the Calder Water the guys who’d fallen took a dip to clean up and cool off while I took photos. It always pays to have the camera!

My arms were pretty chuffed when we hit the smoother track that leads uphill (again) to the Muirshiel Mine on Queenside Muir. We took the ‘adventure’ a step further when we reached the mine, going for a wander up the hillside along the fences that warned of death in mineshafts if they were crossed. For all it was a lovely sunny day when we were there it must have been a bleak existence for the 48 souls who dug for Barytes here with no electricity.

After a nosy in the emergency shelter it was time for the downhill, all 2.4km of it! The descent was fast but safe and I really enjoyed being able to pedal rather than standing in the attack position, which was starting to hurt a wee bit.

Our cafe stop was at the Muirshiel Visitor Centre, with lovely views across the Calder Water to Misty Law from the garden. Once we’d all filled our bellies it was time to put them to use as we flew down the glen on fresh tarmac towards Lochwinnoch where we went our separate ways.

While Duchal Moor was one of the easier adventure cross rides I’m really pleased with how my technical skills have improved this year and I’d encourage anyone with a bike suitable for offroad and a little fitness to give it a go. You won’t meet a friendlier, more relaxed bunch to explore our beautiful country with!