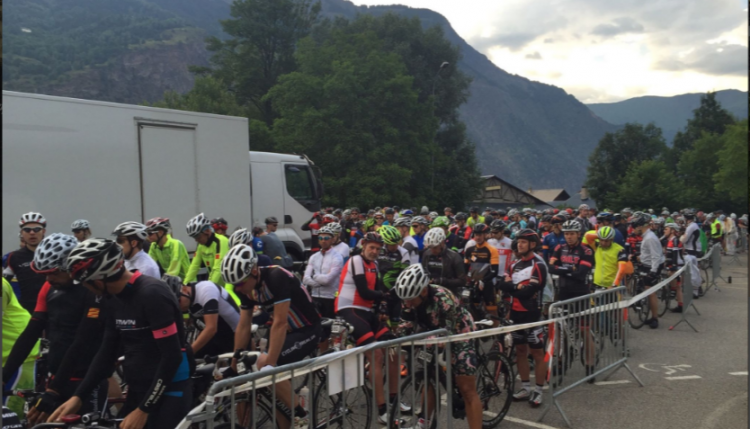 Martin Carmichael has recently went for a bike ride….Not just any bike ride though. Martin completed the Marmotte Ciclo Sportive – A fearsome route with a splattering of epic mountains made famous by the Tour de France. Martin onviously used the Marmotte as training for the Ayrshire Alps Sportive in August, hence we wanted the lowdown on the event (and some pics) – A grilling was in order –

Martin. Firstly, well done on your achievement. How are the legs ?

Thanks. Well pleased completed in one piece and ahead of the dreaded broom waggon! Legs were a bit tight but not as bad as I had expected. Even managed a wee tootle out the following morning to watch proper cyclists time trial up Alp Dhuez.

Tell us about your preparation for the event, the training, and the all important gearing choice !

My preparation had gone well with numerous trips up to the masts on Carrick and a trip down to the Peak District 3 weeks before to take part in the 100mile 4000 metre Peak Epic Sportive – Or so I thought until I tried a practice run on the Friday up Alp Dhuez! In 30 degrees plus heat and gradients which seemed well above the published average of 8.1%. I had a compact 34-32 and found the 32 very welcoming and necessary in places. Rather bizarrely however, I often found myself going up a few gears and even going into the big ring for a “rest” – grinding it out became more preferable to spinning! The one big mistake I made though and one I would caution others against was that I hired a bike rather than take my own. Bike was great. A Trek with Ultegra groupset and Fulcrum wheels – but it wasn’t mine! The longer and harder the day became the more I hated the bike – it was too big, the seat position was wrong, the steering wasn’t reactive enough etc etc. Definitely take your own bike!

How big a part did the weather play on the day ? Was fuelling and hydrating an issue ? Did you have a time goal or a strategy?

We had every season in one day! I stripped off at the top of Telegraph (evidence below) due to the heat and then managed to melt snow on Galibier during a comfort break! We had a headwind and driving rain in places which felt like a good old Scottish bike ride! I found the altitude difficult which I think contributed to me being sick at the top of Galibier. I didn’t hang about though and an amazing descent through the clouds soon brought me back to my senses! We were well briefed beforehand on the need to drink. And I did! Plenty of food and drink stops and simply a case of conditioning yourself to stop and take everything on offer on board. My original goal was 9 hours but I quickly realised that resetting to simply finishing within the cut-off was a far more realistic one. It was a joy to be cycling in a pelotons of 200 plus cyclists and watching Sound of Music scenes pass you by. 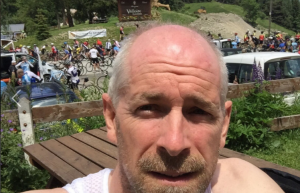 The route is a who’s who of iconic climbs – What was the toughest one ? Which one did you “enjoy” the most ?

They were all tough in different ways. Glandon was fun given the number of cyclists and the craic was good. The descent on closed roads was just amazing with every type of bend imaginable. At Telegraph and Galibier the no of cyclists had thinned somewhat. Both were tough with the ride up Galibier particularly relentless but I can’t say I particularly enjoyed either – bar the going over the top bit! Alp D’Huez though, was for me the toughest and the most enjoyable. I had done it the day before as a practice but doing it with 100 plus miles in your legs was something else. I’d love to say I powered my way up! In reality it was more a long, slow slog! Perversely enjoyable and the buzz you get from the locals shouting you on as you enter the village was amazing. Alp D’Huez has to be on every cyclists bucket list.

Would you do it again ? What’s next on the list ?

Definitely recommend to anyone looking for a challenge but cannot stress enough the need to get the training in. I thought I had done enough but with hindsight – hills, hills and more hills! Next on the list – the Ayrshire Alps Friendly Sportive on the 28th August of course!! Then I have set my sights (but not yet sent the entry money!) on Mont Blanc Sportive at 330km and 25000 feet it is supposedly the hardest one day sportive in the world – any other Burners fancy it?