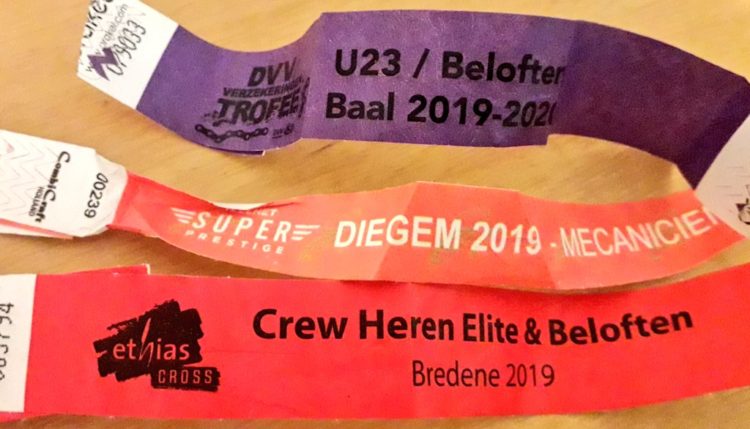 We’re in what I assume is a suburb of Brussels, just inside the ring road, but probably once a town in its own right.   The sun has long gone down, and my heart rate is going the same way after a panicked escape from the throngs of spectators on the far side of the course.   With an orange bracelet on my arm I’m standing inside the course barriers to look after my rider.   I’m here to collect his orange ‘Ayr Burners’ long sleeve training top (available from all good IMPSport dealers).  Several riders along is the recognisable figure of the World Champion, with someone ready to collect his long sleeve rainbow-coloured training top.    This is the Super Prestige.

Since our engagement, I’ve spent alternating Christmas or New Years with my wife Marie’s family in Belgium.  Visiting the cyclocross has become a ritual part of my holiday carnival.   Boxing day in Zolder, New Year in Baal, cold rain in Namur, frosty fog in Loenhout.   From the first time I saw Sven Nys battle it out with Niels Albert and Zdenik Stybar in Baal I’ve been hooked.   No other part of cycle sport gives you this level of access.    Local residents open up their driveways to accommodate the campers and trucks of the professionals.   Sanne Cant and Mathieu Van der Poel ride through the same entrance as 10,000+ paying fans.   And incredibly, the organisers of the DVV Trofee and Super Prestige series open their arms to welcome the finest riders of Ayr Burners Cycling…

I’m here with Harry McGarvie, just turned 18, and in Belgium for a week to sample professional cyclocross.   He’s seen it all before of course, when the pros visited Milton Keynes to trash the National Trophy course the day before he was due to race it.   He has grown a bit since then, his 26” wheel Frog bike has been replaced by one of Cameron Mason’s season-old Giants, and with an under 23 licence he gets to start with the grown-ups.

His first race is in Diegem, where the official crowd number is placed around 20,000 spectators.   He has signed on ‘in the little castle’ along with Carmen Alvarado.   His dad Lindsay is down in the pits, sharing the barriers with Corne Van Kessel’s support squad.  “No problem, you help look out for our rider, we help look out for yours”.

As the gridding gets underway Harry appears relaxed, in particular contrast to me.   I’m experiencing cyclocross-fan-boy overload with my access-all-areas orange mechanic’s pass.   Look, there is Sweek, and Sweek again, and hooray, it’s Cammie Mason!   Fortunately his name is eventually called and Harry moves onto the start grid, in last position.   Tights, gloves, and extra layers are thrown into the air and the lights turn green.   Harry has launched!

I sprint down to the pits where Lindsay and I have a great view of a tricky off-camber section, and a massive wide-screen television showing the progress of the leaders.   On the first passage the riders fly through in one long line.  Harry is in there, about 10 from the end.    A lap later we set the stop watch on Van der Poel.  2mins 35.   Given Harry’s awful gridding it’s not a bad start.   A lap on and he flies through again, no need for service.   Next lap a few gaps have appeared, but Harry is racing with his head – making up ground on the off-camber by running while other riders stay mounted but move slowly.   The clock is ticking back from VdP though, so I scurry on up to meet Harry by the finish (riders are generally pulled from the course once outside 80% of the leader’s time).   Harry just makes it through for another lap before the commissaires start signalling back markers over.   The world champ charges up the steps, and just a few seconds later here comes Harry.   What a picture that would have been.

As other riders lie on the ground wheezing and coughing, Harry greets me with a mix of exhaustion and exhileration.   That just happened.  Wow.   We get his impsport layers back on, and I force a waffle and some water on him.   Back at the car Lindsay is as proud as you would expect – his son has just ridden 40 minutes against the best in the world.

Diegem is an exceptional race as it is run under darkness.  Which is really cool, until you figure out that the next day’s Ethias Cross at Bredene is run in daylight and needs an early start for the trip north to Ostend.   Although technically a smaller event, most of the big names are represented again.   Wout van Aert’s name is scratched off the start sheet.   I don’t have time to cry though as we need to get Harry to SIT DOWN and let us prepare the bikes!

Today we have red bracelets to get backstage.  The course is a lot softer, with the sort of super-slippy off-camber technical sections that give me the heebie jeebies.  We see the Trinity racing duo of Pidcock and Mason hovering over them.   Harry likes the course which is a great sign.   He makes me practice bike handovers, which is just as well as soon after we are doing them in race conditions.

Harry has one spare bike, and the queue to the Karcher jet-wash stand is kind of long.  Despite having brought five bikes along with him, VdP still has his team (not Andri, I checked), in the bike wash queue before me.   And in the most ‘pinch-me-is-this-really-happening?’ moment yet, I’ve found Harry’s bike leaning against the opposite side of Mathieu’s as the mechanic and I jet blast each other.   The temptation to get a selfie was almost overwhelming.

Thirty-four minutes later and Harry is out.   Given the shorter lap duration and his overall placing, his performance is at least on par with Diegem.   Held up at the end of the start straight by an awkward tangle of riders, Harry lost some precious time that might have kept him in for longer.

Next day is a rest.   I guess the smart thing to do would be a light roller session or something.   However, Lindsay and I have got it into our heads that a couple hours on the pan-flat roads to Roubaix is just about the same thing.   Situated immediately across the border from my mother-in-law’s home in Tournai, I know the area well including short-cuts if we need them.  The plan is to ride to L’Arbre and then on to the Velodrome.  But there is no point in experiencing five star pave if you don’t have any three-star to compare it to, so I sneak in the second part of Bourghelles-Wannehain which adds a few km.  It is a cold day, having started with frost.  Despite his very light weight Harry makes short work of sector one, and again on sector two at Camphin-en-Pévèle.  We take some tourist snaps at L’Arbre, but when Lindsay and I have to wait at the exit of Hem we should realise something is up.  Harry needs a gel.   We ride on, Lindsay getting giddier as we approach the fabled velodrome.   Some more pictures, and then our star athlete goes ‘bonk’.

The first café we find isn’t quite the equivalent of the Trainspotting toilet scene, but it could certainly be described as ‘authentic’.   After an insufferable wait behind a man getting his lotto scratch cards, Harry finally has a mountain of chocolate Kinder and fizzy juice to get his power back up.  Gently we ride home and send Harry off to recharge.

New year in Belgium runs its usual course for me.  I go to bed early on a full stomach, got woken by the deafening volley of fireworks at midnight, and then drive north-east to Baal.   One significant difference is I now get in for FREE thanks to the purple wrist band I get via Harry.   The Under 23’s have their own race here, so the start time is earlier again.

The site has been significantly redeveloped since my last visit.  The rustic and creaky swiss-style café has been replaced by the sleek concrete ‘Sven Nys Centre’ and there are some new hardcore paths where previously the mud was ready to cover the tops of my wellies.   Also gone is the scary wooded descent where I saw Lars Boom crash in practice, ending his day out and the rest of his cyclocross season.   My insider knowledge is now useless to Harry.

I catch the end of the junior men’s race.   Coran Carrick-Anderson is riding brilliantly. He doesn’t have the local knowledge of Thibaut Nys, but he makes easy work of the most technical features.

Harry arrives at the start chute looking relaxed.   We have spare wheels and bike in the pits where Lindsay will be busy.   As I have my six-year-old son Robin in tow today my main task is to carry Harry’s spare clothes and get a nice picture of him as he passes the giant inflatable Beko washing machine.

The race starts fine, but oddly Harry passes me at the very back of the line.   He has a slow puncture that has made itself known in the opening sprint.   Having limped on to the pits he next passes me on his blue bike – still in last place but looking much sharper than the riders in front on the steep wooded switch backs.    I’m primed by the Beko inflatable for his next passing.   The clock ticks by.  The Belgian champ comes through again.   I head to the finish but he hasn’t passed.  I head to the pits but both he and Lindsay are absent.   I find Harry at the car, looking glum.    Having chased back through the pack and made up a few places his legs blew.   A bit like Tom Boonen’s might have the day after chasing his dad across the cobbles of northern France.

I understand Harry’s disappointment – he is an elite athlete that wants the best.  His equipment and preparation let him down, but his skills and strength have been evident all week.   Personally, I’m elated.   Ten years ago, when I first came to experience the Belgian cross scene, I never imagined returning with a rider I know, wearing the colours of the group I founded.    For me it’s a triumph, and I believe it is for Harry too.   Having survived 40 minutes against Van der Poel, and experienced some wicked features of international cross, he knows he is on the right track.   It has been an absolute privilege to share these moments with a young athlete.  However far he goes from here, he should be immensely proud.   I know I am.

We’ve all learned a lot, and I plan on using that knowledge next year.   I’ll shortly be setting up a crowd funder on behalf of the Burners to send two promising under 23 riders out to Belgium for a week next season.   And most importantly, we’ll need to prepare rider cards for the cyclocross superfans like Harry’s fan ‘Harry’!