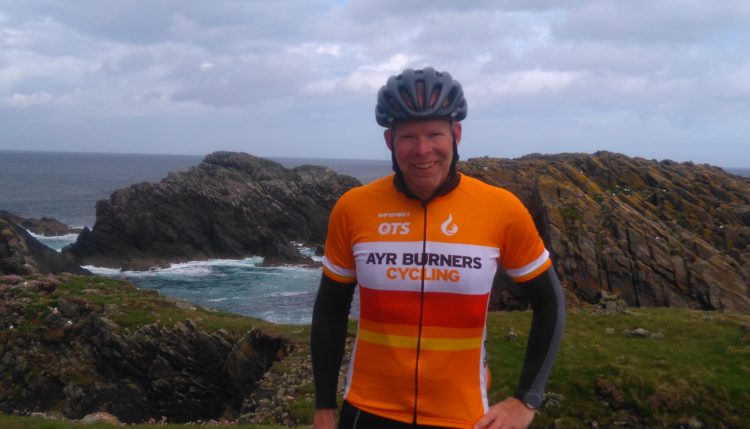 With thanks to Donald Laurie for the following tour report:

Following on from the exploits of Matt Wing and Jon Mahoney, and then Janice McGeechan, I was the latest Burner to tackle the Hebridean Way, which runs from Vatersay in the south to the Butt of Lewis in the north.  Given this appears to be the Year of the Donald, it was appropriate that my travelling companion was Donald Smith (of Paisley Velo).  I’ve known Donald for years and have done other trips with him, so I knew we’d be fine living out of each other’s pockets for 5 full days.  It also meant we got some weird looks every time we appeared at accommodation and asked for “a room for two for Smith”.

Like the majority of people that do this route, we chose to go South – North to take advantage of the prevailing winds, which meant getting to Barra for the start.  That’s normally a wise choice ….

Getting there from Ayr involves a 12 hour journey – next to none of it by bike.  An early train to Glasgow is followed by another to Oban (which is well worth doing for the views).   After that, a 5 hour crossing to Castlebay awaits.  There’s plenty to see, at least in the first part of the voyage, as the boat passes Ardnamurchan, Mull and there are views over to Rum and Skye.  Luckily, when the land disappears there are plenty of comfy reclining chairs – and a bar !!! 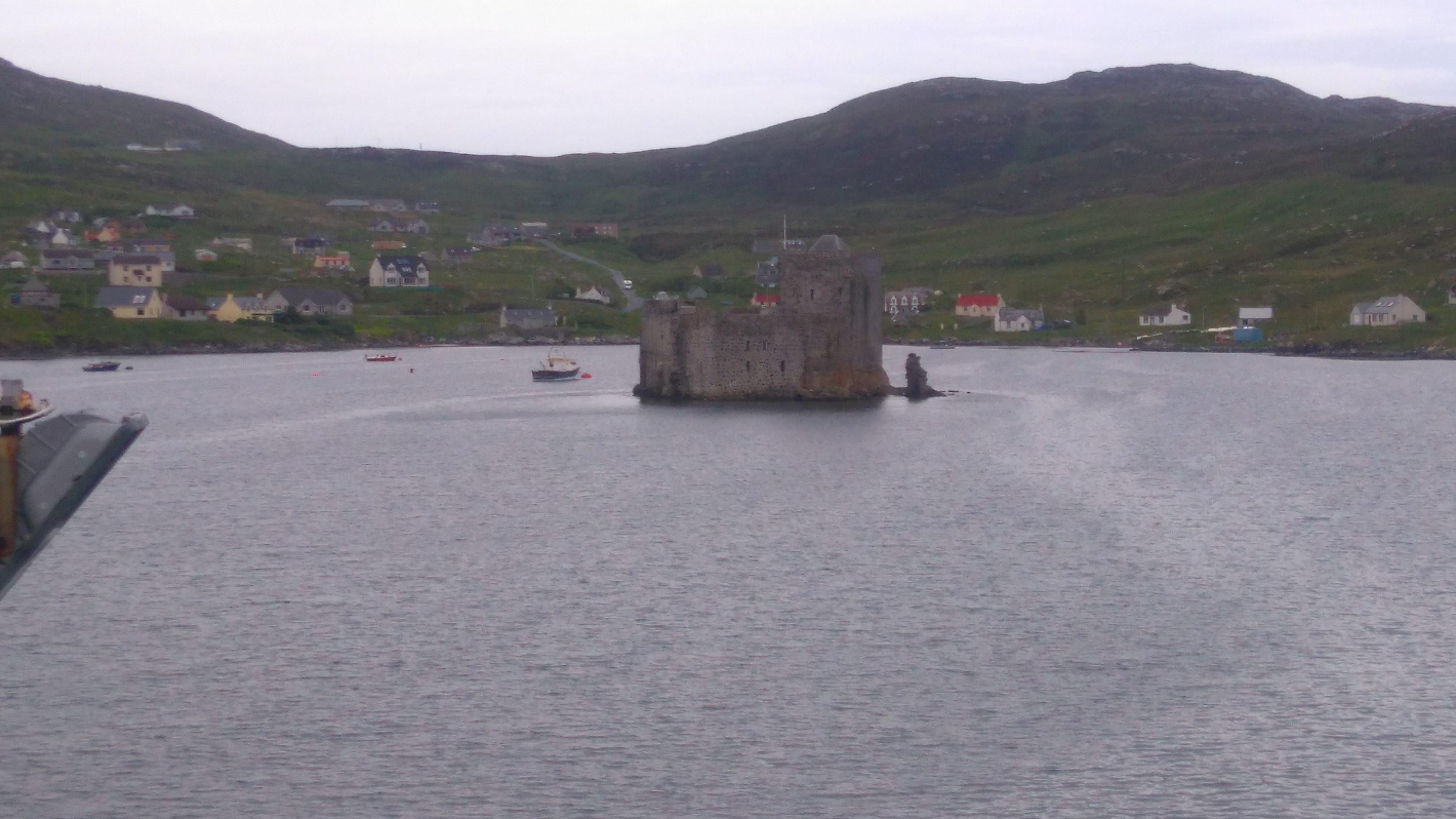 Our first nights’ accommodation was at the Dunard Hostel, a couple of hundred yards from the ferry terminal at Castlebay.  We dumped our stuff and got on our bikes to head for the official start of the route at Vatersay.  It‘s only 6.5 miles away but that would save us 13 miles the next morning (and far more importantly 45 extra minutes in bed).

We very quickly learned Hard Fact No 1 as we took the left turn at the Vatersay sign-post – the route isn’t flat.  A 12.5% hill wasn’t what we were looking for so early in the ride, but at least the run down the other side was fun.  Once over the causeway to Vatersay it wasn’t long before we saw the first of dozens of fantastic beaches and, after a quick photo stop, we were at the start in the township of Vatersay.  By now it was starting to drizzle, so a quick turnaround saw us back over the hill, which actually seemed worse from the south, and back into town for a healthy meal and some fruit juice (or was it fish’n’chips and a couple of beers ?). 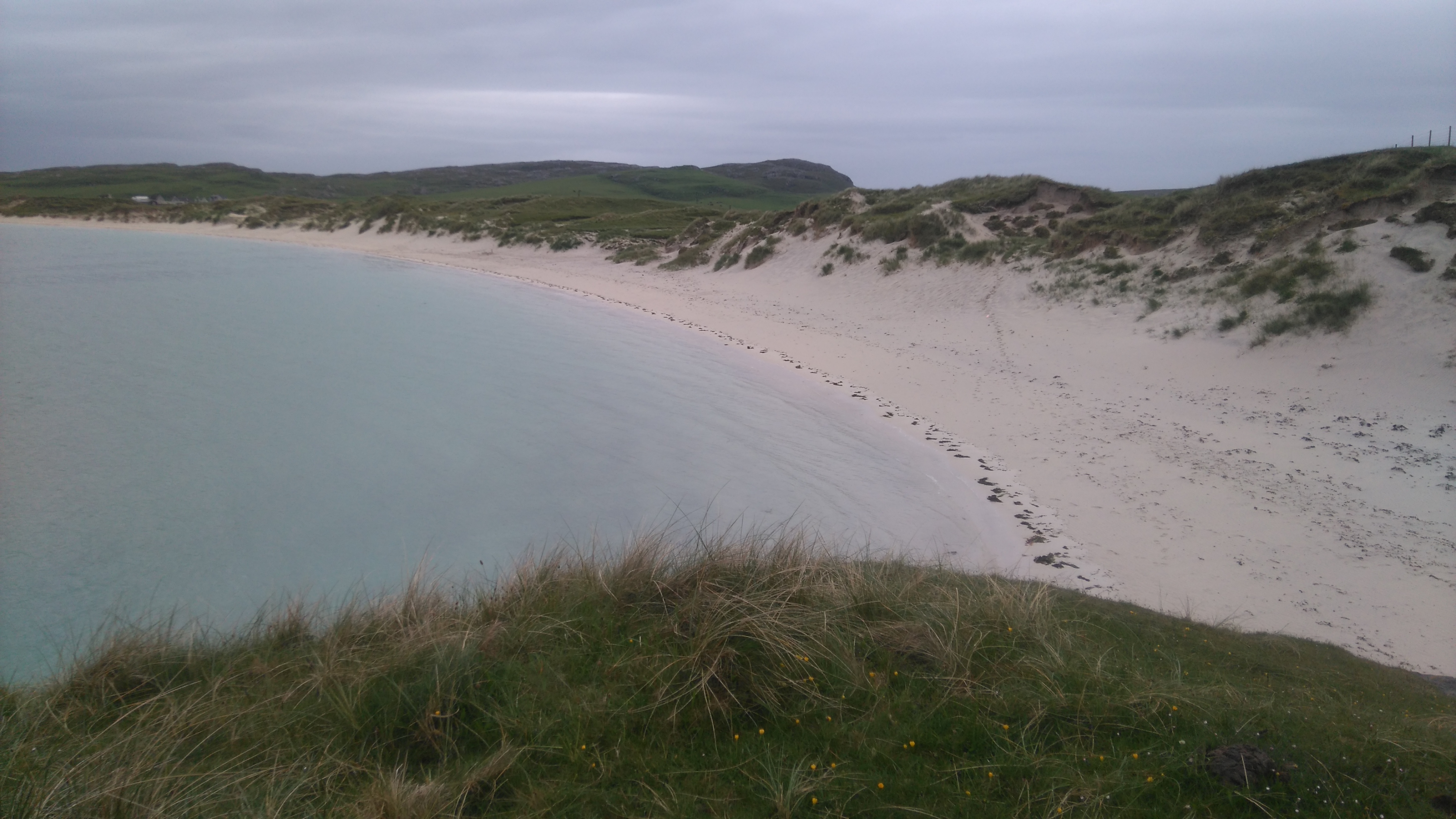 The start of Day 2 presented Hard Fact No 2.  Just because the ‘prevailing’ wind is from the south doesn’t mean it’s always from the south – and today it was from the north.  Despite the headwind it was a glorious hot and sunny day and we were soon on the boat to Eriskay.  The ferry terminal there is beside another huge long sandy beach – you soon become quite blasé about the number of stunning beaches.  After a detour to the Am Politician pub of Whisky Galore fame (disappointing because (a) it was down a big hill we had to climb back up, (b) looked like it was someone’s house and had been built 5 years ago, and (c) it was closed) we were over the next causeway to South Uist.

We soon felt much closer to home when we saw signs for East Kilbride !!!  We pressed on to West Kilbride before stopping for a second breakfast at the café by the campsite.  After that, we decided against the planned Ayr Burners v Paisley Velo match at Askernish Golf Club as the course we’d pass on Harris the next day is even more scenic.  The Heb Way route doesn’t follow the direct road up through South Uist but takes occasional detours off to the west coast (spectacular beaches, machair, Atlantic Ocean, small townships, next stop Canada, etc, etc) and this part was very enjoyable.

Lunch-time saw us reach Benbecula which is very flat and doesn’t take long to cover, before causeways took us to Grimsay then North Uist.  As we drew closer and closer to Berneray we started to see other cyclists in the distance, so we put a little bit of extra effort into catching them.  I’m ashamed to say that this wasn’t out of any desire to be friendly and have a chat, but simply that the Gatliff Trust Hostel on Berneray where we were staying can’t be booked, so it was likely that the others were competition for a bed for the night.  In the end, there was actually enough space for everyone so we didn’t actually disadvantage anyone.  The hostel itself is in a stunning location, and is well worth a visit in its own right.  After 90 miles, a stroll along the white sands after a nice steak was a very relaxing end to the day.  Getting cramp at 2am on the top bunk in a room full of strangers wasn’t so much fun, but it passed quickly.

While Day 2 was glorious, we woke on Day 3 to torrential rain and a strong easterly wind.  Once off the Berneray – Leverburgh ferry the east wind helped for a time until the road turned north-east.  It was then that we reached the Isle of Harris Golf Club but it was so wet we had no desire to stop for a round of golf as planned (although we saw a mad foursome on one of the greens as we passed).  Next, as it was so wet / windy / misty, we couldn’t see anything at Luskentyre so had no appetite for a photo stop.  As if that wasn’t bad enough, Hard Fact No 3 became evident – the roads are not all smooth as a snooker table.  On the climb over to Tarbert after Luskentyre the combination of the gradient, wind, rain and road surface made it a tough 8 miles or so.

We knew the forecast was for the wind to change to a southerly at lunchtime, so when we got to the First Fruits tearoom in Tarbert at 10am we decided to stay there until noon before moving on.  The staff were incredibly friendly and didn’t seem bothered that we commandeered a corner of the tearoom and proceeded to drip all over their floor.  Although we set back off in the rain, the wind was behind us and, after the climb over Clisham, the rain stopped, the sun came out and all was fantastic again.  Before we knew it we’d reached our B&B in Callanish (Creagan – very highly recommended) where the owner met us with steaming coffee and a big plate of banana bread and chocolate biscuits.  I’m still not sure if she expected us to eat it all …..   We then wandered round to the Visitor Centre at the Standing Stones to take some photos and have tea – the lentil soup was particularly good.

The good weather (and southerly wind) continued on Day 4 and after a swift 35 miles we were at the Butt of Lewis in no time.  It’s a spectacular place (be careful if you don’t like heights) and, as a bonus, the Decca café about half a mile from the Butt is open on a Sunday – much to our surprise / relief.  We were a bit nervous about the remaining 29 miles back to Stornoway into the wind, but it turned out to be easier than we expected (if you expect the worse, it probably won’t be that bad !!!).  Barvas Moor seems to go on and on (and up and up) for ever, but the drop down into Stornoway was excellent – as was the Heb Hostel where we stayed.  After a quick shower and clothes change, we went for a curry and a couple of beers to round off the trip – who said there’s nothing open in Stornoway on a Sunday night ?

The final morning meant a 7am sailing from Stornoway to Ullapool (which we nearly missed despite being 20 minutes early) then 32 miles to ride over to Garve.  By now the wind was pushing us along and, apart from a hill that slowed us to the point where the midges could feed on us, we were cruising at 20mph without trying.  At Garve the road narrows and gets twistier so, as it’s a busy road with lots of fast traffic, it seemed a good idea to get the train to Inverness and then (after a 5 minute turnover) further trains to Glasgow, then Ayr.

We’d planned (well ok, when I say we I mean the other Donald) the itinerary to make sure we had plenty of time to stop and see things along the way, as well as ensuring that we had plenty of food as and when required.  I suppose that would be Hard Fact No 4 – there aren’t shops every couple of miles, so you need to make sure you’ve got enough to keep you going.

We met loads of great folk along the way, saw some amazing sights, stayed in some lovely places, ate some great food, had a great laugh.  Oh, and rode our bikes a bit, too.  I’d thoroughly recommend it – just make sure you plan it out first (or go with someone who has !!!!).