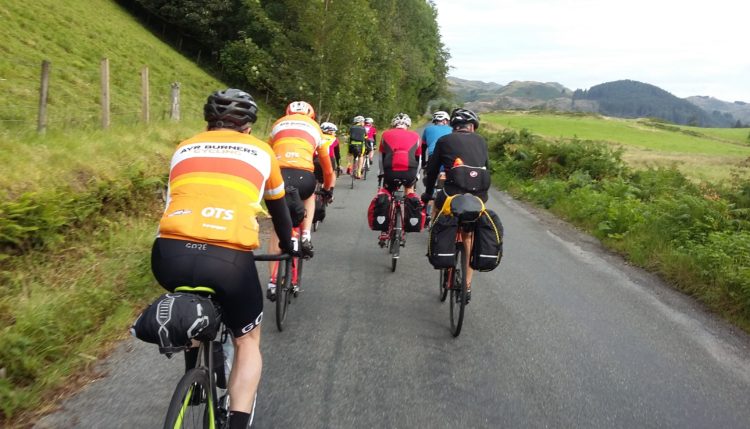 A stormy start to the 2019 Ayr Burners Tour saw the scheduled Thursday evening depart from Ardrossan to Campbeltown postponed by 12 hours due to choppy seas around the Cape of Whiting Bay.

2 hardy riders made it (just) to Campbeltown by way of an earlier sailing – Adrian and Jim had a four day pass and by God they were going to use it.

An early start (0715) saw the group comfortably catch the 0940 Ardrossan to Brodick sailing, with the fastest sprint of the morning being the cafeteria queue dash, with the prize of an 8 item CalMac breakfast on offer. Despite everyone agreeing that the 1320 sailing from Lochranza to Claonaig was the sensible (leisurely) option, the 1200 sailing presented itself as a surpriser bonus option (tailwind up the Boguille) and so, ahead of schedule, Claonaig beckoned withTarbert penciled in for lunch (lots of).

With perfect timing Adrian and Jim arrived from deepest Campbeltown with tales of ravaging storms, pints of lager, and macaroni cheese.

The splendid roads, scenery, and pleasant weather continued as we headed North along the West side of Loch Awe, passing through Kilmaha, Dalavich, and Kilchrenan before taking lunch in Taynuilt. Unfortunately, a rear spoke had chosen to dislodge itself from John Duncan’s rear wheel, so there followed a series of intricate wheel solution scenarios involving bike shops, Oban, Scotrail, over officious train employees, Twitter rants, taxis, and buses (in no particular order)

Mid afternoon sustenance was taken by the remainder of the bunch at the excellent Creagan Inn, whilst John continued his wheel quest somewhere in the signal free ether of the Oban area. It would take more than a wonky wheel to keep JD off the saddle, and low and behold a chance rendezvous saw the man himself, along with Shimano’s finest 70 quid rear wheel, reacquainted with the group in a bus stop en route to Fort William – Thank the Lord for unofficious bus drivers.

The sun was splitting the trees as we headed out from Fort Bill. A quick visit to pay our respects at the Commando Mermorial en route to Laggan, Loch Oich, and Fort Augustus via the wonderful NCN78. Light snacks(ish) were called upon at FA due to the impending ‘brute of climb’ up to Loch Tarff. Temperatures in the mid 20’s could only mean one thing – ice-cream. So Foyers and it’s famous falls of aluminium production provided the gelato requirements. The final stretch along the lovely banks of Loch Ness proved a fitting finale before the chequered flag was dropped in Inverness.

Big thanks to John Duncan for his exemplary tour organizing skills, and to Scott for his bike and rider minibus / trailer transfer system. Here’s to 2020.