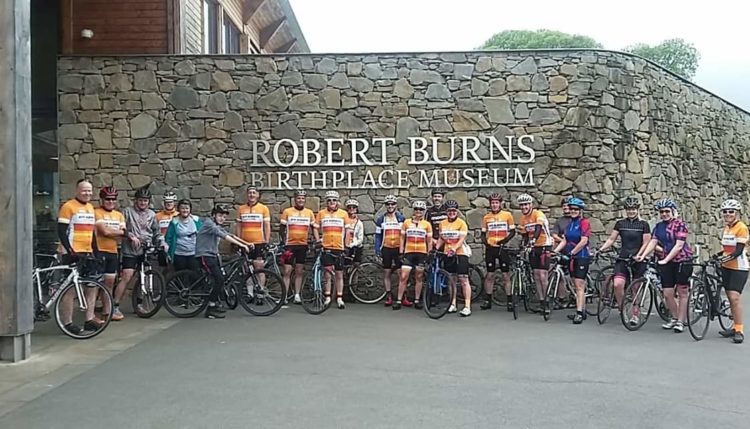 At the Burns Museum at 9.30 this morning, a large number of Burners and guests gathered for the eagerly anticipated Bikes At Burns event. As well as an even larger than usual turnout for the social ride, we had 10 riders for a Burns-themed ride, led by our own Burns expert, Bill McCrae.

This took our little group, of all ages and types of bikes, along the cycle path past Mungo’s Well and Greenan Castle, all the way along the sea front into
town. We stopped at the Auld Brig, the cemetery behind M&S (did you even
know it was there ?), followed by the Tam O’Shanter Inn (no drink was consumed !!!), the Auld Kirk and then the Brig o’ Doon. At each, Bill gave us some entertaining and informative detail on all things Burns and Ayr related.

From there, it was back to the Burns Museum, barely 5 minutes before the social ride group returned – just enough to beat them in the queue for coffee and cakes though ….

However, that’s not all that was happening at the Burns Museum today. Once the coffee was complete, we wandered out to the front of the building, where the Clan stunt team were just starting their first show of the day. Some of the things they were doing defied both gravity and belief – their skill and bravery levels are off the scale …..

The guys from Adventure Carrick were also on hand with their tools to fettle any bikes that needed tweaking. They seemed to be kept very busy – almost as busy as the burger stand right outside the front door !!!

Eventually it was time to head home, on the aforementioned wide range of bikes – some more modern than others ….

All in all it was a very enjoyable event, and hopefully the folk that joined us for the day enjoyed it as much as we enjoyed meeting them. It’s always great to see new people getting involved in, and inspired by, events like this – just don’t copy the Clan at home !!!!