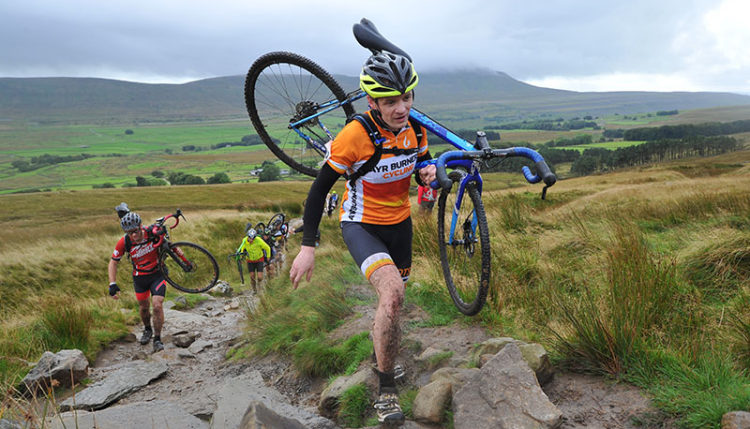 WHAT, WHERE, WHEN, WHY

Last year saw Jo Baxter, Myself (Kev Pugh), and Russell Mowat (Walkers CC) take on the challenge. We all finished in one piece and had a blast! – Review HERE

Spurred on from last year, my main mission this year was to complete the race on a singlespeed and with tubeless tyres rather than the heavy favourited Schwalbe Landcruisers. If the weather forecast was correct, i.e. wet & windy,  I was looking to equal last years time of under 5 hours; if it was superb like last year I was hoping for around 4.5 hours.

Not much thought or preparation was given in regards to 3PCX specific training this year. No Goat Fell hike-a-bike efforts, or 100+ repetitions of the “Dragon Hill” at Beach Park Irvine (just a mere 10-20 reps once or twice). This didn’t leave me with much hope in making up time, or frankly, surviving the climbs of Ingleborough, Whernside, and Pen-y-Ghent.

The main preparation was on the bike itself. Another Burner (Mr McGarvie) sold me his Cannondale SuperX frameset which I snapped up in a moment. This thing is light! BB30 bottom bracket for the eccentric hub, disc brakes, perfect! I fitted the Kinesis CXDisc wheelset with TRP Hylex hydraulic brakes, Ultegra cranks, fancy padded Fi’zi:k bartape, Clemets BOS tubeless tyres and I was set.. all under 7.8kg! A massive drop in weight over last years Giant TCX 1×10 at 9.5kg.

Hannah, my fiancée, was my support this year although she had no pork pies to dish out this time. When I say support, all I was asking for was water at Ribblehead. My thinking goes, but it may differ from others, is that you need need to finish this race pretty much unsupported with only the tools you carry on your back – spare wheels, spare bikes, etc, leave that for your standard cyclocross race, to me, the 3PCX race is more a Bear Grylls adventure (without having to drink your own pee, of course)

In the weeks leading up to the 3PCX I had no real training or grueling rides. One trip up Blencathra with the bike and a CX race in Bute. That left plenty of time to rest up and think about the horror of 3PCX, especially getting emails through from the organisers with weather reports (read: warnings), with attachments regarding hypothermia and such like.

Stopped off in Longtown, near Carlisle, the night before for a proper sleep not in a tent. I didn’t fancy camping in pouring rain and high winds before this race. It was an hour and a half drive down the M6 and we were there. Cars/vans lined up the side of the road just before Helwith Bridge, the start, no going back. No sign-on without showing your emergency survival bag/bivvy, whistle, and waterproof jacket just emphasised how bad things can get when you reach the summits or have an accident. The rain came down for 15 minutes and the coffee/tea tent was packed with riders trying to stay dry and warm, then we lined up at the start. It was going to be a tough day I thought. 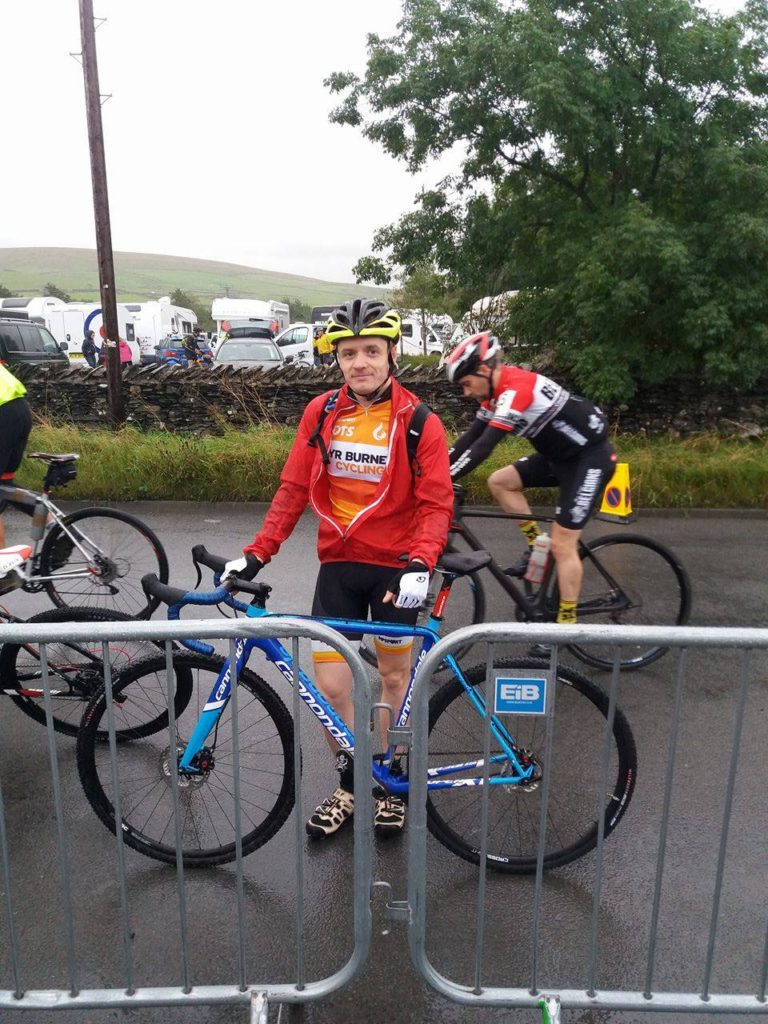 The race started and as usual it was a very quick blast up the road. I had spoken to a Hope rider who was also on singlespeed but was spinning like crazy on the road section, at least he could laugh about it then but I imagine it would get frustrating later on, not a great choice in gearing.

Entering the first climb of the day, Simon’s Fell, saw myself and 600+ riders struggling up what felt like a climbing wall for what felt like a lifetime, trying to find foot-holdings for unsuitable cycling shoes/cleats, and grass to pull on just to keep going vertical. Once you think you’re near the top, you’re not, after the plateau there’s another long struggle up into the low clouds. Over the fence, through some rocks, then off down the descent of boggy grass. Care has to be taken here as the bogs swallow wheels for breakfast. A few riders went down in front of me but alas I didn’t have the misfortune of landing on top of someone this year. Dibbed in at the foot of the hill and onto the road section towards Whernside. Time for some nutrition. 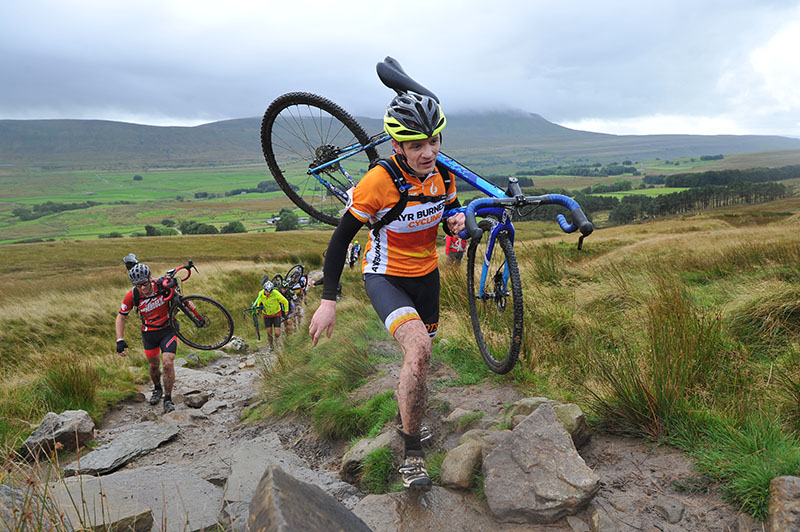 Still smiling, I have no idea why

The second peak mainly consists of flagstone steps which can be slippy when wet, and it was wet as the rain came down on the ascent, the steps also seemed to get taller as the legs get more tired. This went on for some time before getting on to the ridge where the wind starts to take effect, using more back muscles than I’d like just to keep the bike on my shoulder and myself facing the right way up. Once at the top the descent is a daunting one, flagstone steps all the way down, very technical. It was here I was worried the tubeless tyres would get slashed/punctured but they were fanctastic. There is also a grassy ‘path’ to the side, I opted for this occasionally as I deemed riding certain bits beyond my capability. Then it was down onto a gravel section down in to Ribblehead where I stopped to re-fill on water before the next road section to Pen-y-Ghent.

The road sections are funny on singlespeed, spinning out at 23-24mph then tucking in trying to get aero, still people whiz past. Come the short and sharp hill climbs though and I was passing them all again, not out of determination, just by trying to keep speed and momentum up. All in all I think I got the gearing perfect for my legs/strength.

I wasn’t looking forward to this climb one bit, partly due to how long it seems to go on and the fact my back totally gave up on this ascent last year. Being on the singlespeed with 34×15 (~62 gear inches) gearing I had to dismount and walk the first sections where people were cycling, very annoying! I felt like I was losing so much time. However, 1/2 way up and almost everyone was shouldering their bikes, BUT, the faster folk were hammering down the descent to the right of me and I knew I still had a long way to climb. Finally dibbed at the top and I knew this was the last tough section, the very fast descent over the loose stones. My arms were pumped and being shaken out of their joints clinging onto the hoods for dear life (actually twisted my left hand lever inwards I was holding on so tightly). Down the last wee section and onto the final road section towards the finish. I hammered it at first as I remembered it not being long at all but it seemed longer this time, my legs were finished as I crossed the finish line, I couldn’t have gone another mile.

Finishing time 4 hours 37 minutes, a 20 minute improvement over the previous year and bang-on my predictions before the race. Happy with that result. Just don’t ask me yet if I’ll be on the start line next year. 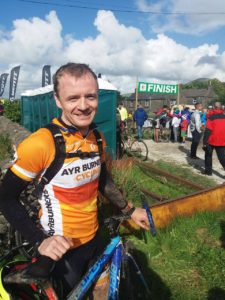 Happy to finish my 2nd 3PCX with both man and machine in one piece!

I spoke to Gary Macdonald afterwards who informed me he finished an impressive 4th place! I raced with him at Bute the week before which he had taken 1st place in quite comfortably. He’s got a great future ahead of him and I look forward to being lapped by him in the SCX series this year.

Time for some recovery drink in the form of an ale or two at the Inn, perfect finish to a perfect race with no falls, mishaps, mechanicals, and a faster time than the previous year! 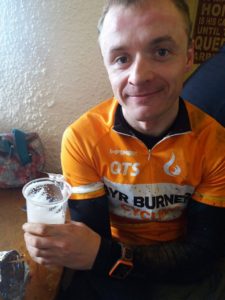 Singlespeed was superb and really didn’t seem like much of a disadvantage. I only felt like I may have lost time on the road section and on the start of Pen-y-Ghent, however, Strava shows PR’s over almost all segments than the previous year.

The biggest difference was going tubeless. The Clement BOS tyres were absolutely superb in the mud sections of Ingleborough, over the steps/rocks or Whernside, and the fast loose stone descent of Pen-y-Ghent. I felt confident at all times. The weight saving is also huge. They took a beaten and they survived, I would definitely recommend them.

Thanks to SportSunday, Steve Fleming, & Chris Meads for capturing the day on digital film!