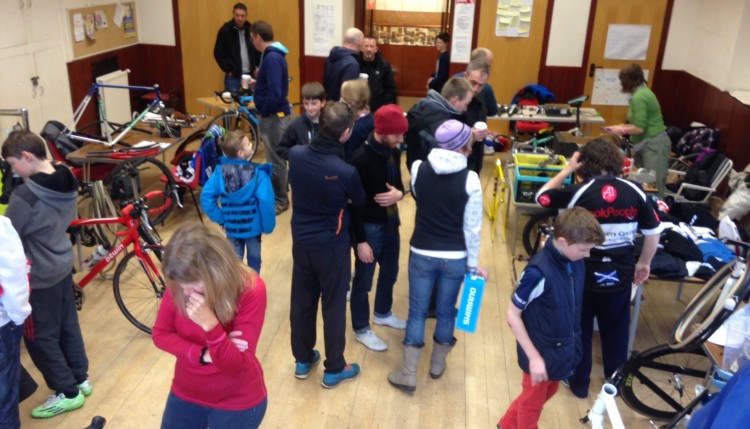 It has been a busy, busy week for the Ayr Burners.  To take us through it here are a collection of the best tweets:

Big thanks to @FWCC1934 for hosting The Burners tonight…Some very sore legs in the morning we think !! @GraemeObree pic.twitter.com/JG9uQ8Nqzx

The kids visited the Fullarton’s training base by Kilwinning for a handicapped race using Tacx VR trainers. Good wholesome fun. Then the adults had to come along and spoil it…

The Ladies ignore the weather and enjoy a great ride

Half of Ayrshire came to our cycle jumble

We were glad to welcome members of Walkers CC, Fullarton Wheelers, Colyton CC, Sandy Wallace RT and Ayr Roads along to our jumble. We had some super bling along including the frame Stuart Dangerfield set the British 10mile TT record on! Looking forward to next year already!

We welcomed a special new member

Committee member Chris JG became a father for the second time when baby Lucie was born on Monday.

Our 10% of Tommy Challenge gets off to an ominous start

Horrible to read the following message the night before our third challenge begins:

Extremely sad to announce that aprox 8.10am Steve was ridden into by a moped Steve tried to carry on but stopped in Wellington.Pls next post

We will go ahead with the Challenge as whatever the outcome we have been hugely inspired by Steve’s record attempt. Our challenge will now be based on Tommy Goodwin’s original 1939 mileage.

A busy week, but lots more to come. Enjoy the lighter evenings and avoid mopeds!