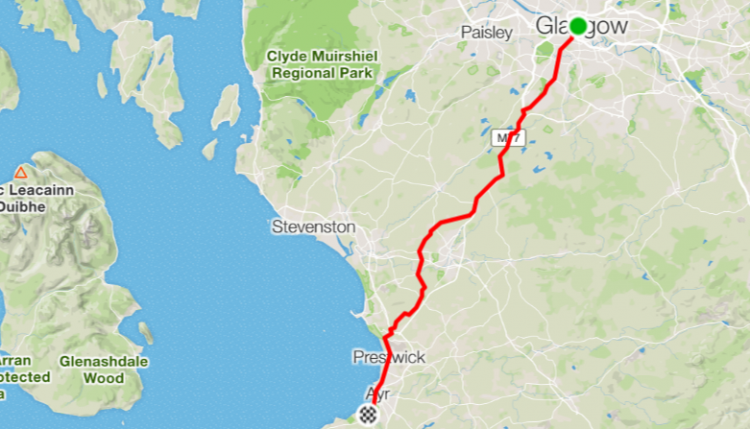 On the Road, by Donald Laurie

A Tale of Two Cities

Ok, perhaps Prestwick / Ayr doesn’t count as a city, but after getting caught at every set of traffic lights between Prestwick Cross and Doonfoot, it starts to feel like it. Especially after battling against a stiff headwind all the way over the moors from Glasgow. And don’t get me started on the number of traffic lights there either.

Rewind a few weeks to the cafe at the Burns Centre after a Burners Saturday ride. I mentioned that I occasionally cycle home to Ayr from Glasgow and would like to do it with a club member or two, and someone (possibly Lindsay McGarvie) suggested that would be a good idea for a story on the web-site.

One Facebook request later, and we had 5 Burners lined up to join me – one for each day of the week (well sort of, but more of that later) and a week in August that suited everyone.

Day one and it’s off to the train station to get up to Glasgow. Anyone that knows me will know that going up and back 5 days in a row would be a stretch, so Scotrail it was. They take a lot of flak about fairs, reliability, etc but, to be fair, they’re pretty good as far as bike transport is concerned – at least on the Glasgow-Ayr line. They have at least one bike coach per train, and here’s the sign they display – 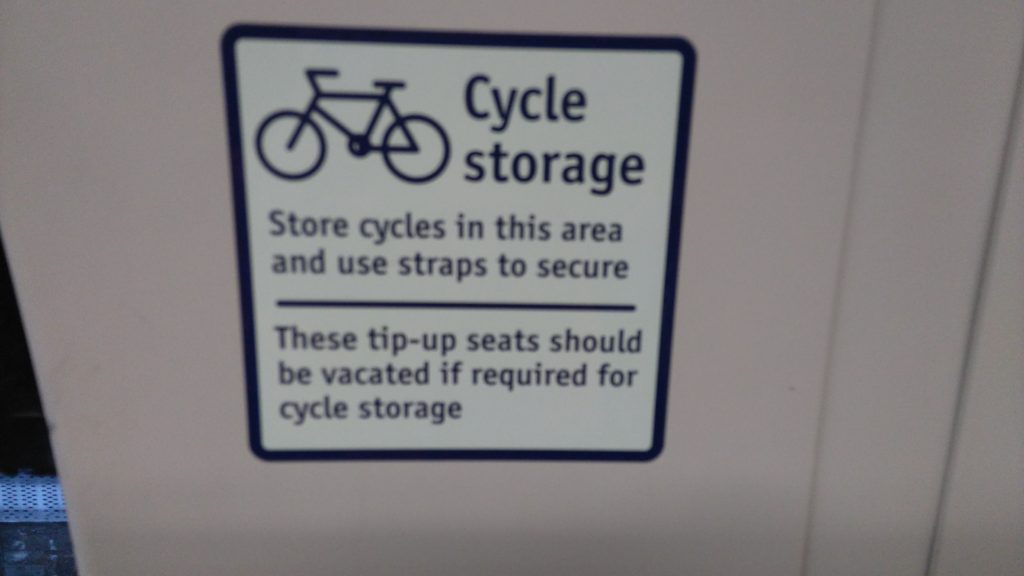 It appears that if there are folk sitting on the tip-up seats, you can ask them to move so you can stow your bike. I must admit I felt pretty bad asking the heavily-pregnant woman and her granny to shift but hey, rules are rules.* 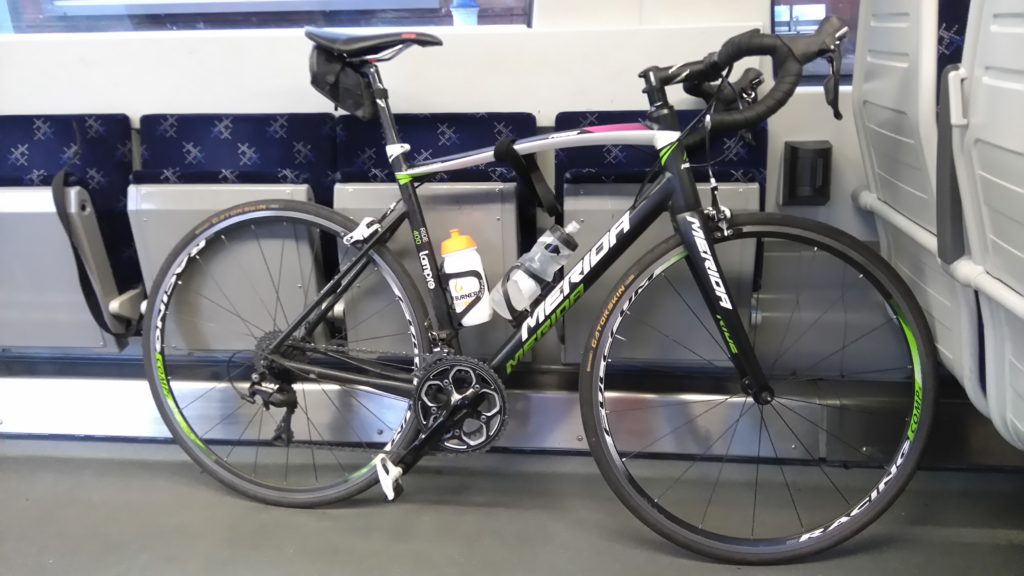 There were normally 2/3 bikes on each day, and it appears that regular commuters don’t bat an eyelid. Quite right too !!!

My travelling companion for the first day was Frances Stevens. We met up at Central Station and took my preferred (ie only one I know) route home. That involved battling through Shawlands and up through Newton Mearns to the old A77. After that it was down via Kilmaurs, Crosshouse and Gatehead to Symington, then Kerrix Road to the Airport. 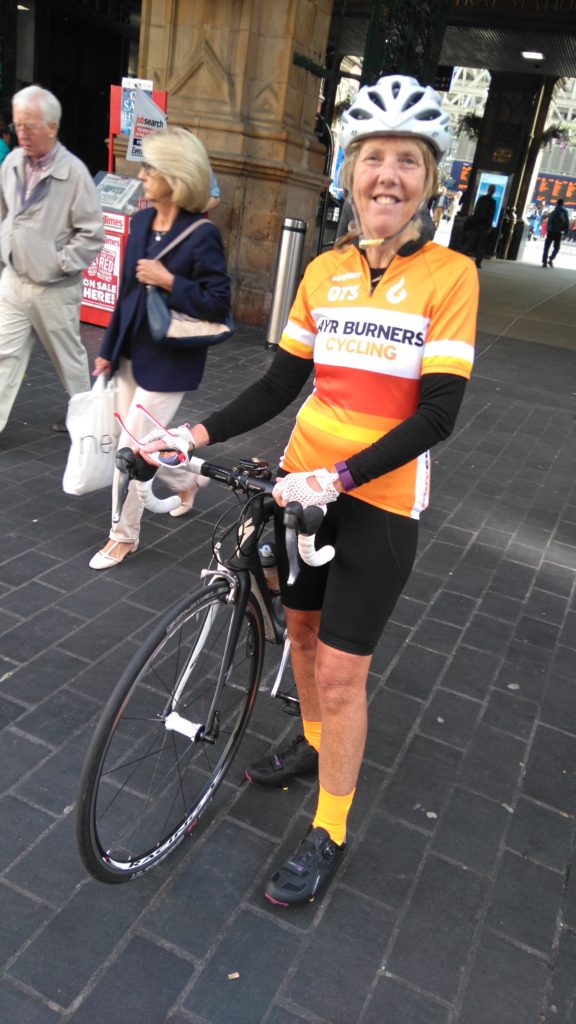 Despite the worst road surfaces this side of Belgian cobbles, Frances was racing along, and got a QOM shortly after we split up just before the airport. She would probably have managed more before if I hadn’t been …. conserving energy, yes that’s it, conserving energy. Anyway it was a great start to the week and I thoroughly enjoyed it – and it didn’t rain.

Tuesday didn’t look too promising weather-wise, but as Bill McCrae and I Ieft, it brightened up. Bill had an alternative route through Kilmarnock which avoided all the rubbish road surfaces and was about a mile shorter into the bargain – what’s not to like ? 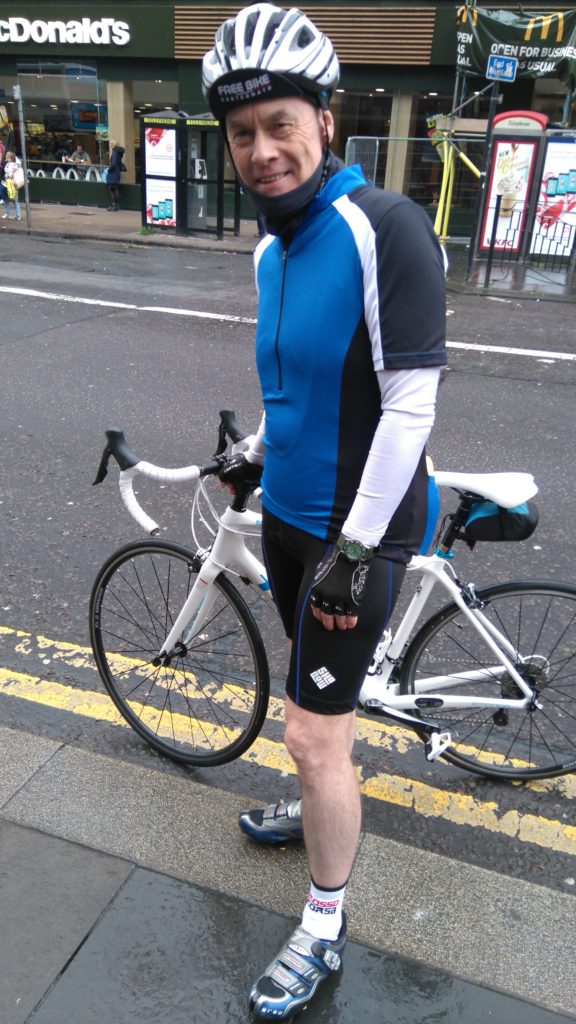 I decided to use that route next time, but the next day brought another different route. I had two Burners for company on the Wednesday (Chris Johnson and Matt Wing) although it took us a while to meet – how many bridges over the Clyde are there, and how difficult should it be to all meet at the same one at the same time ?!?!?! 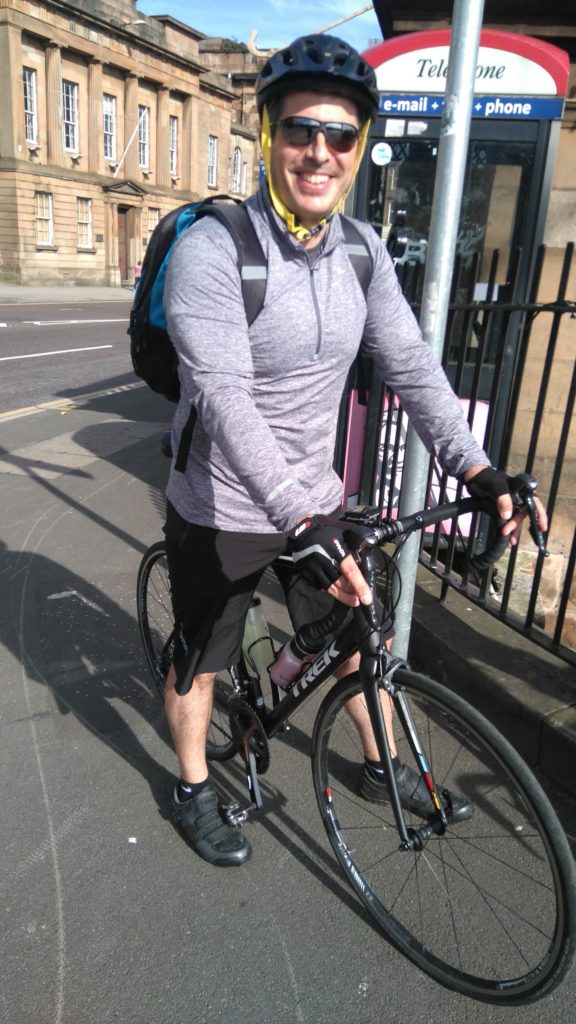 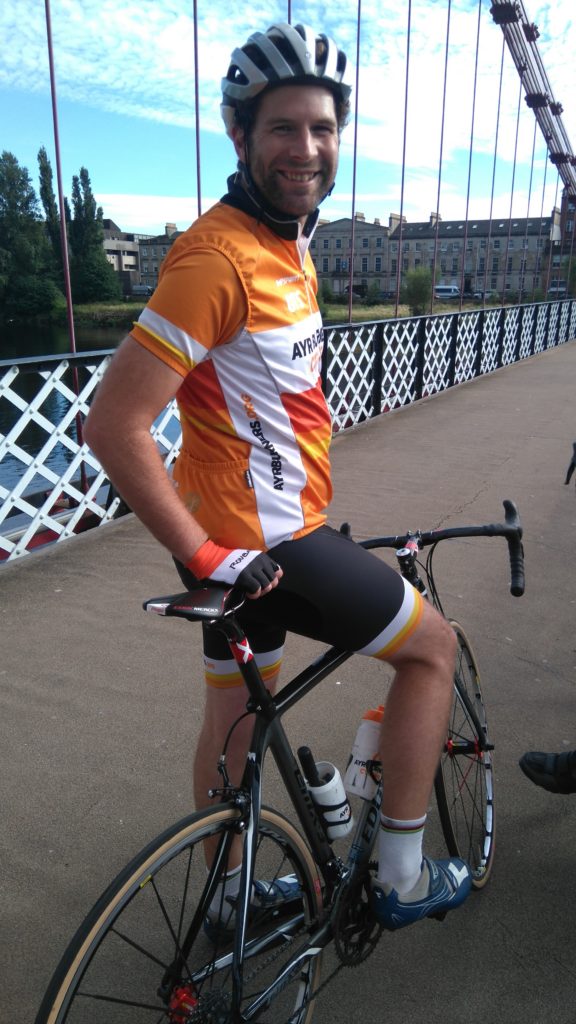 After the usual slog up past Newton Mearns, Chris took us on a detour over to Stewarton and home via Irvine and Troon. Despite the extra distance, it was a fantastic run so I can almost forgive him for eating so many of my Jelly Babies.

As both Chris and Matt could only manage Wednesday, it meant that Thursday was a solo ride home. I thought that I’d be be dreading it by then, but come the day I was still looking forward to it immensely. Having said that, I couldn’t confidently remember either of the new routes I’d been on that week, so it was the same old, same old home. Surprisingly none of the hills were easier, or road surfaces better ….

Jon Mahoney had the job of keeping me honest, and making sure that I did the full week, and didn’t take the train home on Friday. We both began to regret it as soon as we left the city centre – the head-wind started off strongly and didn’t ease off. It truly was the worst of times (see what I did there ?). Jon had work that evening so we took the quick way home, and eventually made it home in decent time, despite the wind. However, as soon as we hit Prestwick the traffic lights slowed us as effectively as the head-wind. 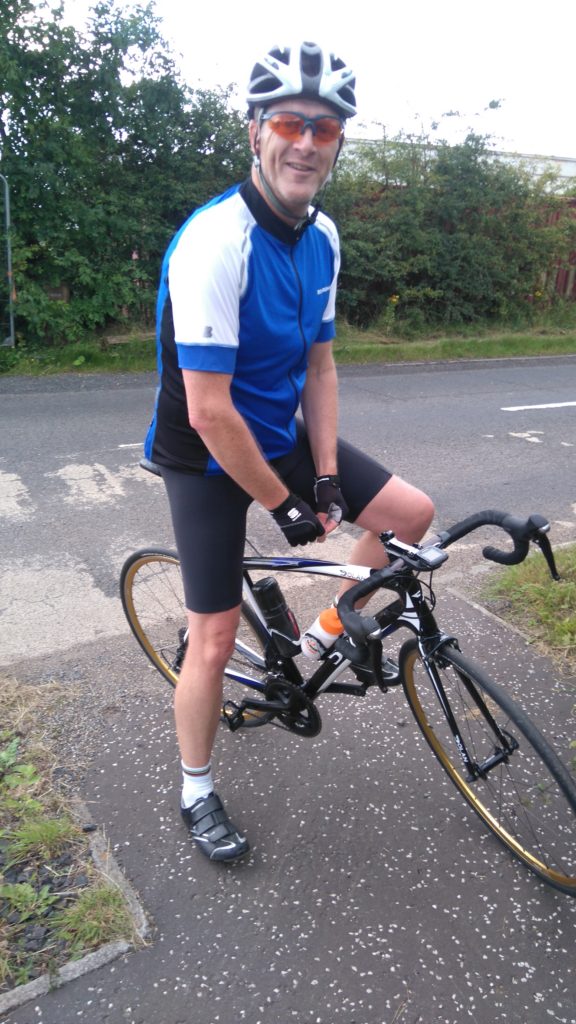 This was really just an experiment to see if it’s feasible to do that level of commuting on a regular basis. Surprisingly, I didn’t have any issues from a fitness or enthusiasm point of view. In fact, the longer it went on, the more I enjoyed / looked forward to the ride home. The train aspect was good too, although I didn’t save as much cash as I expected. A normal weekly ticket is £58, but five singles costs about £41,

Issues include the volume of traffic, in particular through the South Side, the poor standard of driving (everywhere !!!), and the number of traffic lights so close together. I could live with all of that, the big issue for me is the time and planning to do it regularly, especially as
the evenings get darker. If I lived up to 10 miles from work, I’d definitely do it every day.

One unexpected benefit is that over the week, I lost 3lbs and dropped a dress size, despite, as my wife told me, eating like a pig all week (I think she meant horse …).

I’d like to sincerely thank all the afore-mentioned Burners for keeping me company, putting up with my inane chatter, showing me new routes, keeping me going and generally just having fun riding bikes home.

Maybe we can do it again next year ……

* and I didn’t really kick a pregnant woman and her granny out of their seats. Probably.

The best of the Ayrshire Alps Sportive