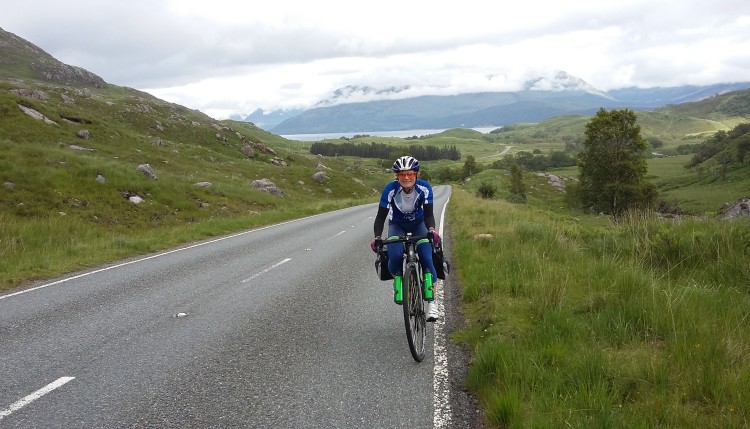 Husband and wife JP and Joanne Baxter first met on a cycle tour of Scotland, so what better way to celebrate a birthday than loading up the bikes and enjoying the Scottish scenery.  Of course, things were probably simpler before they were married and JP was still trying to impress.  We understand that the tour was punctuated by ‘panniergate’, where bikes had to be swapped after JP had tied all the heavy things to his dearly-beloved’s luggage racks…   Anyway, here is JP’s version:

Once we had dispensed with the initial challenge of locating the top-secret long-stay free parking option in Oban, our 4 day journey commenced with the 60 mile prologue onto Ardnamuchan. Heading North from Oban, the Corran ferry (Free for bikes and foot passengers) came as welcome relief from the busy-ish A828, with Loch Sunart providing some pleasing vistas as the sun made its first appearance of the voyage.

Sustinence was taken at Strontian before setting up camp for the night at Resipole – Great site, light on Midgies, heavy on German campervans with the accompanying reek of burning Bratwurst filling the air.

Day 2 – Resipole to Sligachan
The Primus was fired into action early doors (1030am), and fueled with porridge and coffee we set off towards Moidart on the A861 – Stunning scenery, but seriously, seriously lumpy. The gearing was tested, scrutinized, and lambasted as the fully laden push irons plodded up the inclines towards Loch Ailort.  After a grey start the blue skies appeared just in time for our detour to Arisaig and the Shining sands of Morar. So far, the camera had been in and out of the back pocket like the proverbial fiddlers elbow, with every corner and summit providing a new panoramic smart phone photo app opportunity.
Mallaig to Armadale (Skye) was the second ferry journey of the trip (Hopscotch 12, £30), with the longer steadier climbs and bigger panoramas of Skye providing contrast to Moidart and Ardnamuchan. Sligachan campsite was reached after 75 mighty miles, with the still summer evening conditions providing incentive for the midgies to indulge in obnoxious activities.

The shining sands of Morar (note heavy bags on Jo’s bike, now being ridden by JP)

Day 3 – Sligachan to Horgabost
No early Primus activity this morning, with the preferred option being the 10 mile ride into Portree for breakfast – namely due to the strong, vicious and well organized midgie battalion at the campsite. With a 2 o’clock ferry deadline in Uig, we pushed on via the big climb of the Quiraing, which rises up to a heady 900 feet and finishes with a 16% double hairpin grind up to its burger van occupied summit. Ferry number three provided a breather before Harris and the legendary Golden Road – A breathtaking stretch of tarmac that twists along through the east of the island, which resembles a lunar landscape, interspersed with hundreds of tiny fjords and bays. Dozens of short and steep energy sapping peaks and troughs brought the stove out at the halfway point for a round of outdoor porridge in a suitably scenic spot, with still a fair few miles to clock in before reaching the designated encampment on the west coast of the island. After 75 tiring yet dazzling miles in the sun Horgabost beach was reached with its white sands and satisfying outlook towards lovely Taransay. 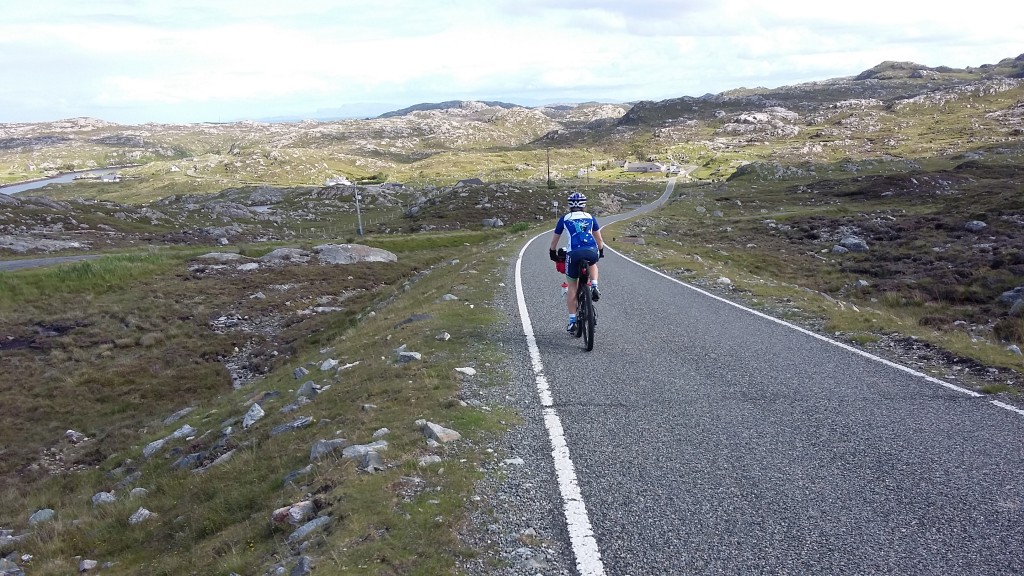 Day 4 – Horgabost to Kilbride
The 0930 sailing from Leverburgh to Beneray (ferry 4) ensured that a quick exit would be essential from base-camp Horgabost on Harris, and so after a quick porridge and coffee infusion wagons rolled to Leverburgh port, where the second breakfast of the day (egg n bacon rolls) was consumed.

More blue skies greeted us upon arrival to North Uist, where a quick liquid stop was taken at the hotel in Lochmaddy. The flat, barren, peatbog pocked landscape of North Uist, through Benbecula and onto South Uist (via the network of Causeways) provided contrast to the 3 previous days surroundings of mountains, peaks and crags. A game of ‘spot the tree’ kept us entertained as we traversed the long recumbent road through the Southern Isle, eventually reaching Kilbride which sits on the far southern coast of South Uist, overlooking Eriskay (Whiskey Galore fame) and Barra. After 62 miles and a grand total of 280 ish for the 4 days, the final evening was enjoyed with a re-fuel and another dram from the depleted well traveled bottle of single malt. 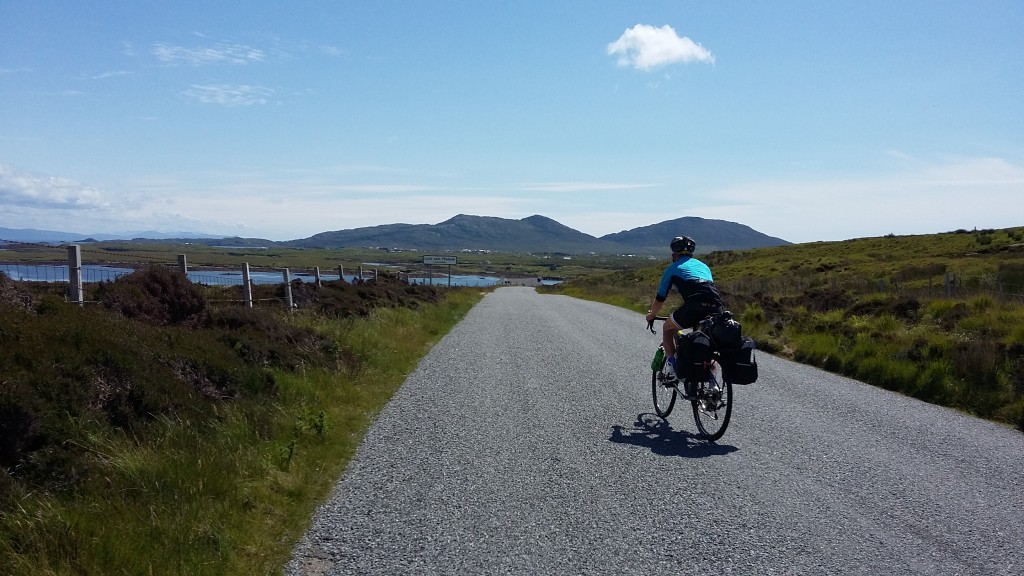 Thanks to JP for the words and picture – we are not jealous, at all.