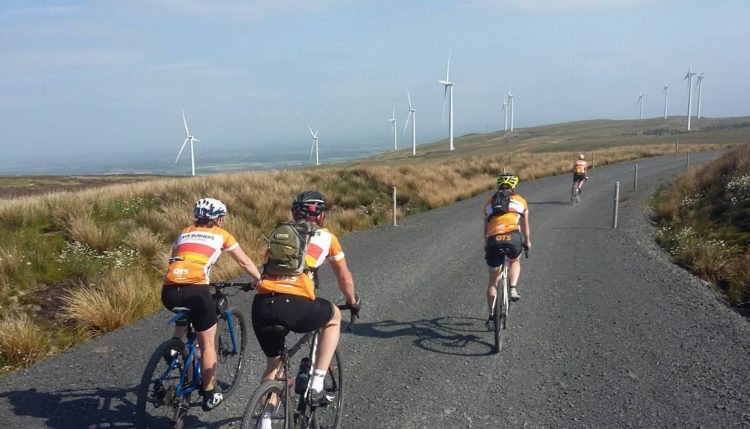 It was no use….
It was 1 am and the days events played over in my mind, keeping me awake….
I had to write it….Chris JG told me I had to write it….
So dear burner and those about to burn, visit via the windmills of my mind the windfarm and trails of the Kelburn Adventure Cross…. 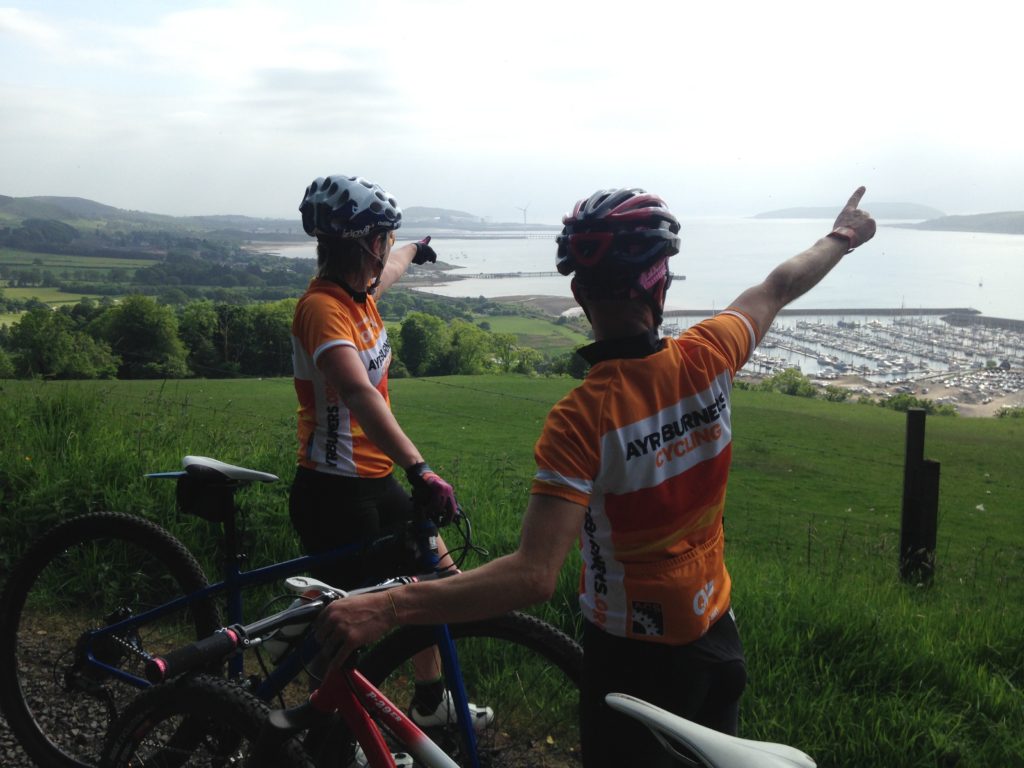 The day started differently than most, at 3pm.
The Baxter bus was handy for me as it contained my cycling pals JP & Jo Baxter and the bus stop was just along the road.  The exact location of our rendezvous was not known until we all met up, which seemed to be a decent enough place.  Ride leader and single speed sorcerer Kev Pugh & Chris JG (huge fan of Bruce Springclean) completed the 10 wheeled unit.
The Haylie Brae was the first leg softener which led us into a wood through which we climbed eventually revealing stunning views doon the Clyde.  After about 25 minutes of climbing…..we continued climbing. We were now on a hard packed dust road leading into the windfarm.
Thankfully Chris got a puncture so we could stop climbing for a bit.
The windfarm is a surreal environment…nature juxtaposed with stark white colossal flying sculptures with the drone of invisible aircraft – Awesome ! 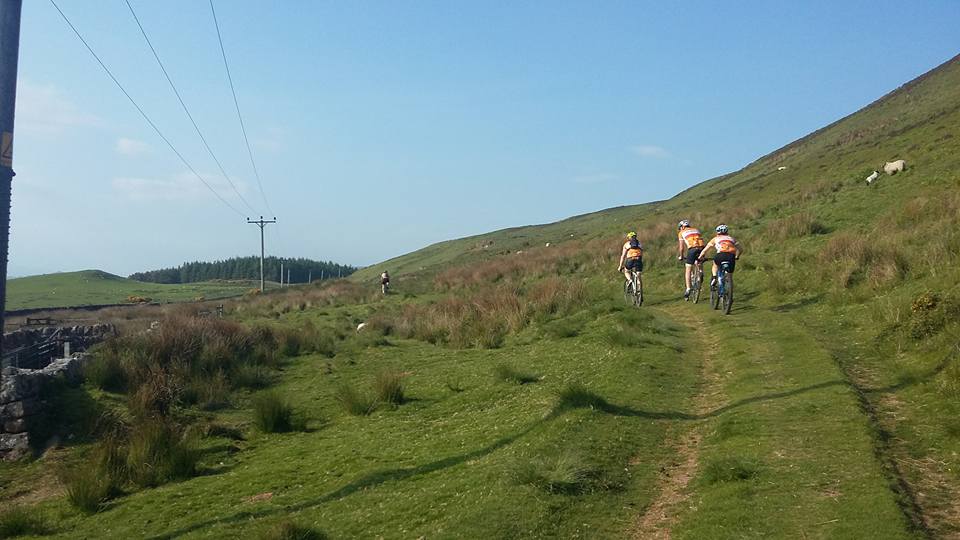 Descents on these tracks can be twitchy with the loose surface…Caution required.
Some shouldering of the bikes took us 150 or so meters across some moor followed by more trail and a descent through an old farm yard which led to the Fairlie Moor rd.  The moor road descent to the coast is a belter….At around 2/3 the way down we cut back into more farmland and headed northish along some land rover tracks toward largs.  On a technical descent through a wood I took a tumble and over took my bike. No harm done to bike. 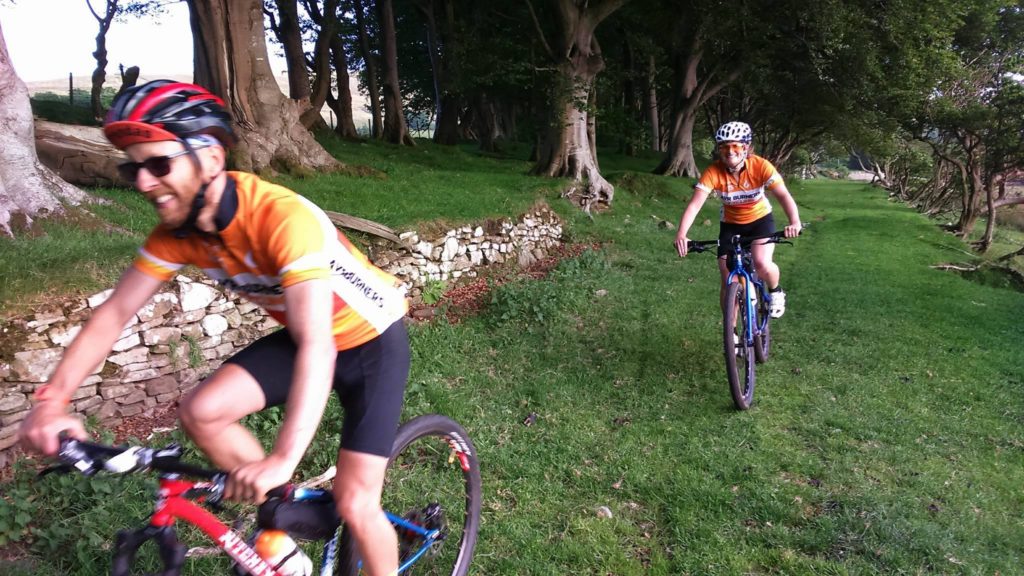 The ride leaders asked the typical questions to ascertain what condition my condition was in, such as pin numbers and passcodes !!
Kelburn park mtb course was an unexpected final bonus before rolling into Largs for some Scottish salad of chips, King rib suppers, Ice cream and the broo.
THE GOOD TIMES ROLL. 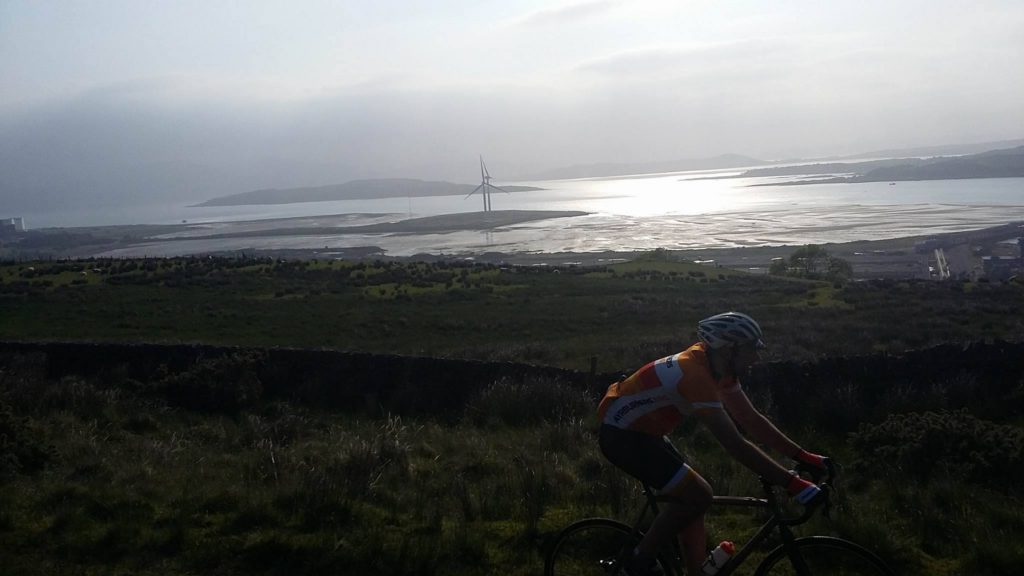 Editor’s note: the above words have been attributed to Gary Currie.  However, we have reason to believe he may protest…