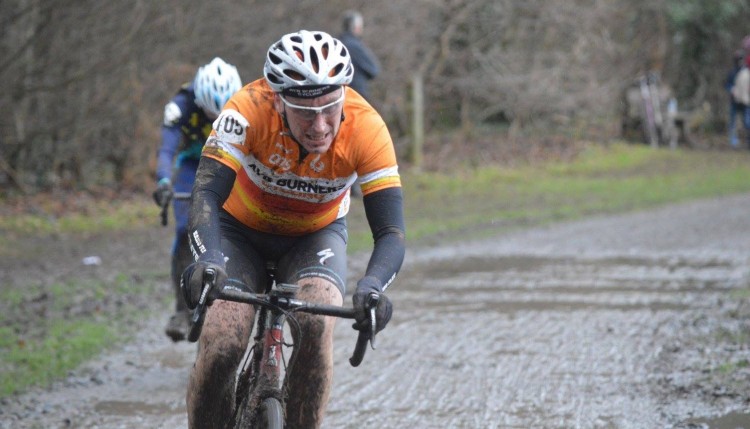 Doonbank Trofee: View from the field

Ayr Burners Cycling were represented across the fields at the Doonbank Trofee – the first of our rider accounts comes from Gavin McKellar of Coylton, returning to racing after a 20 year break with a stunning third place finish in the Super Quaich ‘B’ Race.  Thanks Gavin:

Being woken up at 0630hrs by my youngest wasn’t exactly the start I had planned to my Sunday, especially as you could count the hours I had been in bed on one hand, easily, [Gavin joined us straight off a back shift!] but he must have sensed it as well – it was race day!! Doonbank Trofee was upon us!

It was 1995/6 when I last raced a competitive event, the Scottish Forest Mountain Bike Series, so to say I was a wee bit nervous was an understatement. Quick race day breakfast prep, car packed and down to Rozelle to meet the rest of the Burners and helpers for marshalling duties.  I got there as the youth races were starting, heard the horn go, the bikes fly off down the straight and then saw the “race village”, woo hoo!  Almightily impressed, the organisers had got it sorted: Sparks course, Coffee, pizzas and the QTS sponsored rally car along with the tunes going – the buzz was evident, took me right back and shook away any cobwebs that were hanging about.

On helping get the car parks sorted, hearing some more banter and chat about how far folks had travelled (132 miles one bloke said!), and when they left that morning I realised the cyclocross scene I had found through the Burners was very popular and this course was causing a buzz in the new arrivals.

Having done a few Sportives since getting back into cycling a couple of years ago I was used, once again to the pre ride nerves but this day came with a podium and a whole new course to Ayr. Scott Knox (aka Foxy) had been talking to me the day before as we walked around during set up by the build team and mentioned he thought we could have a chance at a decent result.  I then then thought, damn, Scott’s competitive but at least we could ride this together and push each other on, help get through the lack of sleep from working the night before!

After the youths had raced I met our CX superstar, young Harry McGarvie, who was buzzing after a great run and podium finish yet again who said the course was great fun: muddy sure, but fun. Little did I know mud would be the word of the day.  My bike was gleaming new on only its second ever run, but CX bikes aint meant to be clean forever! 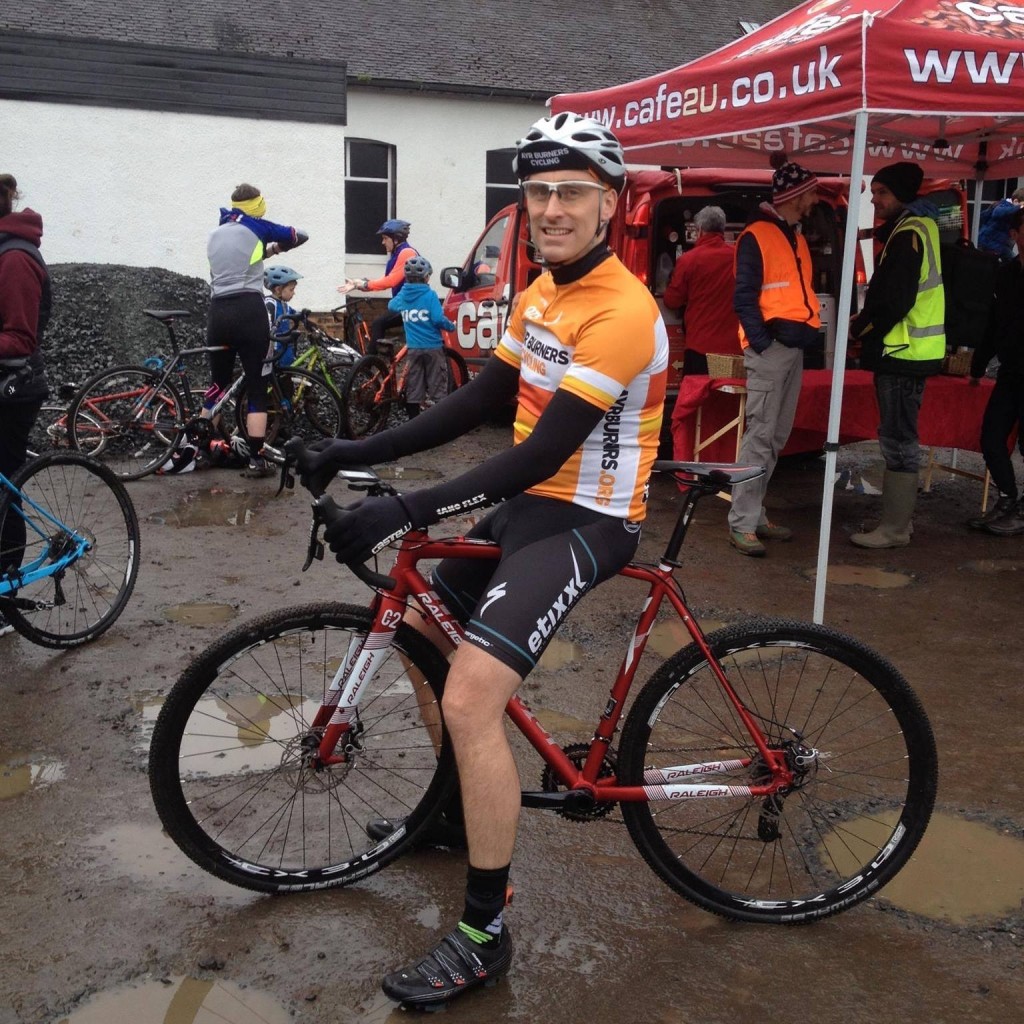 As we gathered together for JP to send us off, Scott started to think about tyre pressures, JP had casually walked by, felt his rubbery rings and stated they were too hard, so together we let some pressure out to help on the muddy surface, sadly it turns out Scott let out more than he bargained for.

Jo, Scott, Jonny, Trev and I then lined up with everyone else for the B Race, my nerves were really building now, had I bitten off more than I could chew here? With my wife and kids happily waving and cheering me on from the side lines the horn went and we were off!

Speed quickly built along the gravel straight and then SPLOSHHHHH, the first left hander was a sign of things to come, tires lost traction, bikes slid everywhere and the whoops and yells of joy from in the middle of the pack was ace!! I couldn’t stop smiling, even laughing to myself, I had wanted to do this for years, get back into a race and have a laugh while knocking lumps out my bike and body.

The first hurdles approached, what had JP said on those summer skills nights in Troon? Dismount, jump, run, hop, remount and peddle like fury!! Into the turn at the duck pond and the pack was still tight, surface greasy but not that bad, skipping out the woods and up the path before turning onto the old pitch and putt, my heart rate was flying and adrenalin really getting going, Foxy Knoxy must be coming by soon I thought? Using the bikes momentum and off camber sections to keep the speed round the turns and onto the dismount for the steps, i realised my legs were not in a running mood, if they ever are.

Back on and a slog round to the top of the drop down to the hedges, the course looked just like the ones I had been watching the worlds top riders race round in Europe:  tapes, fences, steps and now hedges to slide along beside. I knew the first time I went down what I can only now call ‘Lines Hill’ due to David Lines and his spectacular fall and bellyslide for the cameras, that I had in fact taken the wrong line and was bogged down immediately. Keeping the bike moving was a challenge around the whole bottom section and then the Slaphouse Burn Climb reared its head. OMG !! My legs were screaming out at me, trying to run, waddle, whatever, just carry my bike up the hill.  By the top I was done and glad to remount and down to Peter Ferrier’s marshalling point (number 9) and the rope assisted hill (not that I ever saw or used said rope as I was so in the zone by then). Peter screamed encouragement and at the top it was jump on, keep it up right through the last boggy section and race through the single track along the woods to the start line again, and that was only 9 minutes of a lap. Jeeso, how can I do this?  And where is Foxy?

By now the pack was thinning and I realised I was pushing through, a rider here, a rider there, I recognised a lot of the team kits from pictures of previous races and was buzzing to be riding amongst them. As we dropped down out the woods onto the path a rider in front couldn’t quite make the turn and dropped off the track in to the big ditch, ouchy!!

On the pitch and putt side, David Toner shouted I had made it up the pack and keep going at that pace, it was killing me but I soon calmed down until that Slaphouse climb again, jeeso I just cant run!! Graham shouted Foxy was catching me and the fear set in, go harder! On the third lap round Peter Ferrier had turned into a roaring Breach merchant but I realised I was pushing the pace nearer the front. Coylton CC’s Graham shouted from the side, asking how many laps, I couldn’t talk, held up 3 fingers and kept the head down. “keep left!” I asked the rider infront – ooft, that was Trev, we were starting to lap riders now!  This is ace I thought as we churned the course, slipping and sliding and only just keeping the bike upright. Another rider picked off and at last I found my line down Lines hill and in beside the hedges, Ferrier lit up the course with whoops of encouragement and yells of joy!! That really helped me keep going hard!

On the needle head at the hedge end I heard local Kinetic coach Scott McLean shout about pacing and suddenly a song came to my head “ Summer “ by Calvin Harris – a song familiar to those that go along to Scott’s Tuesday night circuit training.  This gave me a pace for the legs along that hard chew and back to Slaphouse, by now am sure I could see the Peddle Power strip of David Hamill and suddenly the last lap sign held up –  Ya dancer!

All out for the last lap. Sliding along the mud I saw it, the course tape had been burst and was stretched out over the track, stupidly and a lesson I’ll learn….. I went through it with the result being a rear mech and wheel totally caught up and I had to jump off to release it. I concentrated on the repair and knew at least 1 rider had gone by, it was hard to judge due to the tail end of the race now being amongst us. Back on and Toner shouts wildly at the steps, keeeeeppp goinggg!! I was off again for longer over the steps, tape wrapped tight in the cassette meant gears were jumping under pressure now. Ferrier was roaring harder that a drunk in Saltcoats Main Street and I was suddenly on a head to head with Rhys Donnelly, a Glasgow rider at the needle head at the hedge, Rhys took it just, well played.

We went either side of the track along the burn side and kept head to head, he looked back at the dismount at the foot of the Slaphouse and went like a hare up that hill, Kudos sir, my legs were burnt and that break was not recoverable for me. The last dismount for the rope assisted climb, still never saw the rope but it was my best dismount and run up that hill, was getting the hang of this now!

Tearing through the woods I heard the wee voices, goooo Dadddddyyyyy !!! I could have yelled in delight as they watched me cross the finish line and came running up for a high 5, was a great moment.

Due to this and a bit of banter I never watched the rest of the pack come in or realised the lack of riders over the line already. My first sign of a podium was when JP came up and congratulated me and said, your third mate!  Wow!! I had not expected that. I met with Foxy and found out that sadly he had a mechanical and retired early but the thought of him chasing me all the way kept my legs turning.

I managed to see some of the A race and was mightily impressed with the speed and handling skills of those riders, the sound of those carbon frames and tub wheels rumbling off the gravel onto the mud was impressive, the pit crews working away, the cow bells and horns blaring, flags waving, spectators and amazed dog walkers who came across the race were all in awe. The day was superb, just superb, muddy fun. It was great to be back in a race again and this has given me the hunger to enter more. 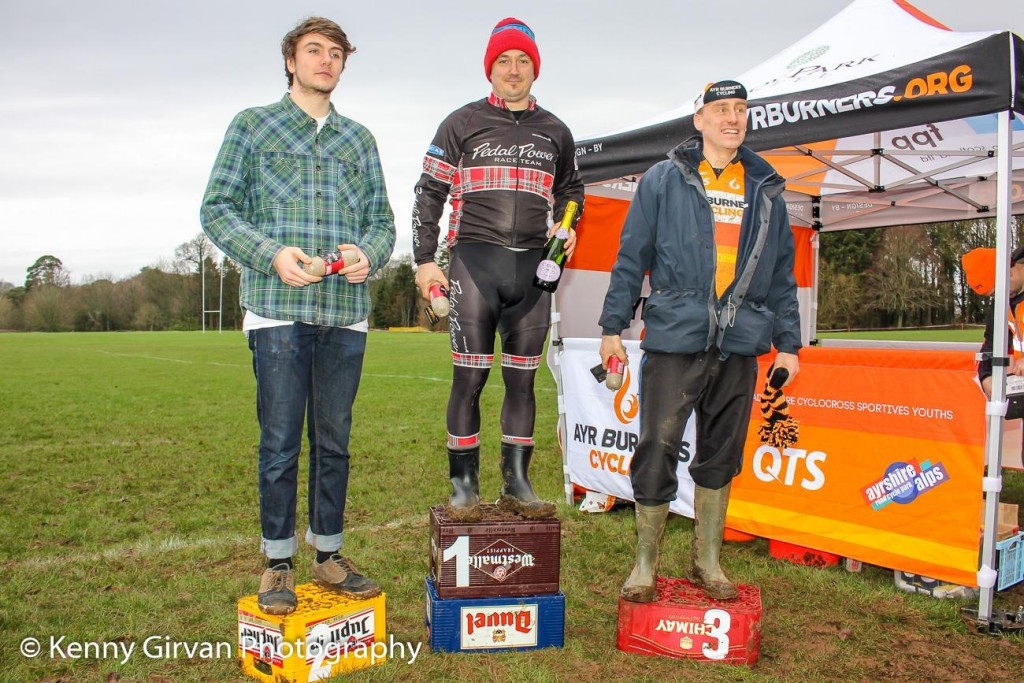 I am now a major fan of Cyclocross ! As I stepped onto the 3rd crate at the podium to collect the most delicious Haggis and some pennies for a Big Bobble Hat I thought it ironic as I was racing on the Raleigh RX, when the last race I did when aged 16 was with the Raleigh Youth Development team, just wish I had kept it up all that time.

This, good people of Ayr, this is Cyclocross, and I really hope it’s here to stay!

Hundreds turn out to Rozelle for Doonbank Trofee