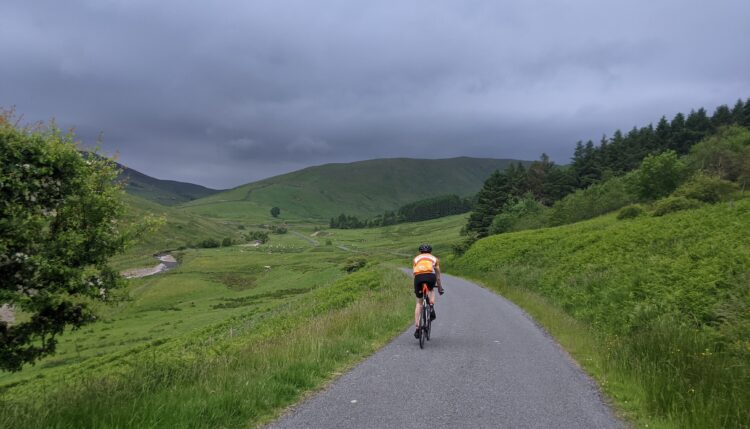 Back in 2019 a group of the Burners completed the Chase the Sun challenge ride, from the East coast at dawn (in Northern England) back to the west coast of Scotland – 200 miles in a day. Having been inspired by this Alex & I entered to take place in 2020. But it wasn’t to be……COVID caused the 2020 challenge to be cancelled, and indeed nearly put paid to the 2021 edition too. Even a month out we still weren’t sure it would take place – doesn’t make for easy training. That said, who needs a challenge to keep cycling your bike?

Completing a long ride like this isn’t just about being fit enough to pedal the distance, you need to plan and practise your eating strategy. When it comes to food, everyone is different. Alex prefers commercial bars & gels (I won’t advertise which brand, but he’s found one that works for him – ask on a club ride if you’re interested). I prefer a selection of homemade snacks (fruit n nut rice cakes, cocoa & dates balls and oat & nut balls), each a different shape so I know what I’m picking out my pocket. Timing is different for different folks too – my plan was to eat 1 hour in, and then every 40 minutes until the end! Given that we would be riding for over 12 hours that’s a lot of snacking.

Unlike the previous group (and indeed many on the day) we were doing the route self-supported, so were hopeful of no major mechanicals. Thankfully we got some of those out the way on training rides beforehand (Alex broke a spoke a few weeks before). On the day we were lucky and didn’t even have any punctures.

So the event itself – was really weird to see so many people the night before all arriving for the registration. After 18 months of COVID restrictions and smaller group rides is was amazing to see hundreds of riders arriving to sign in. Some larger groups (the local CCC bunch had around 15 riders), others were taking part on their own. It was a crazy early start (our alarm went off at 3am) for a swift breakfast before heading out to gather for the start at sunrise. We were able to get a small bag transported to Ayr – quite glad not to have to carry it for the journey.

The early start meant a chilly start – we’d opted for our usual Burners kit but with waterproof jackets on for the start to keep us a bit warmer. Keeping within COVID restrictions, and to be honest helpful for any early road users, we gathered in waves of about 30 and were set off a few minutes apart. It was great to get going, and being flat as we left Whitley Bay the group sped off heading away from the shore to weave our way out of the city and off towards Morpeth. Fairly quickly the groups split and found their own pace. Quite different being in a bunch where some riders had obviously not cycled in real groups before – in Zwift (or others) you don’t have to do things like point out potholes, let people know when you’re pealing off or turning ! I had a real near miss when the guy in front of me at a real last minute moved to the right so he didn’t go off up a raised cycle path.

Within an hour or so the groups had really separated so Alex and I were cycling along, heading towards the first identified stopping point (breakfast at Kielder Water). The hills through Northumberland were shrouded in East Coast haar – thick in mist and fog. Having lived in the east previously I was glad I knew that we’d lose it when we got further inland (west).

Kielder was just a midge fest – early morning midges are not to be messed with, so after a quick toilet stop we headed on to escape them (post cycle note – they still managed to catch us both).

The road after the Kielder stop was really nice, with plenty of nice flat straights where we made full use of our tri-bars to keep aero and efficiently speed through the trees. They were also great for the stretch on the A7 before Langholm which was the busiest and fastest road on the route – definitely worth 2up TTing it alongside the traffic.

Next stop was Langholm – called a lunch stop, but we signed in at 09:59. Not even 10am and we’d made huge progress. This time we did grab a cup of T / double expresso – I was more than ready for some caffeine. Food wise though, our regular snacking was working wonders so we decided to keep going and keep snacking.

On the whole the roads were all nice quite lanes, much like Ayrshire, with gentle rollers. No major climbs, and some lovely views as you cycled through the valleys. There was even a surprise ruined castle round one corner, in the middle of no-where.

As we headed towards Lockerbie the rain started – so it was back on with the rain jackets. This was my low point – the rain was so heavy I couldn’t see the screen on my Wahoo easily (which was needed for the route map). Think I was also conscious we were still a long way from home. Definitely a bit of just keep turning the pedals was required for a few kilometres. I was jolted out of this by 2 large dogs that decided to make a beeline for me whilst barking their heads off. I was none too amused thinking I was about to get my legs bitten (or knocked off). Not sure what they didn’t like about me as they’d let Alex cycle past without any reaction. However, the plus side was that I got an adrenaline injection and the rainy blues were left behind.

Throughout the day I’d set up my Wahoo to not show me my total distance (or a count down of how far we had to go) – preferring to just have the wee bit of the upcoming route showing, along with basic stats (heart rate and current lap time were the most important). I found it helpful to not think about how far there was to go and focus more on enjoying the current section. I used my current lap time to monitor and remind me when to eat, which worked a treat. At a few points throughout the day Alex would check how far we’d gone, and it was actually great to hear things like “that’s us done 100Kms, a third of the way there”, and later on “that’s us over half way”. So whilst I didn’t have the numbers staring at me from the screen it was a good boost each time he mentioned them.

After Moniaive we caught up with 2 guys and ended up cycling most of the way back with them. Initially we were going to let them go as we knew that they’d been faster than us (and I was conscious I didn’t want to bust). However, it turned out one of them had gone too hard early on and was really beginning to struggle. Instead of us drafting being them they ended up drafting behind the two of us. Was nice to have others to chat with as we headed towards familiar roads, as I found myself pointing out local landmarks (or cycling obstacles to watch out for). All the way from Dalmellington to Ayr I definitely got an adrenaline boost from local knowledge and found myself flying up hills even though I should’ve been tired after hours in the saddle.

The goal for the ride is to arrive in Ayr before sunset – well we made that with hours to spare, as we rolled into Ayr just after 17:30, only 13 1/4 hours after we’d started in Whitley Bay. The post cycle beer and chips were much enjoyed before a short spin home. Overall, a great day out and certainly an achievement to cycle over 320Km (200 miles) in a day. The full records haven’t been released yet from Chase the Sun, but we were in the early arrivals back to Ayr with others continuing to arrive until long after sunset. I think we were fast asleep before the sunset!