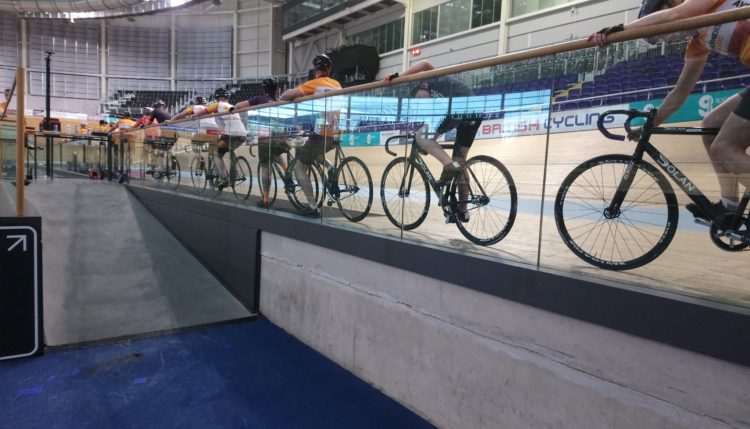 Sunday afternoon saw 24 Burners invade the Sir Chris Hoy Velodrome for another track session. For many this was the first time riding round in circles following whoever was in front (apart from Saturday morning rides when Duncan isn’t there !!!).

The group was split into those who’d been before, and those who hadn’t been on track before – or so they claimed ….. Whatever group they were in, everyone was impressed by the banking and didn’t believe they’d soon be riding their bikes up that high.

Fiona Walker was on hand to give suitable direction to both groups, and ensured that everyone made it round safely (thanks, Fiona). There were some nervous smiles as the newbies made their way up onto the track for the first time, but these were replaced by Cheshire cat grins by the time the first session ended.

groups so everyone had a generous amount of track time. The pace of both groups increased from session to session and, by the end, confidence levels had increased as much as the speed.

race, which was won by Gary Currie. Nothing to do with the electric motor in his suspiciously chunky down-tube though (only kidding, Gary – you were flying) !

The Velodrome is a fantastic facility, and everyone had a great time. It’s a measure of the impact of the afternoon that teenagers (of all ages) were searching for track-bikes on eBay on the way home !!! Who knows, maybe we’ll look into the possibility of doing accreditation next ….

Big thanks to JP for organising the afternoon (can we go again next week ?) and to Scott for ferrying a bunch of us up in the mini-bus.

Everesting and Strava Series Round 3 – Tour of the Alps 2019