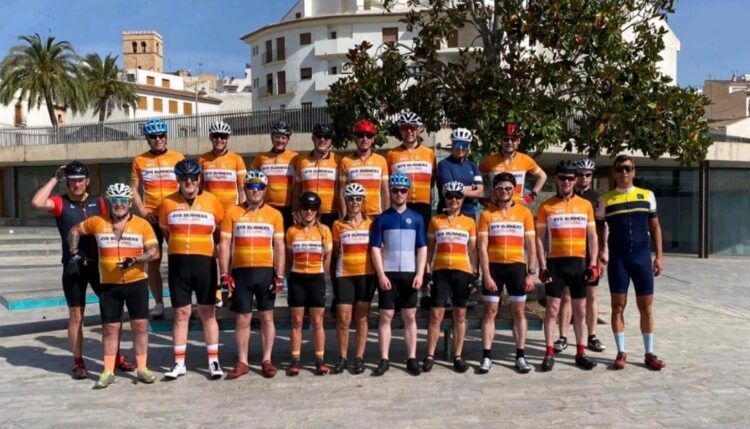 Our long-awaited trip to Xabia finally took place towards the end of May, and the unanimous view was that it was a fantastic, if challenging, long weekend. Sixteen Burners flew out from Prestwick on the Friday, catching up with Martin Carmichael, Jon Mahoney and Scott McKendrick who had gone for an extra day or two in the sunshine.

After an hour or so in the minibus from Alicante Airport, we arrived at Blanca Bikes – just in time for Peter (our host) to give us a quick rundown of what was in store for us over the weekend, before heading to the local square for a much needed (and very tasty) meal.

The next morning saw us setting up our hire bikes before heading out for the first days ride – a loop over the Coll de Rates. As we lined up for an early photoshoot, the temperature was already into the mid to high 30s – where it pretty much stayed for the rest of the weekend.

The Coll de Rates is about 6.5km long at an average of 5%, but the heat seemed to make it feel longer and steeper. After re-grouping at the top we headed for the lunch stop, which involved negotiating some ‘undulations’ – which were as strength-sapping as the Coll itself.

The good news was that lunch was more than half way round (34 miles) and the remaining 26 miles back to base were downhill. Indeed they were (apart from the uphill bits !!!) and the legs got a bit of a rest in the afternoon.

That evening, we had a Paella Night in Blanca Bikes which was thoroughly enjoyed by all. Everyone managed to replenish all the fluids they’d lost that day too !!!

On the second day we split into 2 groups heading in roughly the same direction, but with one group not facing the delights of the Vall D’Ebo (longer, steeper and hotter than Coll de Rates). In the end, the mileage and elevation of both groups was very similar. It was a tough day for all, but it was all smiles when we met up at a cafe by the Med to reflect on the day’s events.

That evening, another fine meal was had (outdoors in shorts and t-shirts from 8-10pm) at a local restaurant. Peter had booked it in advance for us, so all we had to do was turn up, eat and drink.

Sadly, the next day was the final day although our flight back to Prestwick wasn’t until 9.30pm. Some of us went for a walk down to the Med, stopping at a cafe or two while the rest took the bikes for a gentle spin over to Moraira, 8 miles or so away.

Ryanair had suggested it would be a good idea to get back to Alicante early, to avoid delays at security / passport control. Despite the scenes that have been on the TV news recently, there was no delay whatsoever so we had the pleasures of the airport to endure for about 5 hours (the only downside to the whole weekend).

All in all, it was an excellent trip that had it all – friendly and knowledgeable host and guide, lovely staff, great weather, good food and drink, nice bikes, fab if challenging cycling, spotlessly clean accommodation and a great bunch of folk who got on really well together. Oh, and a jacuzzi and a plunge pool (photos available on request …).

The key question now is when, not if, we go back ? Watch out for more on that later ….