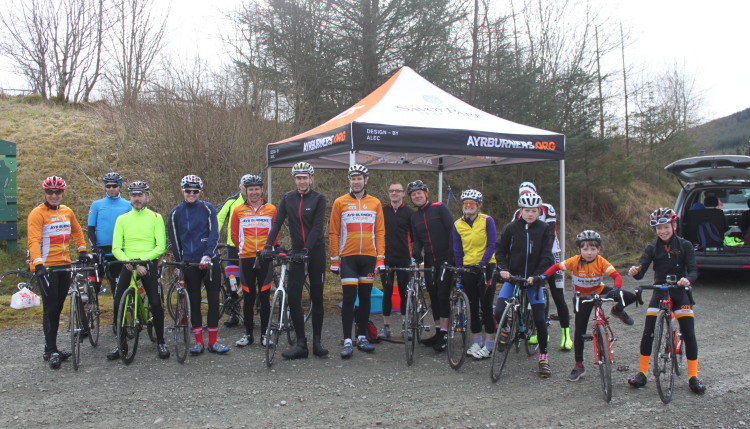 Special thanks to Kevin Pugh for his account of our second challenge of 2016: ‘Everesting’ on Nic O Balloch

Firstly, I’d just like to say I’ll be glad if I don’t have to see any more hills in the next few weeks!… Oh wait, there’s the Arran Daytrip this Sunday March 20th – There goes that plan!

‘Everesting’ is simply doing enough repetitions of any hill to reach an accumulated ascent of 8,848metres, that of Mount Everest. In this case doing the Nic O Balloch, in the Ayrshire Alps, at 248m over 3.5km on each ascent would require 36 ascents in total. Daunting task!

Driving to the “basecamp” was lovely, nice climate and perfect temperature- that may just have been the A/C and heated seats but I digress… The weather was looking spot on, dry, sunny and just a nice cool breeze to boot. I wish I had cycled down some of these fine roads rather than taking the car buy hey-ho!

Having arrived early with nobody in sight, no phone signal, and not a clue if I was in the correct area I decided to drive around, not too long did I see some Burners jerseys over the brew of the hill. It’s happening, and all too soon!

The plan was to do tthe challenge in teams of 4-8 riders. As Chris J-G brought only two buckets to seperate the team chips (I thought we were going high tech, turns out we were to retrieve clothes pegs instead, and blue ones at that!) we had settled with two teams. The stronger team consisted of six riders: JohnPaul Baxter, Rod Henderson, Will Jackson, Harry McGarvie, Davie Fulton and Scott Knox requiring 6 ascents each, the second team consisted of ten riders: myself (Kevin P), Jonny Burns, Jo Baxter, Max McGarvie (age 7), Cammy McGarvie, Duncan Macarthur, Chris JG, David Toner, Chris Scott, Gary Higgins and Robert Gemmell.  Thanks to the various guests who helped us along the way too, including Keith McKissock and Paul McGimpsey.

Having set up the gazebo and had our quick briefing, selfies, and farewells, we were on our way down to the start fueled by the desire of obtaining challenge bonus points: 10 for each ascent, and 100 for achieving the ‘Everesting’ goal.

Max rings encouragement for Jo. We’re surprised he had the energy after towing his dad Lindsay all the way to the top

The first section is the steepest with a 20% kick round the first corner heading up to HQ, definitely out of the saddle time for myself on the fixed-gear (46:22). From there it’s still quite steep climbing up through some twists and turns. There’s no rest but it does eventually ‘flatten’ out to a steadyish 6-8% to the summit. Along the way there are some interesting features such as the cattle grid which totally eats up your speed, rhythm and energy (not to mentioned loosening any fillings in you teeth you may have had). One way to ease the pain of the cattle grid was to ride along the flat bar, if after the 3rd or 4th ascent you still had the mental capacity to accurately guide your stead over the 2” piece of heaven. Another notable moment, purely for the relief it brings, is hitting the plateau just as you ride over the old bridge, this only lasts a few pedal strokes but what fine pedal strokes they are! Up and onwards, again, a nice steady rise albeit with a little wind and a little kick at the summit to reach a high tech clothes peg!

Kevin on his fixed wheel machine – maximum kudos points for each descent, never mind the ascent!

The descent for some looked absolutely joyous, flying down the same road they had just struggled up, or in young Harry’s case “bossed” up! For me, I had to control my cadence from 1. stopping my legs falling off & 2. stopping myself looking like I was in a cartoon as my legs were touching 150rpm! Most people had taken a little breather and sustenance when dropping their prized peg into he appropriate bucket. Some opted to head straight back to the start for another immediate rep, such as JP and a few other lads, obviously the keen type. 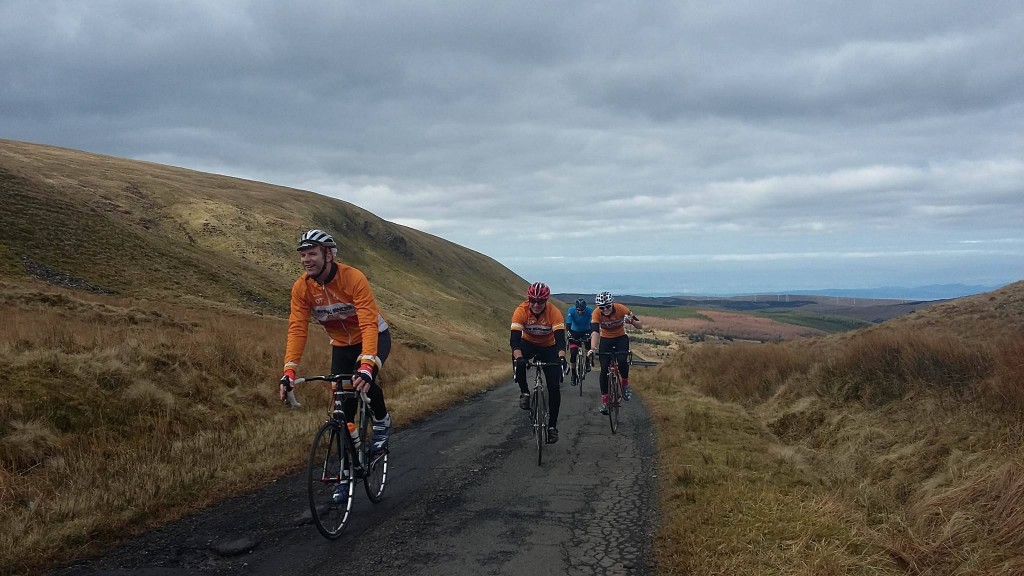 In the end, even after our late start and early finish, both teams managed to ‘Everest’ the Nic O Balloch and then some! Pegs in buckets don’t lie, and 97 tokens were collected – The team of 6 managed 41 ascents in total, and the team of 10 managed 56 ascents in total. Everyone had put in a great shift and I think most had underestimated their ability by achieving more reps than they thought they would. Harry & Joanne churned out a whoppin’ (no G) 7 reps showing the *ahem* senior men how it’s done! Well done, hats off! 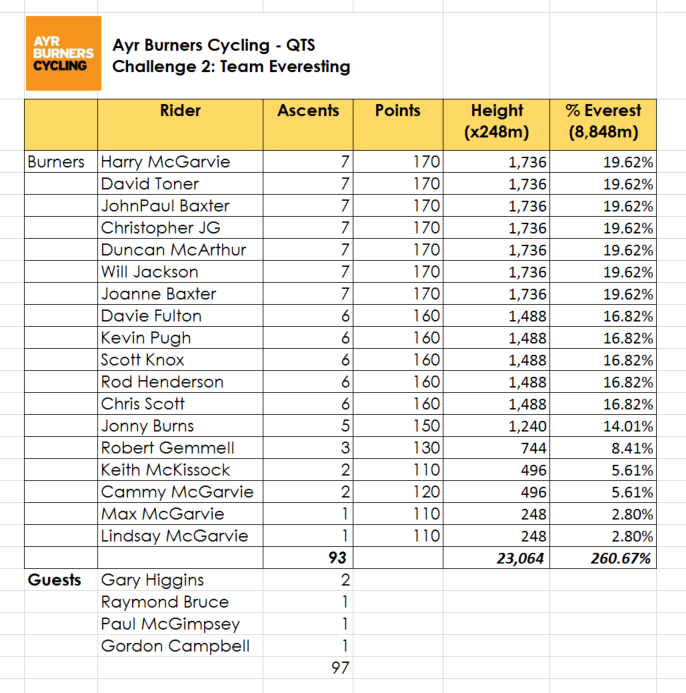 All in all it was a fantastic day, minimal traffic, great weather, great folk, banter, and smiles all around. I can’t think of anything better to do on a Sunday morning… just don’t ask me to do it next Sunday morning!

The 97th clothes peg, as pinched by Will Jackson 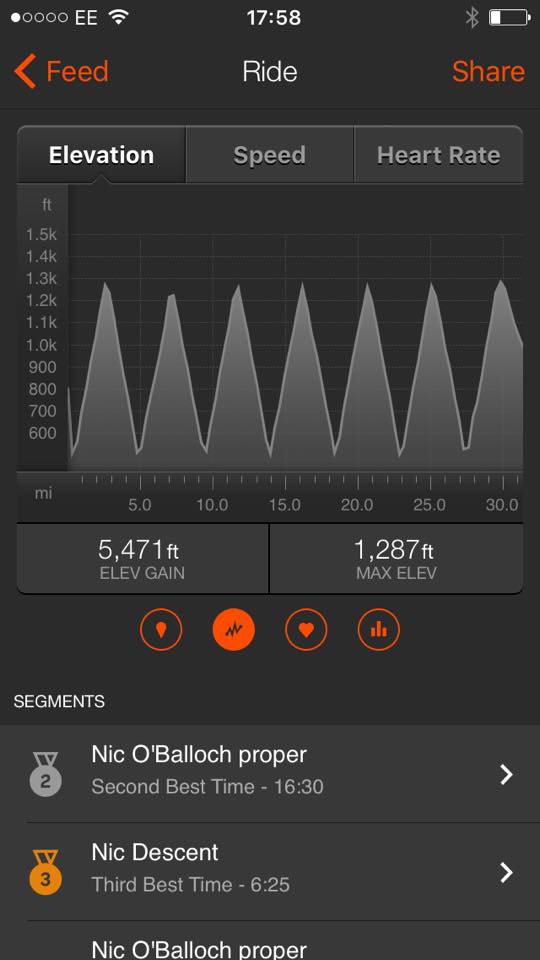 Will Jackson’s very own strava art