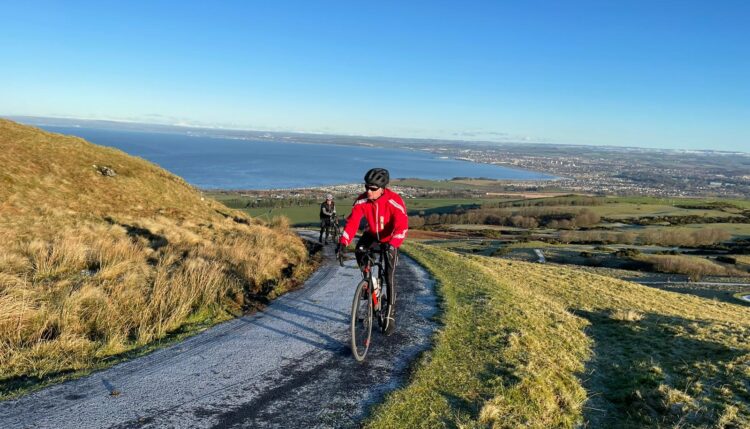 Happy New Year and welcome to 2021 to all Burners, friends, family and sponsors (more on that on a forthcoming post) – let’s hope it’s an improvement on 2020 !!!

As usual, 1st January saw us gathering for the traditional New Year’s Day ride. However, as well as the long-standing ride up to the Masts, this year we also had an alternative for those too sensible to take on the ice-clad slopes. This took the shape of a Beach Ride from Newton shore up to Troon.

For the Mast ride, the wintry conditions saw a reduced turnout of 15 brave (or is that fool-hardy ?) riders. Social distancing regulations saw us split into 3 groups – one heading out the coast road, another taking the Nether Auchendrane route, and a group on MTBs ploughing over anything in their path.

Frost and ice meant that progress up to the masts was slower than usual, with a few spills en-route. Thankfully, these were all at walking pace and no injuries were sustained – except to pride.

At the top we found the fabled Hermit of Carrick Hill. Closer inspection revealed it to be Gordon and his now famous tent. You find Burners in the most unexpected places !!!!

Unlike previous rides in better conditions, the descents were just as slow as the ascents. Surprisingly, there was only one unscheduled dismount on the way down (ask John D about it next time you see him) and everyone made it back to the Burns Museum in one piece.

Meanwhile, over at Newton, the ‘Sandy Seven’ headed for the trails and tracks featuring the Prestwick coastal path, Fullarton Woods and the Smuggler’s Trail. The good folks at Troon Promenade Kiosk supplied the hot drinks, while JP and Gary provided the warming liquers (single malt and mulled wine respectively).

We’re back to normal tomorrow with the 9.30 ride-out from the Burns Museum. It’ll be another cold one, but highly unlikely to be as challenging as today’s rides. Hopefully we’ll see you there !!!!