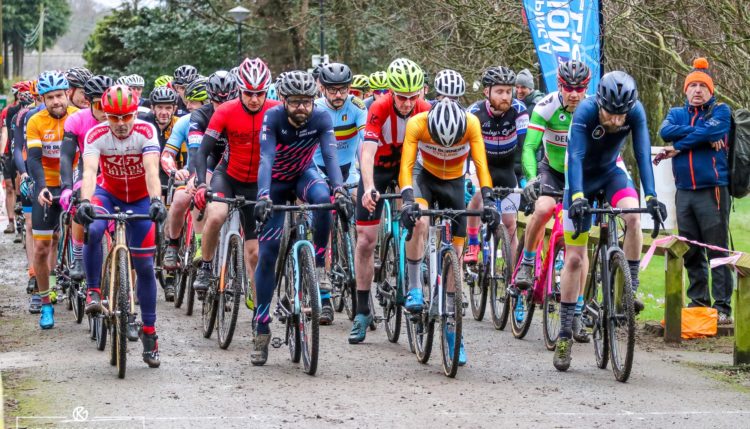 Rozelle Park in Ayr played host to the Scottish Super Quaich Cyclocross series on Sunday, on a day which saw youth come to the fore.   Seventeen-year-old Peebles CC rider Jonte Willins took top honours on the day, with an incredible ride that saw him battle back from last place on the grid.

Now in its sixth year, the sold-out Doonbank Trofee event once again proved to be a classic with a challenging course and testing conditions with heavy showers and squalling winds.   Supported by the Irvine Beach Cross team, the organisers put in an eight-hour shift on Saturday to get the course ready on time.

The action started early, with over forty children age 3+ taking on a 20 minute fun-ride before the racing began.   The unique format allowed riders the opportunity to sample cyclocross and complete as many laps of a 1km circuit as they wanted.    Despite waking up to a heavy deluge, there were smiles all around as mostly-local youngsters kicked off proceedings.

The racing began shortly after, as the U16 youth riders were the first to tackle the full course – featuring hurdles, stairs, mud and technical woodland.   Cole Nicholson and Beth Shaw came out on top, both with remarkable lap times that the leading adults struggled to match as the course chewed up.

At the front of proceedings, Peter Wilkin built up a lead of over one minute ahead of Alistair Dow and Calvin Price.  Wilkin kept up a remarkable pace throughout the second half of the race, with event officials struggling to ring the bell in time for his final lap.    Wilkin, Dow and Price all earned a promotion to the ‘A’ event at the final round of the Super Quaich series at Rouken Glen park in two weeks.

By the time of the main Super Quiach event the course was getting very heavy, with thick mud requiring riders to repeatedly dismount on the hilly side of the course.   With previous winners David Lines and Gary Macdonald missing, it was expected to be a fight at the front between SR Albannach’s John Mackenzie and local star Harry McGarvie of Ayr Burners QTS.   Indeed, when the whistle blew McGarvie won the ‘hole-shot’ sprint into the first corner with Mackenzie on his wheel.    Behind was a frightful crash on the start straight with 20riders going down right on the line.   Remarkably all but two stood up and raced on, with broken bikes causing two retirements.

The impact of the crash split the field early on, and a lead group of McGarvie, Mackenzie, Richard McDonald (Bioracer) and seasoned champ Craig Hardie (Hardie Bikes) took spells on the front.    However, the main story of the day was being written from behind.  Jonte Willins, a Team Scotland junior mountainbike rider, was fighting back from last place on the grid having been delayed by the opening crash, and making up huge ground.   Craig Hardie would later comment that he ‘got on Willins’ wheel for a split second as he ripped past me’.

Meanwhile, at the front of proceedings, Harry McGarvie lost precious ground with a front-wheel puncture, making the technical circuit even more challenging.   A heavy rain began to fall, coupled with strong southerly gusts.  It wasn’t long before Willin’s bridged up to McDonald and MacKenzie on the front, before going on to an empthatic win.

Although disappointed to miss the podium, Harry McGarvie’s 4th place was enough to defend his regional title, leading an all Ayr Burners’ podium in the Scottish Cycling South West championships.  Team mates Ross McCulloch and James Edwards completed the clean sweep for the hosts.

Roslynn Newman showed no signs of slowing down, finishing well clear of Vicky Woodburn and Helen Winton who had a tight battle for the podium places in the women’s event.

Event organisers JohnPaul Baxter and Christopher Johnson thanked the many volunteers and friends of Ayr Burners Cycling QTS for putting in a heroic effort to transform Rozelle into a top-class cyclocross venue, and praised all the kids, mums and dads who had braved the morning weather for the fun ride.

As the last equipment was loaded into the van after sundown the event team could finally pause and look back on another fantastic day of cyclocross in Ayr.