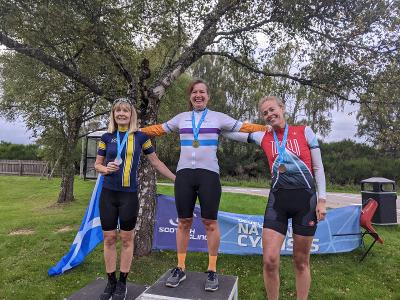 Huge congratulations from everyone at the Burners go to Jude, who won the Scottish Road Race V50 title in Kincraig last weekend.

It was fast and furious from the start, with riders racing for the Junior and Veteran Scottish titles as well as the overall race victory, and a handful of competitors were distanced early on as the main bunch flew from Kincraig down to Kingussie.

Although the peloton was comprised of riders who covered the various license and age categories, the race stayed together and continued to move at a swift pace.

In previous editions of the race, it’s been twice up the Kirk Brae in Kincraig for the riders with the finish at the top, but this year the riders had to endure another lap of the stunning course based around Loch Insh.

It’s a long, uphill drag to the line but finishing strongly in the bunch was Jude to take the V50 title – a mere 7 seconds behind the overall winner and 14th overall !!! She edged out Karen Knight (Dundee Wheelers CC) and Fiona Cockburn (Torvelo Racing) who rounded out the top three in that age category.

Big thanks go to the Cairngorm CC – the organising team. Without such volunteers, exciting racing at this level, on such a picturesque course, just wouldn’t happen.

Saturday morning saw Jude return to our regular social ride, resplendent in the champions jersey – well done from us all 🥇